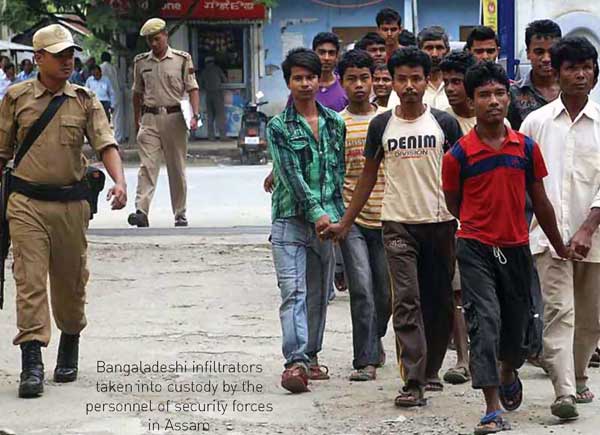 Four-time US president, Franklin Roosevelt could never forget his ancestral roots—in Denmark and in France. As I am putting down my thoughts on this topic, his famous words ring in my ears: “Remember, remember always, that all of us, and you and I especially, are descended from immigrants and revolutionists”.

Geographically, the fifth longest land-border in the world, the 4096- kilometer-long India-Bangladesh border is highly porous…Given the situation it is almost impossible to stop illegal immigration without strict measures and co-operation from both the countries.

My ancestors were also immigrants and my roots remain in Dhaka (now in Bangladesh). Hence, I strongly feel, unless there is a very good reason nobody leaves their home—their original homeland. Immigration is a worldwide phenomenon since time immemorial. According to the United Nations, almost 200 million individuals, about 3 per cent of the world’s population, live outside the country where they were born. Over 100 million migrants live in the more developed regions of the world, including 9 million in Northern Europe, 22 million in Western Europe, and 38 million in the United States. Successive waves of immigrants in these countries kept them demographically young, enriched their culture, added productive capacity to the nation and enhanced their influence in the world.

In the United States the immigrants have been bringing innovative ideas and entrepreneurial spirit to their economy. In Canada, according to a study of the Conference Board of Canada, immigrants helped in boosting Canada’s stature in innovation, which ranks 14th out of 17 industrialised countries. In India Noble laureate Amartya Sen has his origins in Bangladesh. Therefore, immigration is not unwelcome in any country but illegal immigration has always had undesirable consequences. The policymakers of any country need to counter this diplomatically and through policy framework. Having said that, it is an extremely difficult job. Journalist, R Jagannathan pointed out that: “The pressure of land and population on the Bangladeshi side is simply too immense to contain them there. This is why immigration, legal or illegal, has been consistently in one direction—towards India—for over a century now.” Therefore illegal immigration is a major bone of the contention between Bangladesh and India.

Geographically, the fifth longest land-border in the world, the 4096- kilometer-long India-Bangladesh border is highly porous. The border areas are densely populated. The land is extremely fertile and is cultivated right up to the border pillars. Sometimes the border passes right through the villages, even building constructions. As a result, members of the same ethnic or religious community live on either side of the border. Given the situation it is almost impossible to stop illegal immigration without strict measures and co-operation from both the countries. An illegal immigrant in India is a person residing in the country without an official permission as prescribed by Indian law but those who are explicitly granted refugee status do not fall under this category.

Muslim population growth rates in the Border-States Assam and West Bengal were found to be much higher than the growth rates of the local Hindu population even after adjusting for the usual higher growth rate of Muslims throughout the country.

Historically, decades prior to partition, there was a flow of Muslims from East Bengal to states like Assam, where they came in search of a better livelihood. Under colonial rule Assam was sparsely populated and the British, who wanted to exploit the resources from the region brought labour from East Bengal. Internal migration was normal within East Bengal (now Bangladesh), West Bengal and Assam. In 1947, the partition triggered a large exodus of people from East Pakistan (now Bangladesh), and most of the immigrants were Hindus. Second mass migration was in 1971. The Bangladesh Liberation War and unending political and economic turmoil in Bangladesh in the following decades compelled many Bangladeshis to seek refuge in India. The vast majority of them were illegal.

During the Bangladesh Liberation War at least 10 million Bangladeshis crossed the borders into India illegally to seek refuge from widespread rape and genocide. Most of them migrated to the Border States, particularly to West Bengal and Assam. This matter became more visible in 1991 census. Muslim population growth rates in the Border-States Assam and West Bengal were found to be much higher than the growth rates of the local Hindu population even after adjusting for the usual higher growth rate of Muslims throughout the country. Realising the ground reality, the Government of India had decided to make any person from Bangladesh, who came to India illegally till 1971 as legal. Therefore, this population is considered to be Indian and their rights are protected.

In order to understand what drives immigration from Bangladesh apart from the above two calamities, we have to analyse the basic causes. The major reasons are socio-political discord, natural calamities, communal riots, and poor economic prospects. Amongst these the economic issue has been the most dominant factor. In spite of deportation, preventing the flow of immigrants from Bangladesh has been very difficult. The porous border also makes it easy for deportees to return. Despite the economic progress Bangladesh has made since its independence, the country still remains one of the poorest in the world, with more than 40 million people living in utter poverty. Moreover, the trip to India from Bangladesh is one of the cheapest in the world, around Rs. 2000-2500, including the fee for the ‘Tour Operator’. As Bangladeshi’s are culturally similar to the Bengali people in India, they are able to pass off as Indian citizens and settle down in any part of India to establish a future for a very small price. The false identity can be acquired for a paltry sum of Rs.200-300.

According to some estimate, there are close to 20-30 million illegal Bangladeshi immigrants in India.

According to some estimate, there are close to 20-30 million illegal Bangladeshi immigrants in India. No reliable numbers on illegal immigrants are currently available. No systematic surveys have been done to identify illegal Bangladeshis. They are on electoral rolls and they acquire ration and Aadhaar cards by spending little or no money. They are no longer restricted to the bordering states of Assam, West Bengal, Meghalaya, Tripura and Mizoram but virtually everywhere.

Impact of illegal immigrants varies from one state to another. The Indian side of the Indo-Bangla border passes through West Bengal (2,216.7km), Assam (263km), Meghalaya (443km), Tripura (856km) and Mizoram (318km). If we analyse it state wise, the most adversely affected state has been Assam. According to the historian Kanchan Gupta: “Assam is facing external aggression and internal disturbance on account of large-scale illegal migration of Bangladeshi nationals”. In Assam, agitation against immigrants started as early as 1979, led by All Assam Students Union. Their demand was to put a stop on the influx of immigrants and deportation of those who have already settled. It gradually took a hostile form and ethnic violence started between Assamese and Bengalis, mostly Muslims.

At the end of 1982 the movement was escalated when the central government decided to hold an election in Assam without revising the electoral rolls, which was the demand of the agitators. The leaders of the movement called for a boycott of the election, and during the election period numerous violent incidents occurred—the Nellie massacre being one of the biggest. According to Antara Datta, this massacre was one of the largest and most severe pogroms since the Second World War. The Nellie massacre resulted in 5,000 casualties. Surprisingly, no investigation of the incident was ever been done. The All Assam Students Union (AASU) denied any involvement in the massacre, and since then there have been no instances of communal violence in Upper Assam. In 1985 the ‘Assam Accord’ was signed. This was a ‘Memorandum of Settlement’ between the Central Government and the leaders of the ‘Assam Movement’. The accord brought an end to the Assam Agitation and paved the way for the leaders of the agitation to form a political party and form a Government in Assam soon after.

Major political forces including Islamic fundamentalists operating in Bangladesh as well as in India have been encouraging Muslim infiltration to expand Islamic influence in the border region.

As per the accord India started building a fence along the Assam-Bangladesh border, which is now almost complete. However, Assam also has a large number of genuine Indian Muslim Bengalis. It is difficult to distinguish between illegal Bangladeshis and Bengali speaking locals. In some cases, genuine Indian citizens have been discriminated. This has been a highly emotive issue, especially in states like Assam, and one that cannot be ignored.

West Bengal is another State badly affected by illegal immigrants but remained mostly calm because of the vote bank politics of the successive Governments—CPM and Trinamool. The illegal Bangladeshi migrants have been trickling down into many parts of rural Bengal, like Nandigram, over the years, and settled down as sharecroppers with the help of the then local Left leaders. The majority of these immigrants became tillers and so they lacked documents to prove the ownership of land. Hindu-Muslim proportion in the border villages significantly changed due to illegal immigration. Many of the one-time Hindu majority border villages have now turned into Muslim majority villages.

Major political forces including Islamic fundamentalists operating in Bangladesh as well as in India have been encouraging Muslim infiltration to expand Islamic influence in the border region. A study of five villages—Gunarajpur, Keutsa, Mathurapur, Hogolbaria, Routbati taken from police station of like Gunarajpur, Keutsa, Mathurapur, Hogolbaria and Routbati respectively, shows a drastic increase in Muslim population. An investigation of 30 families of the illegal immigrants shows very high incidents of crimes like murder, rape, dacoity etc. Incidents of organised crimes in connivance with Bangladeshi Muslim and other criminals, coupled with no legal actions from the local administration (the police, the Panchayats etc.) and the party in power to keep intact the Muslim vote-bank forced many Hindu families to move to other interior Hindu dominated areas. The local Hindus have been selling their ancestral home at throw-away prices to the Muslims.

The author has worked in senior positions in various multinationals.