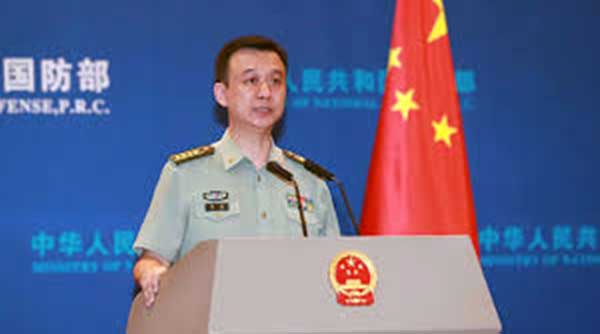 Colonel Zhang Shuili, the spokesperson of the Western Theatre Command issued a statement on the situation on the China-India border and pointed out:

On 31 August, the Indian army broke the consensus reached at previous multilevel talks between the two sides and once again illegally crossed the boundary line on the South Bank of the Pangong Lake and near the Reqin Mountain Pass. This is blatant provocation and has caused tension on the LAC. This belligerent act by India is serious violation of China’s territorial sovereignty, and severely undermines peace and stability of the Sino-Indian border area. This is an act of betrayal and serious breach of trust.

China strongly opposes it. We earnestly urge India to immediately withdraw its troops, which has illegally crossed into and has occupied Chinese territory, to strictly control and restrain its frontline troops, to earnestly abide by its commitments and to avoid further escalation of the situation. The Chinese military is taking necessary countermeasures and will closely monitor the developments and will resolutely safeguard China’s territorial sovereignty and peace and stability in the border areas.

This is really bizarre!

Not long ago, China and India quickly initiated multilevel military talks on issues such as border skirmishes, violent clashes and on the heavy casualties suffered by the Indian army (in Galwan Valley). The two sides reached a series of agreements to withdraw their troops from the areas of confrontation. This led to gradual easing of tensions and things started moving in a good direction. Aware that winter is approaching on the border frontier where the temperature drops sharply, the mountains are blocked with ice and snow in the Pangong Lake area which is 4500 meters above sea level, the basic survival becomes extremely difficult. It is surprising how could the Indian army suddenly risk the huge climate and survival challenges?

If things go wrong, there must be a demon!

What is it that India wants?

Let me come straight to the point and not beat around the bush.

Firstly, the fundamental purpose why India has resorted to the latest provocative action is to create justification in order to pave way for America to deploy its intermediate-range missiles in India.

In mid-August, the US formally announced “it is contemplating to deploy intermediate-range missiles in an Asian friendly nation including Japan.” The US Department of Defence also announced that it will expedite the selection of missile deployment positions.

The US plan to deploy missiles in Asia is 100% aimed at China.

I have already pointed this out in an article published the day before yesterday. The real reason behind Prime Minister Abe’s decision to step down is not his health but his inability to withstand the US pressure on him to agree to the deployment of the US intermediate-range missiles in Japan.

As it can be seen, the US deployment of intermediate-range missiles in Japan is not only facing the problem of uncertainty but there is also the issue of Japan’s close proximity to China.

Therefore, India has become the preferred choice for the US to deploy intermediate-range missiles.

I am absolutely certain there have already been countless secret meetings between the leaders of the two countries over the issue. I am also sure the two sides – The US and India – have reached a secret agreement, ie, America will deploy intermediate-range missiles in India which will be targeted at China.

Now, in order for America to achieve this goal, what is required is a perfect pitch, ie, create an atmosphere of “China threat” in the Indian popular perception. Only by doing this, all people and political parties in India can easily be rallied around for support, while other nations can also “understand and extend their support.”

Secondly, India is fully responding to the Trump administration’s “Trouble China Diplomacy” and trying to reap full benefits of the situation in order to harm China.

In order to ensure his re-election, president Trump is determined to play the “China card.”

Trump, early on tasted the sweet result of playing “the China card,” and each time he [Trump] slanders and attacks China, his anti-China masculine, insidious, destructive and ruthless tricks can earn him great political mileage and that is why President Trump has been becoming more and more provocative and aggressive against China.

While India has recently seen the US intensify its diplomatic, economic and military confrontations with China and aggressively provoke China, India too has become proactively belligerent against China. But what India has not been able to see is China’s strong counterattack measures and continuous protests against America. On the contrary, India believes China has gone “soft” and China is unable to face the challenges coming from the US and India at the same time. India therefore thinks China will be extremely defensive and will not dare do wrong calculation. So, India has decided to take advantage of the situation.

I have no doubts that India has been indulging –actively or passively – in secretive talks with the United States, that both India and America have reached an agreement, that the US has been encouraging India and has promised many guarantees to India.

India has always liked to take advantage of others when their homes are on fire, and the Sino-Indian war in 1962 is a classic example of this Indian character. At that time, India decided to take advantage of the troubled Sino-Soviet relations, China’s three successive drought years, riots in Xinjiang and the just ended rebellion in Tibet, and launched large-scale military offensive against China. But what did India gain? The outcome was the death of Prime Minister Nehru caused due to humiliation, loss of face and the disastrous defeat India suffered.

Influenced and perhaps also convinced by the US intelligence reports, India thinks China is all set to bring about military solution to the Taiwan issue.

In a joint essay published not long ago, former Deputy Director of the Central Intelligence Agency (CIA) Michael Morell and former Admiral James Winnefeld have warned that China plans to resolve the Taiwan problem by mid-January 2021, within three days of the new US President taking over office.

One must be aware both Morell and Winnefeld have been formerly in charge of the US core intelligence and secret information gathering agencies. Their writing and publishing such details publicly is certainly not “academic research” but top “authoritative opinion.” Leaking such information too is deliberate.

It is quite obvious that India either accepts this US analysis or India is drawing its own conclusions.

India, it seems, is very clear that once China has resolved Taiwan problem, China will no longer be bogged down with worries and other concerns and will have all its energies to concentrate on dealing with India and on resolving territorial dispute between China and India.

Hence, once India has arrived at the conclusion that China is going to resolve the Taiwan problem in the near future, India will definitely become proactive in trying to prevent China from realizing the cross-strait reunification.

The means to prevent China from realizing cross-strait reunification is to create tensions and cause armed conflict – even small-scale – on the Sino-Indian border. This will immediately put China under the pressure of fighting on two sides and therefore dare not easily use force against Taiwan.

For India sees the current situation in the Taiwan Strait as some sort of security guarantee for itself.

This is the assessment the author has arrived at, based on the following five factors:

•  Both the US and India have considered China as their country’s “number one enemy,” and containing China’s development and confronting China are their common diplomatic strategies;

•  India is fully aware its national comprehensive strength and military firepower are no match to China, and India will need the US support in order to challenge China. Therefore, India even plans to become an ally of the United States;

•  There is no dearth of number of military adventurists within middle and top ranks of the Indian army and military expansion is their “motto”;

•  The Indian people generally have very serious blind “confidence.” Even during the Sino-Indian war in 1962, the people of India harboured the notion that China was a weak opponent;

•  The Indian army is choked with “Galwan Valley humiliation” and is ever ready to go for revenge.

This above explains the latest (29 & 30 August, 2020) act of crossing into Chinese side to occupy Chinese territory by the Indian army in Pangong Tso Lake South Bank area and in Reqin Mountain Pass area. In addition to cross the LAC and illegally occupy Chinese territory, the real intention of the Indian army is to lure the PLA into action, to recreate border tensions and even provoke a war.

Once such a situation takes place, the Indian government then will have enough grounds to garner people’s support and mobilize various opposition political parties to allow the United States to deploy intermediate-range missiles targeted against China in India. Thus, India will realize its goal of the US-India alliance.

The author therefore wants you to consider these four points:

•  Strengthen concentration, exercise restraint: Don’t be fooled and be taken for a ride; insist on a peaceful solution; resolve current crisis through dialogue and consultation; and win support from the international community.

•  Seize the opportunity, unify the motherland. Before the US has the time to deploy intermediate-range missiles in India and fortifies its preparedness, speedily resolve the Taiwan Strait reunification issue. Such a move will render the US deployment of missiles useless and of no practical significance.

•  Weigh pros and cons, go for the maximum advantage: In the face of extreme provocation by the Indian army, it would be wise to rather suffer a temporary loss and first resolve the Taiwan reunification issue. Then go back and regain the lost ground, and regain the South Tibet and other areas all at one go.

Be vigilant and coordinate timing: If India succeeds in encroaching (our territory in Galwan Valley area) or starts a war, then adjust our priorities and first focus on regaining South Tibet and other areas under the Indian occupation.