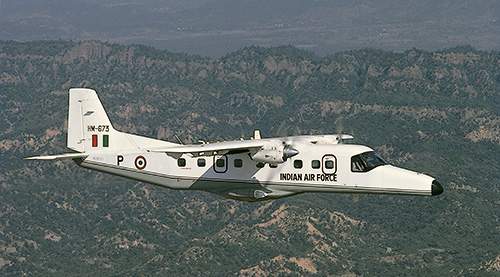 When one examines the air arms of the islands of the Commonwealth Caribbean, Guyana and Suriname, it is evident that a yawning gap in defence preparedness is emerging in the form of an acute shortage of maritime reconnaissance and light transport aircraft (MR/LTA). As the regional inventory of such aircraft, which currently comprise an eclectic mix of ageing civil transports of dubious serviceability, rapidly decline in serviceability and utility, the need for replacements to meet the pressing requirements of the respective air arms is becoming acute. This emerging demand for aircraft that can fulfil the dual role of maritime reconnaissance and transport could present an opportunity for Indian equipment such as the Dornier Do-228 to make its debut in the region.

The geographical location of the Caribbean means that its primary security challenges are either directly or indirectly linked to maritime issues – be it the smuggling of illegal narcotics and weapons, human trafficking, illegal fishing or protection of natural resources and mineral deposits. Even mainland countries like Guyana and Suriname face a significant challenge in their respective maritime domains. Furthermore, light transport aircraft have proven to be an important asset, with Guyana and Suriname making extensive use of their few serviceable aircraft to augment poor rail and road communications in their hinterlands. The ability to move troops and relief supplies has also been very useful at times of natural disasters, with Jamaican, Guyanese and Trinidadian aircraft being heavily committed to that task during hurricane season when smaller islands require assistance from their larger neighbours.

The current inventory of aircraft available to Caribbean air arms is both eclectic and of very modest capabilities, comprised as they are of light liaison aircraft and small cargo transporters. Given this inventory, an examination of the light transport/maritime reconnaissance inventories in the air arms of the Bahamas, Barbados, Guyana Jamaica, Suriname and Trinidad & Tobago would show that India has an opportunity to capture this market if it shows the necessary initiative combined with an appreciation that this effort cannot be transactional and must be part of a broader engagement with the region, an offshoot of which could be the establishment of local MRO and servicing facilities.

It is glaringly obvious that the meagre assets available to Caribbean air arms are inadequate to meet existing requirements, not to mention future challenges. This was recognized by the United States as far back as 1999, when, to bolster resources that were even more pathetic, deliveries of C-26 and Piper Navajo aircraft were made to Barbados and Trinidad. The Piper Navajos have long been retired but the C-26 fleet soldiers on despite a severe shortage of spares and poor maintenance, as do the eclectic fleet operated by other countries. It should also be noted that not only is the above fleet ageing, in many instances the aircraft were not new to begin with, the C-26s being eight years old when received, and the Piper Navajos being seized from narcotics couriers.

However, other than one each of the Trinidadian and Barbadian C-26s, which have a comprehensive maritime surveillance suite, inclusive of radar and FLIR, none of the other aircraft on strength have any sensor array suited to their assigned task of maritime patrol or even search and rescue. Suriname’s CASA C-212s were fitted with surveillance equipment and for a period were highly effective. However, budgetary issues, spares shortages and the lack of maintenance facilities in the region crippled Suriname’s efforts to keep the aircraft in service. The BN-2A Islander gave years of good service to the Guyanese, Surinamese and Jamaican air arms but only of these now remains in service with Suriname’s air force after Guyana’s BN-2A crashed and Jamaica withdrew its two aircraft from use. The Cessnas that make up the remaining inventory are standard civilian models with very limited capabilities for any task.

These Caribbean air arms have long recognized that their MR/LTA assets are wholly inadequate and in dire need of replacement. However, their traditional benefactor – the United States – has no appropriate aircraft to offer and limited budgets preclude the purchase of aircraft from the open market. The opportunity exists for a supplier, willing to supply aircraft either as gifts or at subsidized prices, to make a breakthrough.

It is here that India can become a player of significance as its current MR/ LTA – the Dornier Do-228 – is admirably suited to meet the requirements of Caribbean Air Arms. What is more, India has had a history of supplying the aircraft in its MR configuration to the Seychelles and Mauritius on very attractive terms – even as gifts in some circumstances. India may also still have a number of BN-2 Islanders in serviceable condition as well as a stock of spares (India has supplied spares to Mauritius for its sole Islander) which could be supplied to Caribbean forces as their replacement by Do-228s takes place in the Indian Navy. Furthermore, as LTAs, the Indian Dornier with its record of good performance in a variety of terrains and climatic conditions can offer a versatile solution to Caribbean air arms. The latter point cannot be understated as Indian Do-228s have operated from the Thar Desert to the jungles of the North East and the mountains of Jammu & Kashmir, in addition to operating effectively in the marine environment.

It should be noted that the Dornier Do-228 was marketed to Trinidad & Tobago in the late 1990s as a MR aircraft, but the arrival of the C-26s and Piper Navajos as gifts from the United States ended any possibility of an order. Now, with the American option no longer available, it is perhaps time for India to once again make a pitch to the region. To date, India’s aerospace presence is limited to a handful of Chetak helicopters in Surinamese service (following the withdrawal of the Dhruv from Ecuadorean service). An opportunity exists to change this.

It would be a mistake for India to view any effort in this regard in commercial terms. India cannot expect market prices for its aircraft. Given the very small number of aircraft involved, India could enhance its influence in the region by subsidizing the supply of aircraft to these countries. Looking at the larger Latin America-Caribbean region, with the Embraer EMB-110 and EMB-111 MR/ LTA coming to the end of their service lives, India could position itself to provide a replacement by establishing regional MRO and support facilities. Seizing this opportunity could open the regional market for Indian aerospace products. It is a low-risk gamble that is worth taking.