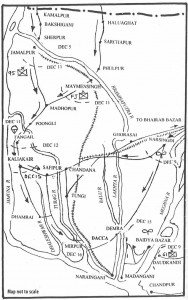 The 2 PARA Group, meanwhile, proceeded to their objective, the bridge on Turag River and captured it. They quickly dug in and Waited for the enemy. The first to appear at around 2030 hours was a Pakistani Light Battery (mortars). Its leading vehicle received a direct hit from an anti tank rocket and was destroyed. Thereafter, more troops of Pakistani 93 Brigade collected in the area. They organised an attack on the bridge during the night. The attack was beaten back with heavy casualties. That night and till 1300 hours December 12, the enemy mounted a number of attacks on the bridge. 2 PARA held firm. The enemy lost 344 soldiers, killed, wounded or taken prisoner. After 1300 hours, the Pakistani troops stopped trying to recapture the bridge. They abandoned their vehicles and equipment and tried to make their way across the Turag River in small groups by river craft.

95 Brigade commenced its advance from Jamalpur on the morning of December 12. Its leading battalion, l MARATHA LIGHT INFANTRY, linked up with 2 PARA at the bridge at 1700 hours. General Nagra reached Tangail on the night of December 12/13. 6 SIKH LIGHT INFANTRY resumed the advance on the morning of December 13. They cleared Kaliakair by 2200 hours. As per the map there were two routes to Dacca, one via Dhamri – Mirpur – Dacca and the other via Chandana – Tungi – Dacca. 6 SIKH LIGHT INFANTRY was ordered to continue its advance towards Chandana. Safipur was not held. The battalion advanced throughout the night and contacted enemy defences on the Turag on the morning of December 14. Here, the enemy had tanks and the advance was held up. An engineer reconnaissance party was sent to reconnoiter the bridge on Dhaleshwar. It brought welcome news that there was a tarmac road from Kaliakair via Dhamri to Mirpur Bridge on the outskirts of Dacca. The patrol also came upon the commander of the Pakistani 93 Brigade and nine other officers in a clump of trees. They had taken three days to reach the place. Hungry and exhausted, they quietly surrendered to the patrol.

By December 14, General Niazi’s senior staff officers and the Governor’s senior advisors had lost their will to fight. Another urgent message had been sent to the Pakistani President to arrange a ceasefire. There was no reply till December 14. That day a high level meeting was scheduled to be held at the Governor’s house to discuss options.

General Nagra now divided his force. He sent 167 Brigade to reinforce 95 Brigade on the Turag opposite Chandana. He sent FJ Force along the newly discovered route along with 2 PARA, 13 GUARDS and a mountain battery. 2 PARA took up the advance. They reached the vicinity of Mirpur Bridge by 2200 hours on December 15. A patrol trying to cross the bridge was fired upon.

Some troops of 4 Corps had also managed to cross the Meghna River and were poised to advance on Dacca from the east. The first elements of 57 Division had been heli-lifted to Narsingdi by December 10. Its 73 and 301 Brigades were building up across the Meghna using helicopters and river craft. Due to shortage of both, the buildup was slow. However, the buildup was completed by December 14. The advance commenced on 14th. The first artillery shell landed in Dacca on December 14. Further south 301 Brigade had concentrated at Daudkhandi. The ferrying of the Brigade across the Meghna by helicopter and river craft to Baidya Bazar was immediately commenced. The advance from Baidya Bazar to Dacca was commenced on December 15. 14 JAT attempted to clear the built up area at Narayanganj and suffered heavy casualties. However 1/11 GORKHA RIFLES was able to cross the Lakya River on the morning of December 16.

By December 14, General Niazi’s senior staff officers and the Governor’s senior advisors had lost their will to fight. Another urgent message had been sent to the Pakistani President to arrange a ceasefire. There was no reply till December 14. That day a high level meeting was scheduled to be held at the Governor’s house to discuss options. The Governor himself was to preside. A radio intercept alerted the Indian Government about the meeting. The Governor’s house was bombed by the Indian Air Force while the meeting was going on. The roof of the main hall collapsed. A terrified Governor rushed to the air raid shelter and wrote out his resignation. Soon after, the Governor, his cabinet and senior government’ servants moved to a neutral zone created by the International Red Cross at Hotel Intercontinental. General Niazi also received a message from General Yahya Khan to end the hostilities.

However, his request to the US Consulate General to negotiate a cease-fire with India was turned down. The Consul General agreed to forward the request, which reached New Delhi via Washington. General Manekshaw was himself willing to end the war. He had been making repeated calls to the Pakistani forces in East Pakistan to surrender. His reply to Niazi was firm. Cease-fire was possible only if the Pakistani forces in Bangladesh surrendered to the advancing Indian forces by 0900 hours December 16. The time was changed to 1500 hours December 16 at Niazi’s request. At midnight December 15, General Niazi’s Headquarters sent out a signal to all troops under his command to surrender. General Nagra drove to General Niazi’s Headquarters at Dacca at 1100 hours December 16. He was followed by 2 PARA and other units of 95 Brigade. The Indian troops were given a great welcome by jubilant crowds and shouts of Joi Bangla and Indira Gandhi Ki Jai rent the air. The surrender ceremony took place in the afternoon. A guard of honour was provided by 2 PARA and a Pakistani detachment. After he had signed the surrender document, General Niazi handed over his revolver to General Aurora GOC in C, Eastern Command. A total of 91,000 prisoners including 56,694 of the armed forces surrendered to the Indian forces. Indian casualties in the campaign totalled 1525 killed and 4061 wounded.

The Pakistanis completely misread the intentions and capabilities of the Indian Army. They believed that the Indians would be content with annexing a part of Bangladesh and never considered the possibility of their heading for Dacca.

There was no battle for the capture of Dacca. Unlike Berlin, or Stalingrad or even Rangoon, isolated from its fighting formations, defended by a motley demoralised garrison, it fell without a fight. The fall of Dacca was a remarkable victory. In a matter of 14 days, seven Indian infantry/mountain divisions with limited armour had routed an enemy force of three and a half division and advanced over 400 kms in riverine terrain, crossed some of the widest rivers ever crossed during war, and captured the state capital. It was perhaps the only instance where a nation had won a war without winning a single major battle. At the time of surrender, Magura, Faridkot, Khulna, Sylhet, Bramhanbaria, Maynamati were all holding out. Most of the Pakistani divisions and brigades were largely intact. How was it possible? There are many reasons and some of these are discussed in the subsequent paragraphs.

The Pakistanis completely misread the intentions and capabilities of the Indian Army. They believed that the Indians would be content with annexing a part of Bangladesh and never considered the possibility of their heading for Dacca. They thus opted for a forward posture without developing a viable plan for the defence of Dacca. The presence of even one infantry brigade at Dacca as reserve would have made its capture difficult and time consuming. Underestimating enemy intentions and capabilities can have disastrous results. Napoleon and Hitler underestimated Russia with disastrous results. We paid the price for a similar folly against the Chinese in 1962. Pakistan paid the price in 1971.

India achieved air superiority over East Pakistan within the first few days of battle. Though the air effort available over East Pakistan was limited, it was enough to carry out effective interdiction to demoralise the enemy’s forces and give a decisive edge to the Indian forces.

Adequate preparations and resources are essential for battle. General Manekshaw was able to resist political pressure and ensure adequate preparation before starting the offensive. Thus he won a remarkable victory with minimum casualties in minimum time. Unfortunately the same was not the case either in 1962 or in the battle for Jaffna in Sri Lanka in 1987. The results in both cases were disastrous.

Support of the local population also proved invaluable. The information provided by them about the terrain and enemy dispositions was very useful and enabled the Indian forces to bypass well prepared positions. Locals willingly provided and operated locally available transport like bullock carts, cycle rickshaws and various types of river craft and thus enabled the Indian troops to cross the numerous river obstacles, often unopposed. This kind of support is only available to a liberation army.

Last, but not the least, the Indian Army, by and large, maintained the ultimate aim of heading for capture of Dacca. Despite aberrations like 4 Mountain Division’s involvement at Kushtia and 9 Infantry Division’s pursuit of Pakistani 107 Brigade to Khulna, other formations bypassed enemy strongpoint’s and headed for Dacca. Thus the war was won without winning most of the battles.