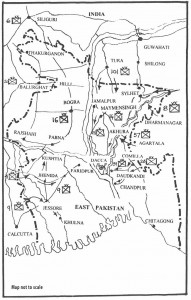 Background to the Battle

Dacca the Capital of East Pakistan was a natural fortress well away from the borders with India. On the west it was protected by the formidable Jamuna, which after its confluence with Padma was a very formidable water obstacle indeed. On the east was the formidable Meghna. The northern approaches were guarded by the Bramhaputra, a distributary of the Jamuna and Turag, another distributary of the mighty Jamuna, which also provided depth from the West. The Balu and the Lakaya rivers provided depth to Meghna in the east. The shortest approaches were from the west via Calcutta – Bongaon -Jhenida – Faridpur – Goalondo Ghat and from the east from Agartala. Pakistan’s 9 Infantry Division was responsible for defending the western approach. It had two regular and one adhoc brigade.

The regular brigades, 57 and 107 Infantry Brigades were deployed in the Meherpur – Jhenida Axis and Bayra – Jessore Axis. Two infantry divisions guarded the eastern approaches. 14 Infantry Division in the north had two regular and one adhoc brigade. 202 Adhoc Brigade was located at Sylhet. 313 Infantry Brigade was located at Maulavi Bazar. The third, 27 Infantry Brigade, was located at Akhaura opposite Agartala. 39 Adhoc Division was responsible for the defence of the southern sector extending from Comilla – Laksham – Chandpur – Daudkhandi. This division had three brigades. Pakistan’s 16 Infantry Division held the area west of Jamuna and north of the Padma called the Northern Area with headquarters at Bogra. This division had three regular brigades, one adhoc brigade and four squadrons of armour. Though this area was not on the approach to Dacca, it had the maximum forces as it was appreciated by Pakistan that this was the area India would like to capture for setting up the Government of Bangladesh and resettling the refugees.

For the capture of East Pakistan, India had assembled a force of three Corps and the 101 Communication Zone, totalling a force of about seven divisions and the 50 Para Brigade. 2 Corps having 9 Infantry Division and 4 Mountain Division were employed on the western approach for capture of Jessore and Faridpur.

The northern approach to Dacca through Meghalaya – Jamalpur – Mymensingh – Dacca was not given much importance. Pakistan’s 93 Infantry Brigade initially guarded this approach with two regular battalions. The Pakistan army headquarters did not consider that India’s war aims included capture of Dacca. They were confident that India would be happy with capturing enough territory to set up a Bangladesh Government and to resettle the refugees. They were also confident that they would be able to hold the Indian Army long enough to enable the international community, including United States to pressurise India into accepting a cease-fire. Pakistani forces were thus deployed on a forward posture and Dacca, as was to be expected, was only held by a garrison battalion and some services units.

For the capture of East Pakistan, India had assembled a force of three Corps and the 101 Communication Zone, totalling a force of about seven divisions and the 50 Para Brigade. 2 Corps having 9 Infantry Division and 4 Mountain Division were employed on the western approach for capture of Jessore and Faridpur. 33 Corps with 20 and 6 Mountain Divisions were given the task of capturing the Northern Sector. 4 Corps with 8, 23 and 57 Mountain Divisions and 50 Para Brigade were deployed to advance on Dacca from the east. 101 Communication Zone under Major General Gill had only one regular brigade, the 95 Mountain Brigade and FJ Force of mainly Mukti Bahini battalions under Brigadier Sant Singh, MVC and had been given the task of capturing Jamalpur and Mymensingh.

The battle for East Pakistan did not go as per the Pakistani plan of battle. The Indian forces, brilliantly adopting the strategy of indirect approach, launched attacks from unexpected directions; bypassed, turned or isolated well-prepared defences, and made unexpectedly rapid progress. In the west, 4 Mountain Division bypassed the defences at Meherpur and captured Jhenida by December 6.9 Infantry Division captured Jessore on December 7. They reached the banks of the Madhumati by December 9. 57 and 107 Pakistani brigades were unable to fall back towards Dacca. Though Magaura and Faridpur continued to remain in enemy hands till the surrender on December 16, none of its troops were able to fall back for the defence of Dacca.

In the east, Akhaura fell to 57 Mountain Division on December 5, cutting off two brigades of Pakistan’s 14 Infantry Division at Sylhet. Bramhanbaria fell on the night of December 7/8. Bhairab Bazar was isolated and Narsingdi was secured by heli-lifting two infantry battalions by December 10. 311 Brigade was air-lifted to Narsingdi while 73 Brigade used river craft for crossing the Meghna. The buildup of these two brigades was completed by December 14 and the first artillery shell landed at Dacca the same day. Further south, 23 Infantry Division bypassed the defences at Laksham, Maynamati and Comilla bottling up two Pakistani brigades at Maynamati. The river ports of Daudkhandi and Chandpur were captured on December 9. 301 Brigade was air-lifted to secure Baidya Bazar on December 15 and moved towards Dacca. Thus none of the troops deployed in the east were able to fall back for the defence of Dacca.

In the 101 Communication Zone sector 95 Mountain Brigade was launched on the Kamalpur – Jamalpur axis and FJ Force on the Haluaghat – Mymensingh route. Kamalpur ‘was held by troops of a battalion of the Baluch Regiment. The garrison had repelled repeated attempts to capture it in November. It was surrounded by December 4 and subjected to repeated air strikes. The garrison was then advised to surrender but refused. The garrison commander asked for reinforcements. When none came, the garrison withdrew on the evening of December 4. Pakistan had another delaying position at Bakshiganj. But this garrison also withdrew without a fight. On December 5, Major General Gill, GOC 101 Communication Zone, went forward towards Bakshiganj with the 95 Brigade Commander in a jeep.

Unfortunately, the jeep struck a mine. General Gill was wounded and evacuated. Major General G C Nagra, GOC 2 Mountain Division along with his staff now took over the operations. The next objective on the axis was Jamalpur. General Nagra planned to take Jamalpur with an outflanking move from the west. Two battalions, 1 MARATHA LIGHT INFANTRY and 13 GUARDS, crossed the river 8 kms west of Jamalpur and moving in bullock carts, established blocks to the south of Jamalpur on December 9. The infantry available was considered to be inadequate for the capture of Jamalpur. 167 Mountain Brigade was made available and 6 SIKH LIGHT INFANTRY from this brigade joined the other two battalions south of Jamalpur on December 10. 95 Brigade now prepared for the attack on Jamalpur.

General Niazi had relied on troops falling back for the defence of Dacca. By December 10 he was in a panic. Indian 4 Corps troops had landed at Narsingdi and were getting ready to move on to Dacca. But none of his brigades had managed to fall back. Dacca was defenceless.

General Niazi had relied on troops falling back for the defence of Dacca. By December 10 he was in a panic. Indian 4 Corps troops had landed at Narsingdi and were getting ready to move on to Dacca. But none of his brigades had managed to fall back. Dacca was defenceless. He therefore ordered 93 Brigade at Mymensingh and Jamalpur to immediately withdraw to Kaliakir. The brigade commander reluctantly ordered his battalions to withdraw. The Mymensingh garrison was able to withdraw unmolested. However, the Jamalpur garrison had to make a fighting breakout on the night of December 10/11. This was largely unsuccessful and 380 prisoners were rounded up on the morning of December 11. FJ Force had by this time advanced to Mymensingh against light opposition and took the town unopposed on December 11. The path for the final push to Dacca was now open.

According to the original plan of General Niazi, Dacca was to have a double line of defences based on the Turag and Lakya Rivers. The defences were to be manned by the troops falling back from the various sectors. However, none had arrived. The withdrawal of 93 Brigade had been ordered too late. So whatever was available was mustered. There were about 1500 regular troops including service personnel available. In addition about 3500 police and paramilitary personnel were available. These were formed into groups and deployed. To support the troops were a few mortars, recoilless guns and a squadron of tanks. The morale was low. General Niazi had approached General Yahya Khan through the governor, Dr Malik on December 7 to arrange an early cease-fire. The Pakistani President authorised the Governor to do what he could. The Governor got in touch with Paul Mark Henry, Assistant Secretary General, the United Nations, who happened to be in Dacca and requested him to arrange a cease-fire. The request reached New York and received large publicity. As a result Pakistani Government disowned the request. Efforts were made to lift the spirits by talking of Chinese intervention and the move of the US Seventh Fleet. Both had very little effect.

The Indian Army now sensed the opportunity for the kill. 50 Para Brigade was removed from 4 Corps and allotted to 2 Mountain Division. In view of the approaching US Seventh Fleet, the tempo of operations were quickened. The troops available for the capture of Dacca were as under:

On the eastern approach under 57 Mountain Division:

The Indian Army decided to drop 2 PARA Group north of Tangail, on the night of December 11 to capture and hold the bridge on Turag River and stop enemy reinforcements from falling back on Dacca. Unknown to them, Headquarters and some elements of 93 Brigade had already fallen back on Tangail. The commander of the Pakistani brigade actually witnessed the para drop from the Circuit House at Tangail.

The timing of the para drop had been preponed to 1600 hours on December 11 on request from the Air Force. A strong wind had developed over Tangail. This dispersed the drop. Some equipment landed in ponds. One Dakota discharged its load 17 kms away from the dropping zone. Despite these difficulties, 2 PARA group concentrated early enough. The local population was very helpful. They helped in retrieving and carrying the loads. The Pakistani brigade commander ordered one of his companies to deal with the paratroopers. The company commander came back after half an hour and reported that the Chinese had landed. The locals had told him this. As the troops had been told that China and US were expected to come to their aid, he had believed the story. The thought that the Chinese had landed cheered up the group for a while. But the Commander soon realised that it could not be true. He had two options, to engage the paratroopers or proceed to Kaliakair as ordered. He chose the latter option. Unfortunately for him, one of the vehicles of his column was blown up a few kilometres south of Tangail on a mine laid by the Mukti Bahini. Some shots were also fired. The brigade commander panicked thinking the Indians had put up a roadblock. He and the troops accompanying him abandoned their vehicles, split into small groups and set out on foot for Kaliakair.