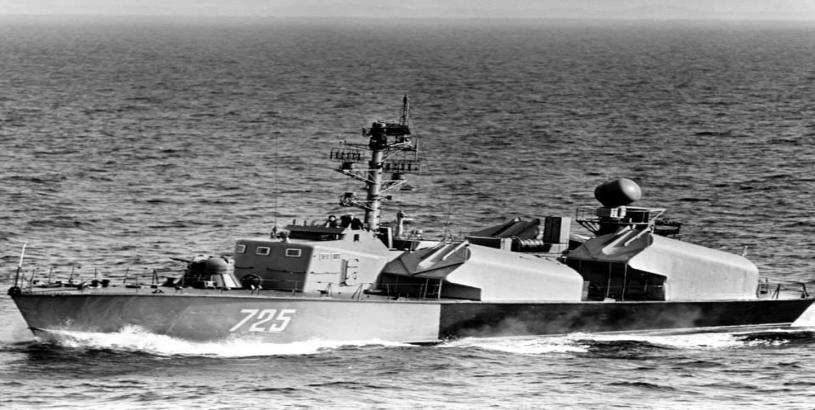 Missile boat of the Killer Squadron

President Ram Nath Kovind awarded the President’s Standard to the 22nd Missile Vessel Squadron, also known as the Killer Squadron of the Indian Navy, at an impressive ceremonial parade at Naval Dockyard, Mumbai, on December 8.  A special day cover and a commemorative stamp were released on the occasion. 2021 marks the 50th anniversary of the 1971 war victory leading to the liberation of Bangladesh.

It is also the 50th year of the Killer Squadron, which remains at the forefront of India’s seaward defence on the Western seaboard. Based in Mumbai, the 22nd Missile Vessel Squadron comprises missile vessels Prabal, Pralaya, Nashak, Nishank, Vipul, Vibhuti, Vinash and Vidyut.

The Killer Squadron traces its genesis to the 1971 war when Osa I class missile boats, newly inducted into the Indian Navy from the erstwhile USSR, took part in Operations Trident and Python that were decisive in enabling the Indian Navy to dominate the Arabian Sea. The attacks on Pakistan naval units and Karachi harbour during the two operations effectively nullified the Pakistan Navy’s war-waging potential and earned these missile vessels the sobriquet ‘Killers’.

The 22nd Missile Vessel Squadron was formally established at Mumbai in October 1991 with 10 Veer Class and three Prabal Class missile boats. However, the genesis of ‘Killers’ dates back to 1969 with the induction of OSA I Class missile boats from the USSR to bolster the Navy’s strength. These missile boats were transported to India on heavy-lift merchant ships and commissioned in early 1971 at Kolkata. They were baptized by fire during the India-Pakistan war of 1971 where they played a decisive role.

Given India’s vital geo-strategic location in the Indian Ocean region and the threat from two adversarial neighbours, it is amazing as to how since Independence the politico-bureaucratic establishment remained ‘sea-blind’ till India’s fourth war in 1971 and the third against Pakistan. When then Naval Chief, Admiral S.M. Nanda, popularly known as Charles, got the green signal from Prime Minister Indira Gandhi for the Navy to participate in the 1971 war, he was raring to go.

At a press conference in Jamnagar in November 1971, Admiral Nanda reportedly said: “….if war comes again, I assure you that we shall carry it right into the enemy’s biggest ports like Karachi. I know this harbour quite well for I started working there. And you have my word that … the Indian Navy will make the world’s biggest bonfire of it.”

That was a promise which he proved true.

In an interview he gave at the age of 91 to Rediff.com, he stated: “On the evening of December 4, we towed these boats out half the way, they dropped their tow lines and raced towards Karachi. We hit Karachi, sank two warships and damaged a third. We did this again on December 8 and sank two more ships. One or two missiles hit the oil tanks near the harbour, which set the entire complex ablaze. Karachi burned for seven days.”

Operation Trident was the first missile attack on Karachi harbour, on the night of December 4/5, 1971, by Naval Ships Kiltan, Katchall, Nipat, Nirghat and Veer. In its maiden missile-boat operation, the Indian Navy destroyed and sank PNS Khyber (a Pakistani destroyer), PNS Muhafiz (a coastal minesweeper) and merchant vessel MV-Venus Challenger. This operation was a watershed in ingenuity and strategic thinking as the Indian Navy used bigger ships to tow these smaller missile boats close to the Pakistani ports – something unthinkable even by those who had built these boats.

This was a deathly blow to the aspirations of the Pakistan Navy and crippled it for years to come. Operation Trident is considered to be one of the most successful operations in modern naval history, with no casualties sustained by the Indian forces.

In Operation Python, the Indian Navy relentlessly launched another daring attack on the night of December 8/9 when INS Vinash, along with two frigates, fired four Styx missiles, sinking the Pakistan Naval Fleet Tanker, PNS Dacca, and caused substantial damage to Keamari Oil Storage Facility at Karachi. Again, there were no damages to the Indian forces. The squadron was given the title ‘Killers’ and the Indian Navy instituted December 4 as Navy Day.

Over the past five decades, the Killers have maintained the capability of delivering a credible offensive punch from the sea. Being the tip of the Sword Arm of the Indian Navy, the battle-ready Missile Vessel Squadron participated in Op Vijay, Op Parakram and most recently during the heightened security state following the Pulwama attack deployed within striking distance of Pakistan’s coast. The squadron prides itself with distinguished battle honours including one Maha Vir Chakra, seven Vir Chakras and eight Nausena Medals (Gallantry).

These lethal ships capable of high speeds and stealthy strikes, fitted with state-of-the-art weapons and sensors, manned by the youngest and most motivated crew the 22nd Missile Vessel Squadron, are the Navy’s assurance to the nation against any misadventure by our adversaries.

The President’s Standard awarded to this fearless formation is a well-deserved tribute to the men who, over the years have rendered invaluable service to the nation.