Birganj and Battle of Kantanagar Bridge 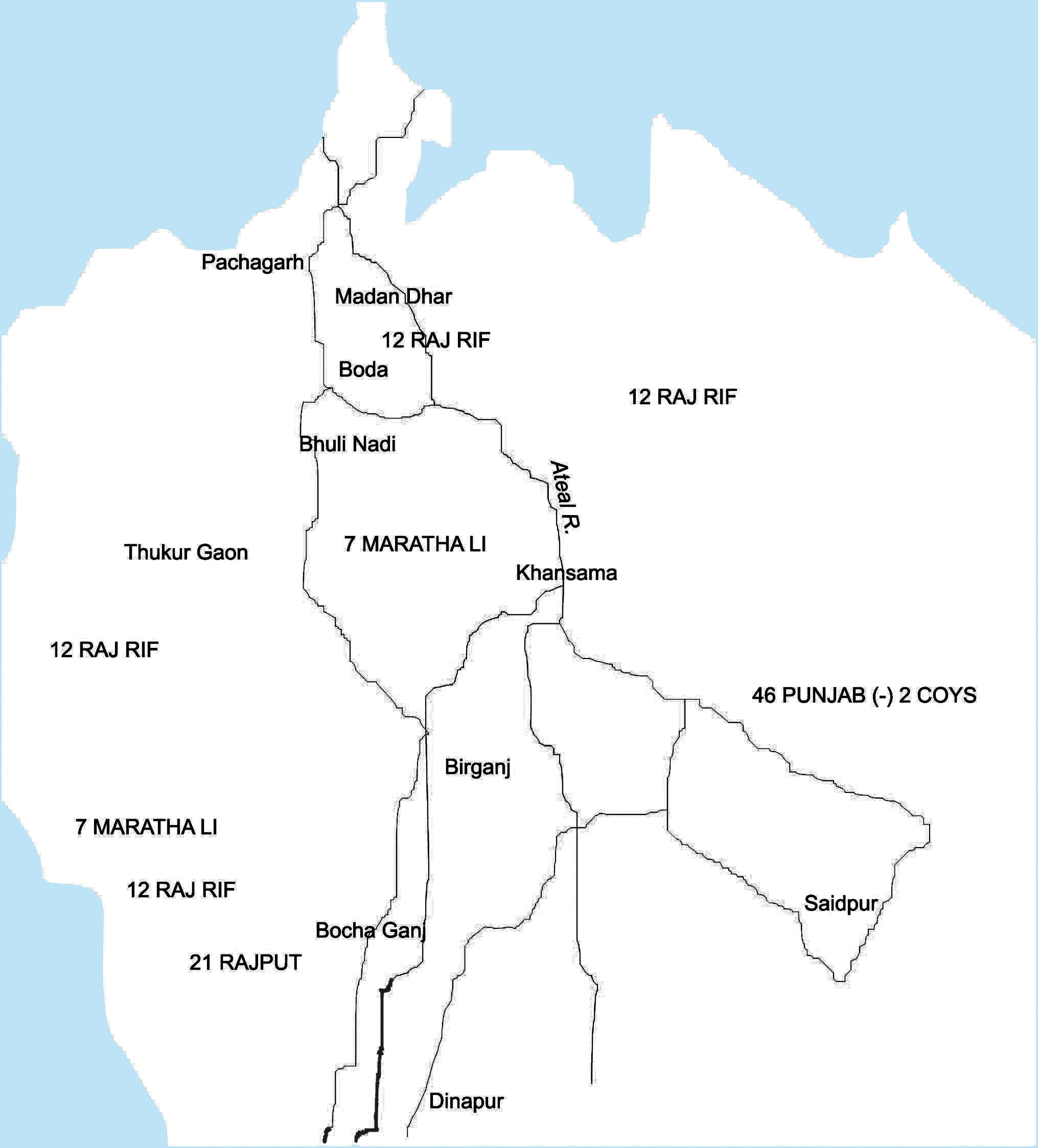 Birganj was the next objective enroute to Kantanagar. This was at the junction of four road axes and thereby controlled all Southward movement towards Kantanagar Bridge. It was, therefore, imperative for 7 Maratha LI to clear this town at the earliest. Contact with the enemy was established by leading elements of ‘B’ company at 1600 hours. The battalion moved ‘A’ and ‘D’ Companies, to carry out an encirclement. Seeing this quick and bold move with determined action, the enemy withdrew hastily in the fading light. Birganj was thus cleared by 1700 hours on 5 December and advance resumed to Kantanagar bridge, whose capture was expected to be a tough nut to crack because, the enemy, withdrawing under our relentless pressure, had been able to occupy previously constructed defences there.

By about 1100 hours, a few bunkers had been captured, but both the companies had suffered heavy casualties. The enemy reacted quickly and, besides a counter-attack, brought down very heavy volume of observed artillery, mortar and automatic fire.

The Marathas, for their advance to Kantanagar, evolved a plan which entailed the “Battalion less one company” to advance along the axis, and the remaining company with a squadron less two troops of armour to advance further West, across country with a view to conducting an encounter crossing the river nearly 3 km North of Kantanagar Bridge and securing a bridge-head for the remainder of the Brigade.

Advance thus commenced from Birganj at 0800 hours on 6 December. About 3 km short of the objective, the advancing company saw some bricks placed on the road in a uniform pattern. A closer examination revealed that they had been placed there to mark the outer edge of a mine field. Battalion’s Pioneer Platoon went into action and lifted 76 mines in two hours, during daylight under enemy shelling, after which the advance was resumed. 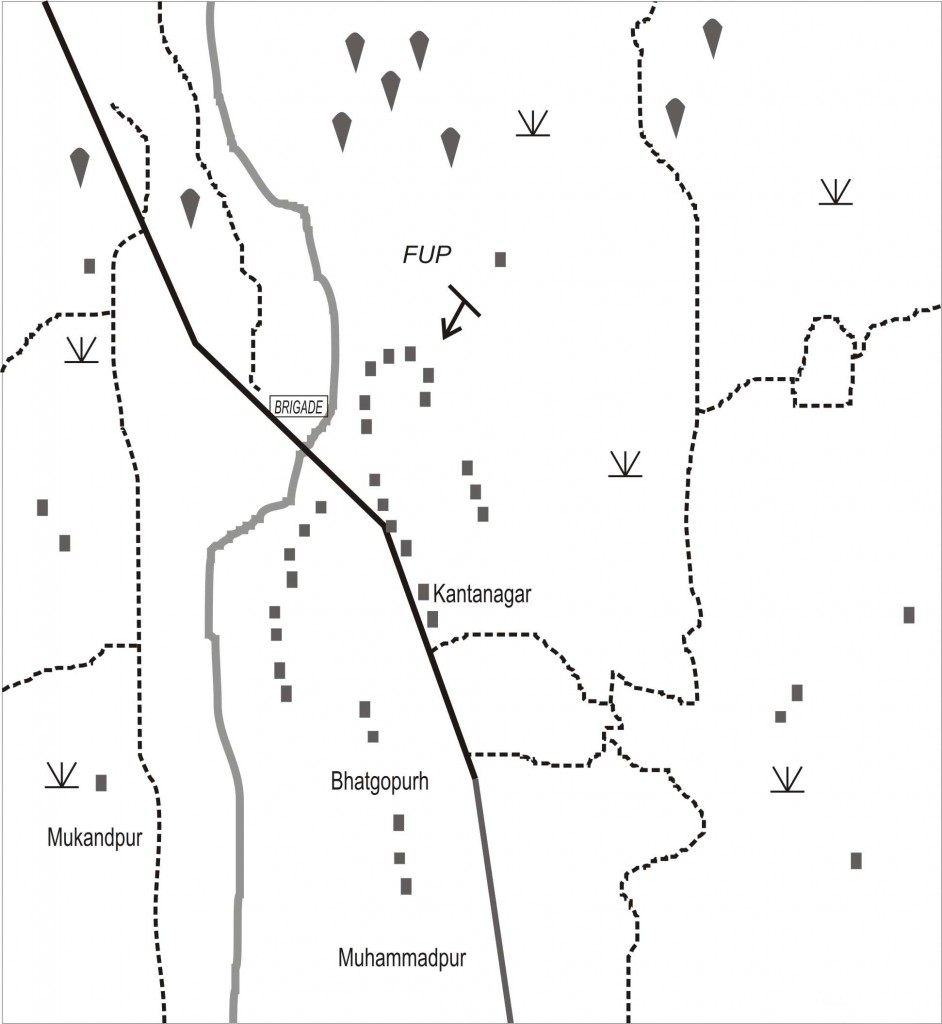 Around midday, ‘C’ Company of the unit contacted enemy defences across the river with the bridge having been completely destroyed. The company suffered some casualties and any move forward drew heavy and accurate fire. They, therefore, firmed in and started the process of gaining more information.

From information available with ‘A’ and ‘C’ Companies, it was appreciated that the enemy opposing the Battalion consisted of the battered remains of 34 Punjab, reinforced by a large number of Razakars. A plan for attack was then made, fire plan was initiated at the appointed time and the Battalion formed up amidst enemy fire. ‘A’ and ‘D’ Companies were given the task to attack, while ‘B’ Company was kept in reserve.

Finally, at 1530 hours on 10 December, the column returned with the information that 26 Frontier Force was holding the town and a troop of tanks was also in location…

At 0900 hours on 7 December, the assault commenced. By about 1100 hours, a few bunkers had been captured, but both the companies had suffered heavy casualties. The enemy reacted quickly and, besides a counter-attack, brought down very heavy volume of observed artillery, mortar and automatic fire.

The Marathas had crossed the Dhap River from an area North of the bridge during the night of 6/7 December but two subsequent attempts to clear the far bank proved abortive. In spite of persistent efforts by the unit and a number of air strikes on the enemy position success eluded the Marathas. In order to intercept enemy movement and capture prisoners, road blocks were established between Mile 10 and Dinajpur on nights 7/8 and 9/10 December. 12 Raj Rif also carried out a successful long range raid on Dinajpur during night 9/10 December to confirm whether this town was still occupied or not. The force for this raid consisted of two companies and was commanded by Major (Maj) Naresh Chander. Artillery support was provided by a troop of 5.5 inch medium guns. 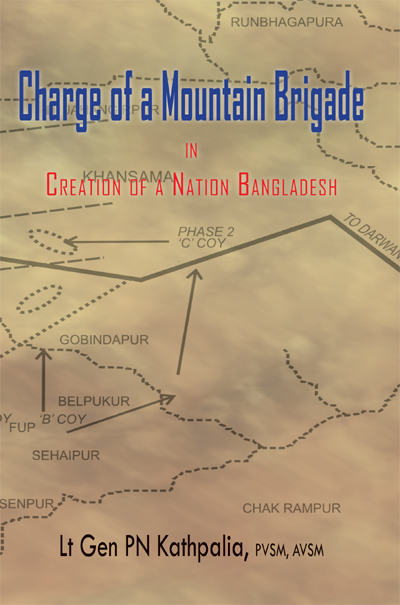 The main problem arising during this raid was the absence of long range, reliable and portable radio sets on which information could be passed to the Brigade HQ. In spite of providing Radio Set CU734 meant for air support communication to this column, it failed to function satisfactorily during the crucial stages. An agonising wait for the completion of the mission thus ensued.

Finally, at 1530 hours on 10 December, the column returned with the information that 26 Frontier Force was holding the town and a troop of tanks was also in location. The raid party however brought back a number of Pak prisoners and weapons, thus setting up the morale boosting stage for a change in plans to break the impasse and capture the Kantanagar bridge.

is author of  book "Charge of a Mountain Brigade in Creation of a Nation Bangladesh".

One thought on “Birganj and Battle of Kantanagar Bridge”