Army Aviation: A dream to realise 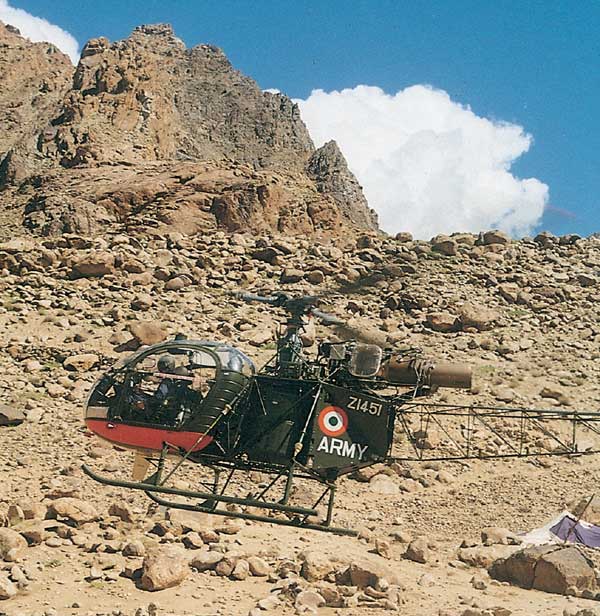 Helicopters have tremendous usage, both in times of peace as well as war. Also, they can be used across a wide spectrum of conflict from low-scale counter-insurgency operations to full-fledged highly intense warfare. Initially, helicopters were used in the Korean War (1950-1953). The Vietnam War (1965-1973) saw the maximum use of helicopters in all roles. On a battlefield which is becoming increasingly lethal, this would demand utmost professionalism in acquisition of support measures which enhance survivability, of devising tactics and strategy which will enhance mission accomplishment, and of avoiding pitfalls which detract from the above.

The US Army Air Force (USAAF), the only air arm of the US, began as part of the US Army and continued so till 1947. Then the USAF became an independent service. What one needs to remember is that even when the USAF was integral to the USAAF, It was manned by highly air minded professionals. During World War II the Chief of the US Army, General George C Marshall allowed the USAAF to function in the most independent manner largely governed by the rules of air warfare. The defeat of the allies at Kasserine Pass at the hands of Rommel was more a result of divided air assets under different army commanders due to administrative convenience. However, such short cuts overriding the fundamental of centralised control were never repeated by the Americans. The result was that US troops never had to fight under the threat of opposing air force since 1943 to the present day.

The US involvement in Vietnam beginning in early 1960s coincided with the Golden Age of the US economy. The now well-matured helicopter machine was the most welcome transportation in the tropical rain forests where the deadly booby traps of Vietcong were exacting rather heavy casualties on unsuspecting GIs. Helicopters were welcome in increasingly new roles and numbers. The US economy was robust enough to support this requirement. Many new roles for the helicopters evolved. The ground commanders tried helicopter integration by way of air regiments mounted on helicopters. But the attrition to helicopters was by no means small. Yet the US economy could sustain these losses. When the MANPADS arrived on the scene in 1972, it seriously curtailed helicopter usage in the affected areas.

Since the days of the Vietnam War, helicopters have been used in many places – in wars, in skirmishes and in many other roles. While the employment of some has been highly successful, there have been instances of its misuse leading to mission failures. We need to study both types of employment to derive proper lessons for the future. This will guide us properly in selecting the correct roles and tasks, the correct helicopters, the employment philosophy and the correct culture for helicopter professionals. How armies, air forces and navies need to equip themselves with helicopters will also become self evident. An analytical study of helicopter employment in war like situations follows.

Ground forces were over-reliant on helicopters, even with the peculiarities of the terrain and communication difficulties…

Helicopters have tremendous usage, both in times of peace and war. Also, these machines can be employed across a wide spectrum of conflict from low-scale counter-insurgency operations to full-fledged highly intense warfare. Initially, helicopters were used in the Korean War (1950-1953). The Vietnam War (1965-1973) saw the maximum use of helicopters in all roles. On a battlefield which is becoming increasingly lethal, this would demand utmost professionalism in acquisition of support measures which enhance survivability, of devising tactics and strategy which will enhance mission accomplishment, and of avoiding pitfalls which detract from the above. For this, we need to study the threats faced by helicopters in relation to small arms fire, light ADA, heavy ADA, MANPADS, SAMs and hostile fighters, and consider each element relating to its kill zones. We need to relate the possible additional support equipment which enhances helicopter survivability in relation to above threats, the possible tactics and strategies which can minimise the above threats. Due to the topographical factors, we need to consider three areas of operations mainly – the valleys and hills in the Northern areas, the plains of Punjab, the desert and semi – desert areas and the tropical jungles.

Helicopter deployment in South Vietnam commenced with 1,483 helicopters in 1965 reaching a figure of over 3,636 in 1969. The year-wise deployment was as follows:

Helicopters were deployed with the ground forces under the direct command and control of ground force commanders. There were two specialist divisions equipped with helicopters, the First Air Cavalry Division and 101 Airborne Division, each with about 450 helicopters. The rest were deployed with other units and in other specialist roles. The type of helicopters were CH 6A, UH1-4, UH-1C, AH1-G, CH-47, CH-53, CH-54, CH-58. Used mainly for observation, these were utility helicopters and armed utility helicopters. From 1967 onwards, the Huey Cobra was utilised for armed attacks. They were used in the following roles:

In the sixties, the US was spending nine per cent of its GDP on defence.

For a comprehensive understanding, the average sorties per day are shown below:-

Take, for example, 1969 as a year for further study. Daily sortie averages are:

3,636 helicopters were deployed in 1969. Therefore, each helicopter would have done 6.36 sorties per day if no un-serviceability, battle losses and other such factors are taken in to account. However, in 1969, 1,048 helicopters were lost averaging 87 helicopters per month. These must have been replaced. The sortie rate seems feasible.

There were 590,000 ground troops in South Vietnam in 1969. Let us consider a division comprising 10,000 troops. That means there were 59 divisions. Thus the sorties work out to 392 sorties per division per day. It seems the ground forces were over-reliant on helicopters, even with the peculiarities of the terrain and communication difficulties.

One of the major battles fought mainly with helicopter support was Lam Son 719 in 1971 (Lam Son is a South Vietnam prefix for all operations). It was the largest combat assault by helicopters in which 1,500 helicopters were used to fly in virtually two divisions worth of infantry and seize the mountain ridges on either side of Route 9, near Khe Sanh, the road to Laos with an objective of cutting off North Vietnam’s supplies to South Vietnam. In fact, Khe Sanh, a quiet mountain village had been occupied by US Marines in 1967 for the same purpose. Then it had a force of 6,000 Marines. It also had an airstrip fit for transport aircraft. In the 1968 Tet Offensive, this force was surrounded by North Vietnam, cutting off the US forces from the rest. The North Vietnam supplies bypassed this place. But the US held on to this place during the 1968 Tet Offensive as a prestige issue and later evacuated all personnel. In the Op Lam Son 719 in 1971, it was this place again which the South Vietnamese and Americans wanted to recapture.

Initially, all went well in the absence of opposition from North Vietnam. The US troops seized the airstrip at Khe Sanh. The engineers were flown in by helicopters for rebuilding the runway. However the first C-130 to land sank in the mud on the runway, hence no more supplies could be flown in by transport aircraft. Helicopters, therefore, were used to fly in the required stores. It took 14 days for the job, a delay which enabled the North Vietnamese to pull off the battlefield to regroup and eventually chase the South Vietnamese back. This muddle was in no small way responsible for the failure of overall plan. Except for para-drop of 504 Para Regiment in early stages, no further such attempt was made. There seemed to be overuse/over-dependence on helicopters.

Where the Lam Son battle really started to go wrong in the air was the establishment and re-supply of fire bases by helicopters. The fire bases had worked earlier in the absence of any meaningful artillery from North Vietnam, but now they had 130mm artillery, superior in range. In Laos, small positions were soon surrounded and isolated. When the time came to evacuate because the defence perimeter shrunk, the question was who evacuates and who stays? Also, to add to the woes, the weather turned unfavourable.

The overall helicopter losses in Vietnam and the attrition rate suggest a misleading conclusion mainly for two reasons. The way of counting sorties as already explained. And barring a small percentage of helicopter operations, the rest were in a relatively less lethal air defence environment, the maximum opposition being from small arms, Light Machine Guns and 12.7 LMG deployed sparsely. The losses at Lam Son represent a more actual picture and even here, there were no SAMs.