The launching of the Arihant by the Prime Minister (PM) on 26th July 2009 has hopefully, at last, partially lifted the top security veil over the Advance Technology Vessel (ATV) Project. In that light, to the extent feasible, without impinging on any national security concerns, an attempt is being made here, to fill the void and provide some answers to the reader’s genuine concerns.

In the western world, Admiral Rickover’s name is synonymous with the  nuclear submarine. He was an engineer in the United State’s (US) Navy and is globally considered to be the father of the nuclear submarine arm. He was a one man team to see through the US nuclear submarine project from concept design to construction and delivery. To achieve that end, he had to battle all his way through the Senate, the Navy and the Industry. He used his considerable technological/managerial administrative skills and political acumen, to his full advantage. Only then was he able to achieve his ends.1,2 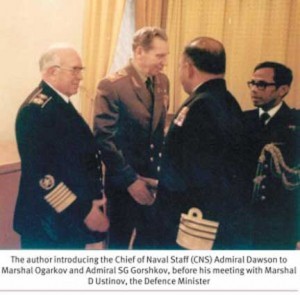 At that stage, it would have been beyond Britain’s (UK) resources to go in for a purely indigenous nuclear submarine. The US was generous enough to lend a hand by transferring a submarine reactor and its linked technology to it. Later, the British Navy (RN) opted for the fitment of US Submarine Launched Ballistic Missiles (SLBM) also. The US was, however, not prepared to do the same for France. France and USSR independently developed their nuclear submarine force. In this area China got considerable assistance from the USSR till the mid 60s. All such assistance ceased after the relationship soured. China continued to work on its own, with limited success. It is only after the breakup of the Soviet Union and the consequential economic collapse that finally brought the Russian Federation (RF) and China together again. Since then, considerable progress has been made and the Chinese Navy [PLAN] can now claim to have two operational class nuclear submarines (Type 093 & 094).

The realization of the need for a nuclear submarine came a little late to India. One would recall the time, when the government was not willing to consider acquiring even a conventional submarine for the purpose of training anti-submarine crews on surface ships. For this purpose, the Navy had to make do with RN submarines during annual Commonwealth exercises. The reason given was that the submarine was an offensive weapon and ours is a defensive navy. Only in the late 1960s a change of mind took place and the first squadron of I641 submarine was inducted into the Navy from the Soviet Union (USSR). After two decades, the HDW submarine from Germany, followed by 877EKM submarines from USSR were also added to the inventory.

The aspirations for a nuclear powered submarine surfaced soon after the Bangladesh war. Presumably, Indira Gandhi, the then Prime Minister, was traumatized by the unexpected entry of the US Aircraft Carrier Task Force into the Bay of Bengal. To counter this move and demonstrate their solidarity with India, Admiral Gorshkov is believed to have ordered one of the Soviet nuclear submarines in the vicinity to surface. This had a salutary effect on the situation. This one single incident demonstrated to the Prime Minister the overbearing significance of a nuclear submarine in the strategic scenario.3

Accordingly, Director of Marine Engineering (DME) at Naval Head Quarters (NHQ) was encouraged to initiate a technical feasibility study for an indigenous nuclear propulsion system (Project 932). DME was only keenly waiting for such an opportunity. Rear Admiral PN Aggarwal who was then a Deputy Director steered the case through the Defence Ministry (MoD). He later headed the Project team at Bombay in collaboration with the Bhabha Atomic Research Centre (BARC) scientists. Vice Admiral Bharat Bhushan followed suite. Later he became the Director General of the Advanced Technology Vessel (DGATV) programme, also.4,5

The realization of the need for a nuclear submarine came a little late to India. One would recall the time, when the government was not willing to consider acquiring even a conventional submarine

The programme concept, as a complete weapon platform, emerged much later. In 1982, the Soviet Chief of General Staff, Marshal of the Soviet Union, NV Ogarkov, is believed to have conveyed to the PM the willingness of USSR to provide assistance to India in the development of a nuclear submarine. At the time, the Navy was not too enthusiastic about it. They had, after decades, just begun the exercise of rebuilding the conventional force levels and could not think of diverting their meager budget resources to support such an exorbitant venture.

The government decided to follow up the offer. A high level technical team was appointed with Dr Raja Rammanna as the leader. Vice Admiral MK Roy, Dr PR Dastidar, Director BARC, Vice Admiral BR Chowdhury, the DME, Admiral VS Shekhawat an experienced submariner, and Mr BS Ramaswamy, the Additional Financial Adviser (Defence) formed the initial core team. The Naval Attaché (USSR) served as the facilitator at Moscow. The acquisition of a nuclear submarine and training of the crew was taken up first. This fructified, finally, in the lease of the INS Chakra.

Some eminent analysts have postulated that such transactions (including the lease of ‘Nirpa’) have been possible because the IAEA jurisdiction does not extend to bilateral agreements involving Nuclear Weapon States transferring technology/hardware/fuel, etc, in respect of nuclear powered warships/submarines to any other party.6,7 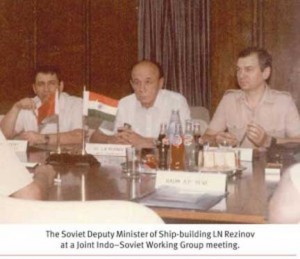 Further, the 1993 Lucerne NSG amendment (incorporated in Parts 1 and 2 of IAEA document INFCIR/254 revision 1) should prevent ala Chakra/Nirpa type transfer by China to Pakistan, with China being formally inducted into the NSG since 10 June 2004. In this context, all Indo-Soviet agreements prior to 03 April ‘92 would fall outside the scope of this amendment. This would include Nirpa as well as the same, presumably, flows out of the parent agreement for Chakra, concluded in the early 1980s.

Seeking of assistance in design, development and construction of an indigenous nuclear powered submarine was taken up next. It was clear, from the very beginning, that to achieve success in such a complex, high technology programme, all technical and industrial resources of the country, in the Public and the Private sector, would need to be harnessed. A special architecture had to be evolved to accomplish a Publicfor-Private Partnership (PPP) that could achieve the cutting edge goals and retained under the highest possible national security umbrella. This gave birth to the ambitious Advanced Technology Vessel Project (ATV), under the Defence Research & Development Organization (DRDO).

The ATV pioneering team under the DRDO was lead by Vice Admiral MK Roy as the Director General. His team of core specialists comprised the following:

Director (PTC): AN Prasad at BARC/Kalpakam.

The apex body for the programme was set up on the lines of the Integrated Guided Missile Programme model. The PM, who was also the Raksha Mantri, was in the chair.

One thought on “Arihant: The Annihilator”