The achievements of its work centre, the Defence Machinery Development Establishment (DMDE) would be an eye opener. It would be well worth the while for the IN to study this model and incorporate the same in its indigenisation programme including establishing a DMDE clone. Other work centres have also performed equally well.

The IN has adequately proved its credentials with regard to its commitment to indigenisation. To effectively and efficiently exploit the indigenous potential further, there is a need for a mindset change within the IN and particularly in the Ministry of Defence (MoD). The entire Higher Defence Management (HDM) organisational structure needs to be re-oriented on a functional basis – similar to the global practice. The recommended organisation structure to fulfil such a requirement with specific reference to the IN is illustrated at Figure-1.12,13 This, in principle, is also in conformity with an objective set in the Kelkar Committee report. It recommended the restructuring of the acquisition wing of the MoD along the lines of Direction Generale de L’armament (DGA) – the French defence procurement organisation. 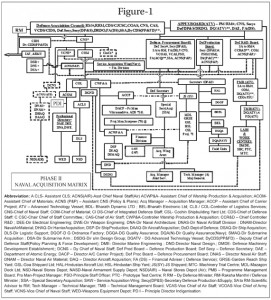 INS Arihant going critical on August 10, 201314 gave further impetus and confidence to the competence level of the ATV model. The model clearly demonstrates how a professional autonomous body, devoid of any conventional bureaucratic baggage, can deliver such a complex object, as a nuclear submarine. The core content of the organisational model would need to be adapted and incorporated in the restructuring process recommended.

At this point of time, a legitimate question being asked is as to where India stands on giving priority to building indigenous submarine design capability. It would seem that we are once again seriously considering going in for a Joint Venture (JV) production agreement for the Project 75I. The need for building up of the submarine force level at an accelerated pace is strategically unquestionable. It is reported that the IN has reconciled itself to living with the situation and manage the interim by modernising the existing boats.15 With the dismal record of HSL in undertaking Medium Repairs (MR) of one 877EKM boat, presumably, all the modernisation of the remaining 877EKM boats would be offloaded to Russia, as hitherto.

Where does India stands on giving priority to building indigenous submarine design capability?

The tragic loss of INS Sindhurakshak is a serious body blow to the IN pushing the submarine ORBAT level below acceptable norms. At the same time, the issue of acquiring indigenous submarine design capability is an equally compelling strategic technological objective and forms part of the approved thirty-year submarine capability building exercise.

In the above circumstances, it is suggested that in the debate leading to the evolution of the strategy for formulating the Request for Proposal (RFP) for Project 75I and finalising the JV Agreement, the following overriding criteria should be seriously considered and conflicting interests duly resolved. Such an opportunity is rare and India must not miss the boat again:

i. Access to design software, linked empirical formulae/design coefficient and a comprehensive catalogue of submarine component data along with global vendor particulars in the NATO Codification System (NCS) format.

ii. Full joint design collaboration with the parent Design Bureau including systems design, design validation at all stages and in all disciplines, model hydro-dynamic/acoustic/shock/vibration testing.

iii. Whether these are achieved under the offsets clause or otherwise, is a matter of detail.

iv. Need for raising the FDI cap under the ToT on cutting edge technology clause.

It is most unlikely that the desired extent of cooperation would be forthcoming from any submarine industrial base enshrined within a capitalist economy. In the case of France, both the Defence Minister and the Ambassador, on separate occasions, have indicated their limitations in agreeing to part with submarine design know-how and know why to India.16,17 The signals from USA are not much different.19

9. John Birker, Industry & Infrastructure for Future s/m: An International Perspective Speech presented at the s/m Institute of Australia’s Biennial Conference in Perth, Nov 2010. www.rand.org/pubs/corporate_pubs/CP622.html. Some of the suggested actions for Australia are already part of India’s ATV Programme.

16. Francois Richier the French Ambassador to India. During an interactive session after his address to the Observer Research Foundation, New Delhi on ‘What Makes the Indo-French Relation Special – Understanding the Dynamics of Strategic Partnership’, 11 Feb 2013.

17. Jean Yves Le Drian – the French Defence Minister at an interactive session after a lecture at the IDSA on Indo-French Partnership: The Choice of Strategic Autonomy, 22 July 2013.

18. Joint Statement at the end of the Indo-US Strategic Dialogue of 24 June 2013 are not encouraging in respect of any possibility of going beyond coproduction. www.security-risks.com/security-trend-south-asia/india-defence/india-us-defence-cooperation:-impetus-instrategic-1979.html