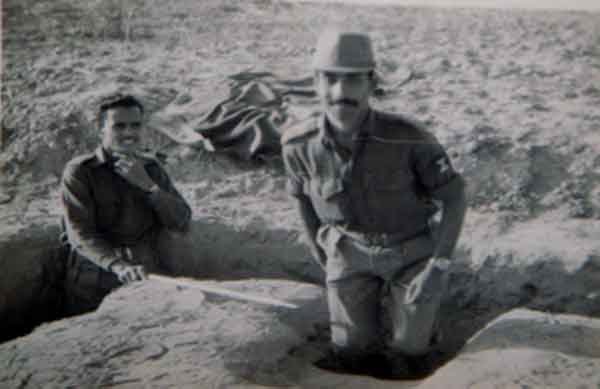 The incidents narrated ahead are based on the experience of 2nd Lieutenant Baljit Singh, 3rd Madras Infantry Battalion, 69th Infantry Brigade, who had participated in the legendary 1965 Indo-Pak war. The contents are a pen picture of the Indian counter offense in the Pakistani Punjab sector, which includes ‘Attack on Maharjke’, ‘Battle of Phillora’ and ‘Siege on Sialkot’.

On 6th September 1965 everyone was prepared for the action which was to be carried out in response to the Pakistani foul play, Operation Gibraltar. The plan of action had been laid out. Troops were being gathered at Sambha, which was the new ‘Harbor Point’, before distributing their area of operation.

In the evening I was informed by my company commander, Captain Oberoi that our first objective is a town named ‘Maharjke’ just few kilometers away from the international border. While he was briefing me, so that I could pass the same to the fighting force of the company, it was learnt that ‘Pakistani Air Observation Post’ (AOP) had become aware of our movement. We realized this at that point of time when the Pakistani Air force bombarded our base camp. Although not much damage could be done by them but it was sufficient indication for us to maintain our ‘Stealth’.

Lieutenant General Harbaksh Singh: “There should be only one thing in the consciousness of every single person whether an officer or soldier that he should have no mercy on these invaders who have invaded our motherland!”

The next morning we packed up our ruck-sacks, inspected our weapons and were once again all set for the last briefing by our senior officials of the battalion. Lieutenant Colonel B.K. Bhattacharya let every single chap know what Lieutenant General Harbaksh Singh, commander of North Western Sector told to each and every division’s commander who was about to give everything it had to safe guard the freedom of Indian citizens. He said that “There should be only one thing in the consciousness of every single person whether an officer or soldier that he should have no mercy on these invaders who have invaded our motherland!” Listening these words added more fuel to the anger which was boiling hard in every person, who was out there and the Pakistani bombardment which had taken place last night, simply multiplied the effect.

Such kind of leadership qualities were one of the prime factors that proved exceptionally effective in India’s favor and turned the tide on Pakistan.

On the night of 7th September, the whole of 69th Infantry Brigade moved closer to the international border for capturing Maharjke. The formation of this brigade was: 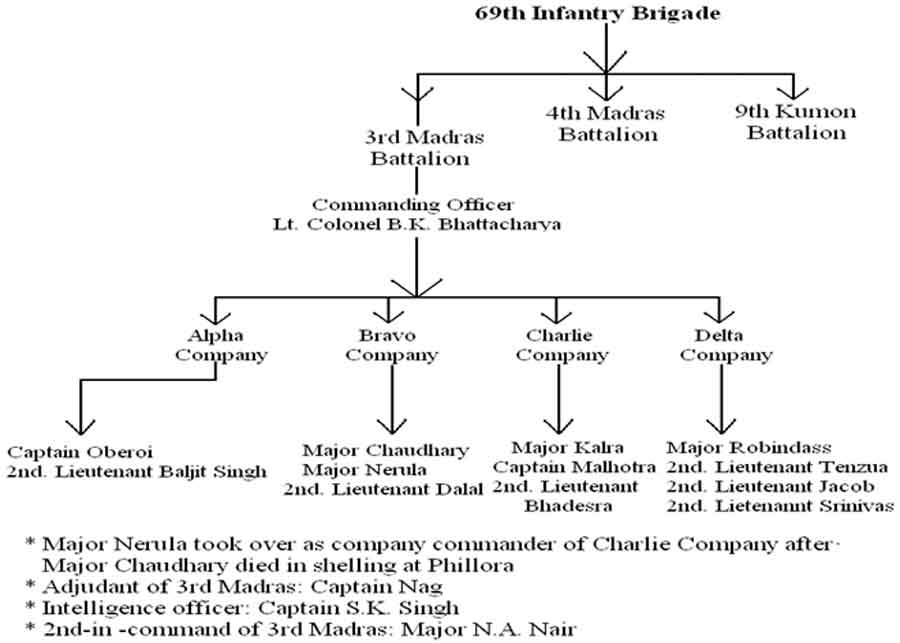 3rd Madras infantry battalion was to encircle the town from right side while the remaining brigade from left. I along with Captain Oberoi was facing the fore front leading Alpha Company along with Bravo Company. At 12 o’clock night we crossed the international border and moved towards Maharjke. Barely had we reached 2 to 3 kilometers inside Pakistan, artillery shelling started and all of us ducked down. Although the topography consisted of farms but the intensity of shelling was very high, we could not move any further for some period of time till our artillery started to give a befitting reply. Pakistanis had the advantage of long range guns, thanks to the American assistance they received, which could fire from a distance of over 20 kilometers, whereas we had the world war-2, 25 Pounder (88mm) guns whose range was somewhat less comparatively.

…these people who are arriving towards us are certainly not Indian troops since we were neither contacted nor informed in advance about any such activity.

Somehow, when the artilleries were engaged we got some time to buckle everyone up and shouting the war cry we moved ahead carrying little for death. But by this time the Pakistanis had spotted our movement from their machine gun posts because of the concentration of artillery fire. This prompted them to fire machine guns on us. We were still a kilometer away from the town but the plain ground was providing little assistance to us in front of the machine gun fire. Ignoring it we kept on motivating our troops to move. A kind of reverse psychology was taking place, the harder we were resisted and the stronger became our resolution to rout the Pakistanis. We literary crawled a distance of 200 yards in the face of enemy fire before we could spot their positions. In between we got the opportunity to crouch and move when the machine guns silenced for a very brief period. We would take the judgment from the flight of ‘tracer rounds’, fired from the guns, in order to remain safe and get closer.

When we reached a distance of 50 to 70 yards away from the machine gun posts, we saw that there were two guns being handled by the Pakistanis, which were firing in the diagonal manner forming an arrow head, anyone who got into the intersection of the guns would die there itself.

It was necessary to clear these machine guns posts in order to get into the town. At this point two kerelite Lance Naiks volunteered for the job of silencing the guns. I must say that those two men turned up at the right time and showed their guts. Slowly, taking the advantage of night and benefit of doubt, leaving the two companies behind, they crawled up to the gun posts and destroyed them by lobbing grenades. It was confirmed that the gun posts have been destroyed after we saw two explosions taking place.

All of us swiftly but cautiously moved closer to the damaged Pakistani first line of defense and after we confirmed that there was no danger of any enemy retaliation, we moved inside the town. Quickly both the companies moved through the town lobbing grenades in the houses and firing bullet shots, so that if there were any enemy soldiers hidden inside could be located and the chances of getting involved in an ambush could be avoided. After we had cleared the town and our remaining brigade had arrived as a back-up, we established defensive positions outside the town, facing towards Pakistan, on the main road that led into Maharjke.

…confirmed that they were Pakistani soldiers dressed in civilian clothes and were trying to disguise themselves in order to escape.

In the early morning hours of 8th September after we had secured the area, I heard noises of people walking from the town and arriving on the road where we were present. Due to unclear visibility because of darkness I could not confirm whether they were our soldiers or of enemy’s. I let Captain Oberoi know about the situation immediately. Thereafter I thought that these people who are arriving towards us are certainly not Indian troops since we were neither contacted nor informed in advance about any such activity. Captain Oberoi was also doubtful about these people since if they happened to be enemy soldiers and came to know about our formation, then they would try to inflict casualties by firing small arms on us or would call for artillery fire on the town, which would prove very devastating.

After a brief period we were able to see them, from their wardrobe we figured out that they were not from the Pakistani militia, since they looked like civilians and were accompanied by women and elderly looking persons. But the moment they reached 50 to 55 meters from us, I noticed that some of the men carried rifles in their hands and while walking with the group, were quite watchful. This confirmed that they were Pakistani soldiers dressed in civilian clothes and were trying to disguise themselves in order to escape. When they reached to an audible distance, I stood up from my position and stopped them. Watching this one of the armed men jumped from the group and tried to take firing position. I fired immediately, looking at his movement and shot him dead. In the mean time both the companies got alerted and encircled the group. 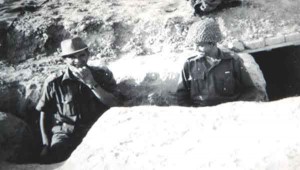 By then sun rise had taken place and we got the opportunity to check out for some more people hiding inside the town and also searched for certain information revealing things, which could prove beneficial for us.

During the detailed search carried out it was found that Maharjke was a Pakistani ‘Police Training Centre’ designed more or like a cantonment. Some of the things which we recovered from the place were logistic support vehicles (two battery operated, American origin jeeps) and personal belonging of soldiers ranging from garments, blankets, shoes and trunks.