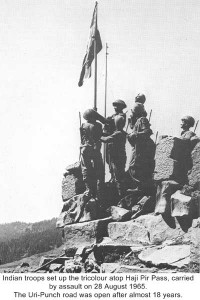 Their pre-commission training periods were reduced in duration and cadet strength was increased manifold. As the war clouds gathered in 1965, it was a fact that joint training and joint thinking between the army and the air force had suffered due to extreme pre-occupation with expansion. In such an environment the procedures and organisation for air support of the army also suffered.

PAF flew far lesser number of close air support sorties than the IAF. (1400 Vs 481). Yet many authors credit the PAF with better effectiveness in this department.

Elaborating on the subject, Air Chief Marshal PC Lal stated, “An Advance HQ was established alongside Army’s Western Command; but further extension of this into the Corps and down to level of Brigades, where Forward Air Controllers operated was not established. Those tentacles did not operate. The result was that the Army’s demands from the forward area came directly into the Advance HQ.

There the messages piled up in baskets without the Army or the Air Force officers being able to sort out the important from the unimportant ones or assign priorities for different demands… No specific earmarking of squadrons or units for support of a particular area or corps was done…It took the Army a whole day or two days to get the demand through from forward area to the Air Force”.

General Harbakhsh in his book “War Despatches” stated, “… professionally below standard army officers manned ground liaison offices type B and C. Also gross-shortage – out of an authorised total of 43 officers, the Army had only 12.” Ground liaison officers from the army coordinate air support at various levels, namely at Headquarter Air Command, at airbases and in each brigade. Even the official history states, “Indian troops lacked an efficient communication system. Wireless sets were inadequate and they often failed to work. Also due to the vibrations of cross country movement, the preset frequency on the radio set got disturbed”.1

In the Battle of Asal Uttar the valiant performance of 4 Div and 2 Indep Armoured Brigade was equally well backed by the air support.

In addition to this neglect of jointness we also saw the result of obsessive security by the Army Chief. The Army Chief had contingency plans to expand the conflict across the International Border – should the situation in J&K demand relieving pressure there. But his keenness to ‘Secrecy’ compelled him not to share this plan and its likely timings with the IAF and the IN – with attendant adverse fall out.2

Therefore, it would be naive to expect wonders as far as air support of surface forces was concerned in the 1965 war. Yet an examination of air support reveals that IAF provided far better air support to IA when compared with PAF support to Pak Army. But while PAF boasted – IAF kept a low profile.

Let us therefore examine the statistics. IAF flew a total of 3937 sorties. Of these about 1400 sorties were towards support of the ground forces. IAF claimed following: 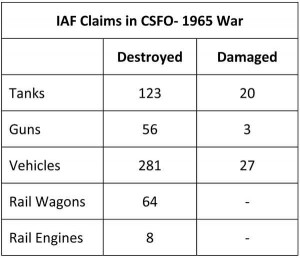 There seems little evidence of advanced and thorough joint planning in respect of our planned offensives in Lahore and Sialkot sector. Once these attacks were launched, there were demands to support these attacks, but more in the nature of ad hoc search and strike missions in deeper areas.

The name “search and strike” itself suggests that such missions cannot produce better results compared to the missions planned in advance. 482 sorties were planned at JAAOC level that is Joint Operation Centre at Command level.

Normally this planning should be at Headquarter Corps level. As a result of this, often the supporting Tactical Air Centre with the Corps Headquarters did not know about own air support sorties in time. Though No 11 Corps launched three major attacks and faced one major attack, at Lahore, Burki and Kasur respectively, its demand for immediate air support was only 99. Rather less.3

This too corroborates with evidence that the pilots of the IAF were often waiting for demands from the Army.4 Some examples, gleaned after careful research are listed below to illustrate the above point.

But when the war was forced upon us by Pakistan we flew nearly three times the sorties flown by PAF for direct support of our Army. Pakistan had planned this war. Therefore, they should have performed better while supporting Pakistan Army.

However, what has been overlooked by most commentators is that the PAF’s coordination with the Pak army was not so good as has been projected. Even though they flew about one third the number of sorties compared to the IAF, they had three times the losses due to fratricide. On 4 Sept Pak army troops shot down their pilot Flt Lt Amanullah Khan in Jaurian sector. On 8 Sept Pak Army shot down another Sabre and on 11 Sept they shot down their own Canberra.9

IAF too lost one pilot due to fratricide. He was Fg Offr Ram Chandani. On 21st night, Pognai – West of Ichogil Canal was taken over by our troops. However, this information was not available at Ambala on 22nd morning, when Mysteres were tasked to attack Pognai. In the process our troops shot down this Mystere. Ram Chandani ejected but later died in the hospital.10

PAF’s limited success in blunting 15 Div attack towards Lahore was more due to our “Secrecy Syndrome” not permitting joint Army, Air Force operation rather than any significant achievement by PAF.

Our own air support on 1st Sept to halt the Pak armour thrust at Akhnoor was highly effective. The 28 sorties in the dying hours of daylight halted the Pak advance in its tracks. IAF destroyed 10 Tanks, 2 Air Defence Guns and about 30-40 vehicles. But at a heavy price. We lost 4 Vampires and three pilots. Brigadier Gulzar Ahmed of Pak army commented that Pakistan, having launched attack on 1st Sept expected reaction from the IAF. Therefore, it had its airborne fighters available.

IAF should have sent its air defence escorts with Vampires and also mounted similar CAP for its 6th Sept attack against Lahore. In the Battle of Asal Uttar the valiant performance of 4 Div and 2 Indep Armoured Brigade was equally well backed by the air support. No 1 Squadron flying Mysteres gave close air support on 8th Sept at Asal Uttar; Mysteres of No 31 Squadron interdicted the supply line shooting up trains bringing reinforcements; Hunters of 7, 20 and 27 Squadron interdicted Raiwind railway station and the sector of Kasur, Khem Karan. Canberras bombed enemy positions on 15th Sept.

Thus, our organisational problems were mostly a result of sudden expansion of Army and Air Force post 1962 war. But when the war was forced upon us by Pakistan we flew nearly three times the sorties flown by PAF for direct support of our Army. Pakistan had planned this war. Therefore, they should have performed better while supporting Pakistan Army. But the fact that their fratricide was three times more than IAF’s, while the air effort was only one third, shows clearly the poor Pak Army – AF coordination. And the fact that Pak Army’s offensive was foiled both at Khem Kharan and Chhamb shows the lack of effectiveness of their air support. PAF’s limited success in blunting 15 Div attack towards Lahore was more due to our “Secrecy Syndrome” not permitting joint Army, Air Force operation rather than any significant achievement by PAF.