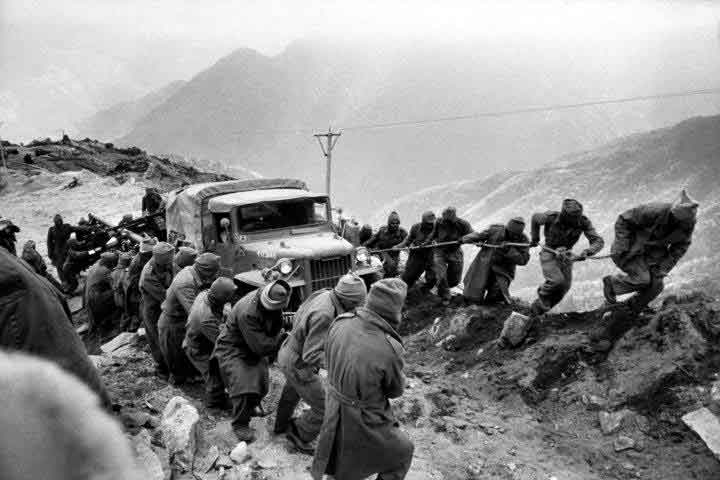 We in India are perhaps perplexed to this day, over half a century later, as to why the Chinese attacked us in October–November 1962 despite our continued efforts to befriend. Both India and China were ancient civilisations, although with little interaction over centuries. In addition, both had thrown off colonial masters and were focused on improving the lot of their teeming millions. Perhaps it was our idealism and lack of understanding of real politic that was responsible for the humiliating debacle in 1962, a trauma that continues to haunt many in India.

During the 1962 war, India was left isolated. Barring Western countries like USA and UK, none came to India’s aid, though India considered herself as the leader of the Non-aligned Movement. The need therefore is to build strong alliances.

The Sequence of Events leading up to the War

When the Chinese People’s Republic came into being on 1st October, 1949,India was among the first and very few countries to recognise it.  In Nehru’s worldview, these two Asian giants could together start a new Asian era. Indeed, at that time, no differences existed between the two countries, which could lead to hostility. However, that did not take into account the devious and complex Chinese mind, which even at that early stage had rationalised that only one of the two countries could be an Asian power. It was China’s goal to see that India remained confined to South Asia. Pandit Nehru, who was both the Prime Minister as well as External Affairs Minister, could not read the Chinese intention. His colleagues in the Congress party, although men of stature themselves, were content to leave foreign policy solely in Nehru’s hands, which proved detrimental to national interests.

The first sign of discord between India and China came in 1950 when Chinainvaded Tibet. This was blatant aggression as historically, Tibet has never been a part of China. The Tibetans looked up to India for help but India’s feeble protest merely antagonised the Chinese without helping the Tibetans.India now had to contend with China on its Northern and Eastern border. Though not demarcated, these borders were well defined by various treaties and usage right from seventeenth century. Opportunities to negotiate a border settlement in the fifties existed, but were not seized. India entered into the Panchsheel Agreement with China in 1954, hoping to put an end to Chinese provocations but that was not to be. On the contrary, China illegally occupied the Aksai Chin and completed construction of their Western Highwaythrough it in 1957. To counter continued Chinese aggression, India embarked on a policy of establishing a series of small posts all along its Northern and Eastern borders with China, to prevent further incursions. Called the ‘Forward policy’, most posts were not capable of giving a fight to the Chinese and were logistically unsustainable. Coupled with this, India neglected the improvement of infrastructure in the border areas, which was to cost the country dear when the conflict started in 1962.

Around 1959-60, the Army was ill prepared to fight a war with China, but the army leadership still went along with the disastrous Forward Policy.  Nothing illustrates this better than deploying a brigade on a river line in Namka Chu against all tactical norms. The outcome was a foregone conclusion – a debacle. By now the Chinese had made up their mind that since India was not negotiating the border issue to their satisfaction, which was basically  bartering the Aksai Chin in Ladakh for Chinese acceptance of the McMahon Line in Arunachal Pradesh, they would “teach India a lesson”.

India and China are two growing Asian powers and hence a clash of interests is inevitable.  The key is to keep it manageable and not allow it to flare up into another border war.

On 20 October, 1962, they overwhelmed 7 infantry Brigade deployed on Namka Chu River in Western Arunachal Pradesh and launched massive offensives both in Ladakh as well as Arunachal Pradesh.  After gaining their initial objectives, the Chinese took a tactical and logistic pause for three weeks before renewing their offensives. On achieving their objectives, they announced a dramatic unilateral ceasefire on 20 Nov 1962 completing India’s humiliation.

The Border Question and the Way Ahead

The India China War of 1962 erupted due to the different perceptions of the border.  This issue has defied any solution for the past six decades primarily because China uses this as a pressure point to keep India unbalanced. It has also developed its strategy of India’s encirclement by reducing India’s influence in the region. We must however, not make the mistake of solving the border issue on China’s terms. The issue can keep hanging fire for as long as it takes but it must not hinder our economic development.

Meanwhile, we need to proceed with our military modernisation and improvement of infrastructure in border areas, which has sadly been neglected for the last half a century. We must also continue our economic engagement with China and correct the trade imbalance.

India and China are two growing Asian powers and hence a clash of interests is inevitable.  The key is to keep it manageable and not allow it to flare up into another border war. It will be tough test for our diplomacy.