Home  >  News  > Geopolitics  >  Women May Cause Implosion of Pakistan

Women May Cause Implosion of Pakistan 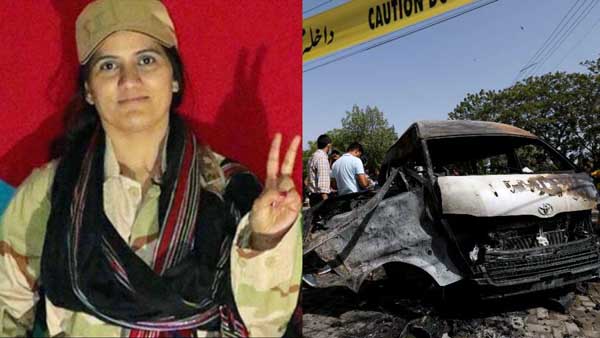 Two recent incidents are reflective of the growing jihadi and insurgent role of women in Pakistan. On 26 April a Baloch lady teacher turned into a human bomb and killed three Chinese and a Pakistani driver in Karachi, and barely a month before, a two girl students egged on by their teacher, in an all girls school in Dera Ismail Khan, bled another teacher to death by slitting her throat for alleged blasphemy.

The suicide bombing was not Pakistan inspired, but Balochistan centric. It was addressed to the economic and cultural concerns of Balochistan rather than Pakistan.

These two incidents need to be discussed in detail because weaponisation of women in Pakistan for political, geopolitical and religious reasons and objectives is likely to compound the ethnic and religious volatility of Pakistan with reverberations in the subcontinent and even beyond.

The name of the Baloch suicide bomber was Shari Baloch. She owed allegiance to the Majeed Brigade of the Balochistan Liberation Army (BLA). She was a young mother of two children. Her husband is a dentist, and father a respectable government servant. She was a teacher with impressive array educational degrees to her credit i.e. masters in education, a masters in zoology and a M Phil degree as well, and yet she volunteered to be a suicide bomber. Her targets being the three Chinese teachers of the Confucius Institute in Karachi University.

Earlier the BLA selected only those targets which were associated with the China Pakistan Economic Corridor (CPEC), but this time it was the perceived cultural ingress by China. In the wake of the suicide bombing, the BLA issued a statement that it will not brook economic, cultural and political expansionism by China in Balochistan. The suicide bombing therefore was not Pakistan inspired, but Balochistan centric. It was addressed to the economic and cultural concerns of Balochistan rather than Pakistan.

The alienation rather hatred of the Balochis for Pakistan can be construed from the lack of any remorse at the loss of the Pakistani driver in suicide bombing. The strategic and geopolitical imperative of China for Pakistan, particularly the military is not shared by the Balochis, hence they do not want to be burdened by the economic and strategic weight of the CPEC. Also, while rest of Pakistan which includes the fundamentalists and Islamists, may view China with anti India and anti Hindu prism, the Balochis are not driven by this psychology.

Ever since the creation of Pakistan the Ahmediyas and Shias have been incessantly targeted by the State backed radical Sunni outfits.

The anti India and anti-Hindu component in Pakistan’s and some quarters of 57 member OIC in their approach to China came to the fore in the recent meeting of the foreign ministers of the Islamic body held in Islamabad. 46 countries and 800 delegates participated and hammered their concern on Palestine and Kashmir. In addition they discussed Afghanistan, Yemen, Libya, Sudan, Somalia and Syria, but there was not a whisper on the treatment of Uighur Muslims in China. A substantial time was devoted on the growing Islamophobia in non-muslim parts of the world. To get to the roots of the phenomenon, Pakistan has to look only within. Ever since the creation of Pakistan the Ahmediyas and Shias have been incessantly targeted by the State backed radical Sunni outfits. Ahmediyas are treated as sub-humans and Hazara Shias are being forced to flee the country in search of safer homes. Even the Sunnis are at each other’s throat to prove who is a truer muslim, manifesting in the endemic blasphemy killings. Pakistan therefore is the most Islamophobic country in the world.

Very significantly the foreign minister of China, Wang Yi, was present as a special guest during the meeting. This was the first time that a Chinese FM had been invited to the OIC conference. The FM of Pakistan went to the extent of saying that the participation of the Chinese FM was a propitious indication of $400 mn investment by China in Muslim countries under the Belt Road Initiative (BRI). Infact Pakistan has been trying to act as the bridge and facilitator for extension of the Chinese strategic and geopolitical influence in the Islamic world.

The anti India, anti-Hindu and may be anti West notions are inherent in this outreach and facilitation by Pakistan. The territory of Balochistan is critical part of this bridge which the Balochis are resisting tooth and nail. For the Balochis the problem is getting more acute in the backdrop of the fact that China is wooing Afghanistan to become part of the BRI.

China appears to be more than determined to fill the strategic vacuum in Afghanistan created by the American withdrawal and also because of the current global focus on the conflict in Ukraine. The foreign minister of China, Wang Yi visited Afghanistan undeterred by any human rights concerns about his hosts. The other two countries to have sent their foreign ministers to Kabul are Qatar and Pakistan.

This latest attack by a burqa clad female suicide bomber is an epoch making event with deeper and wider portends for the territorial integrity of Pakistan.

It is rather revealing that China has been attacking the very foundations of Islam in dealing with the Uighur Muslims in the Xinjiang province, yet jihadi countries like Pakistan and Afghanistan are so beholden to the Chinese communist dispensation. In this there is a lesson for India, i.e. it pays to be steadfast and firm in national philosophy and direction. The world community, takes such countries seriously, but in case a country is seen wavering in national ideology and nationalism as such, it sends confused signals, and engenders inimical forces internally and externally.

The action by the BLA’s female bomber was motivated by ethnic Baloch nationalism. Earlier in 2018 the BLA had attacked the Chinese consulate in Karachi but amongst those killed, there were no Chinese. In 2017, a Chinese man and woman, engaged in teaching Chinese language, were abducted and killed. These were violent assertions of Baloch nationalism, but this latest attack by a burqa clad female suicide bomber is an epoch making event with deeper and wider portends for the territorial integrity of Pakistan. The Pakistani dispensation understands this very well, that is why Shahbaz Sharif personally visited the Chinese embassy to placate and reassure the Chinese.

It is quite a contrast from the July 2021 incident wherein ten Chinese officials, mostly engineers were killed and 26 injured in a bomb attack on a bus ferrying them to the site of 4320 MW Dasu Hydroelectric Project, in Kohistan in Khyber Pakhtunkhwa. That it was a terrorist attack– the Pakistani authorities were in denial for a very long time, however, subsequently they agreed to pay a compensation of $ 11.6 mn. This World Bank funded project is not part of the CPEC. Whether this was for jihadi reasons or ethnic reasons is not known, but one thing is certain that large segments of Islamic terrorist groups active in Pakistan, specially the pan-Islamist ones, do not share the same enthusiasm about China as the Pakistani dispensation.

In 2007 Musharraf ordered attack on the Lal Masjid in Islamabad at the behest of China because the jihadis operating from the masjid had abducted and killed some Chinese nationals running a massage parlor. Amongst those killed were more than a dozen Uighur muslims, members of the East Turkistan Islamic Movement(ETIM).Therefore the deafening emphasis by China and Pakistan, that their friendship is “higher than Himalayas, deeper than ocean, sweeter than honey and stronger than steel” is heavily burdened on the latter, almost like colonial relationship. Obviously then, there are bound to be fundamentalist constituencies in Pakistan who resent this relationship as it blunts the Islamic agenda and image of Pakistan, the very basis of its elusive nationhood.

Till now only the male jihadis were the perpetrators who hunted for the victims, but now it seems, the women are getting as brutalized as their male jihadi counterparts.

As discussed the impetus behind the Shari Baloch suicide bombing was Baloch nationalism, but the brazen killing of a 21 year school teacher in an all girls school at Dera Ismail Khan was motivated by Jihad and driven by Pan Islamism and Islamophobia. What smites the human heart is that the killers were girl students, egged on by another lady teacher. Together they slit the throat of the victim and bled her to death. The victim was accused of blasphemy and the assassins maintained that the orders for the assassination came directly from Prophet Mohammad by the medium of dream of 13 year old girl relative of one of the perpetrators.

Such blasphemy killings have become routine in Pakistan nevertheless, till now only the male jihadis were the perpetrators who hunted for the victims, but now it seems, the women are getting as brutalized as their male jihadi counterparts. If this phenomenon persists, Pakistan will completely inhabited by jihadi beasts, because the sobering influence of the fairer sex would have disappeared. That even after 1400 years, even after creation of Pakistan — a homeland for Muslims — the hunt for ‘blasphemers’ amongst muslim continues unabated, demands serious and in-depth study.

It is impossible for such radicalized societies to co-exist with other communities and faiths. Such monochromatic societies are bound to implode.

2 thoughts on “Women May Cause Implosion of Pakistan”