Home  >  News  > Homeland Security  >  Why there is an attack in Dinanagar?

Why there is an attack in Dinanagar? 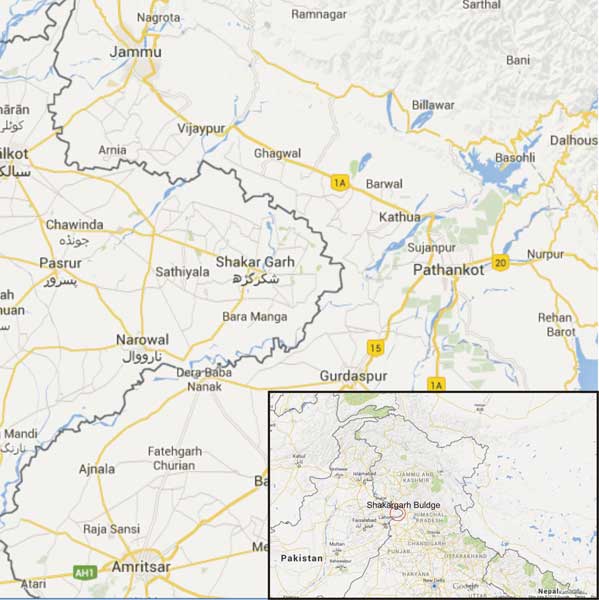 The foregoing eighteen months have witnessed three major jihadi attacks along the Pathankot-Jammu highway. This highway, NH1 (A), which serves as the lifeline of J&K runs parallel to the International Boundary (IB) with Pakistan. Most prominent places along this axis i.e. Kathua, Hiranagar, Sambha, RS Pura, have been subjected to terrorist attacks from Pakistan. With endemic attacks, the NH1 (A) is fast acquiring the infamy of ‘terror highway’.

…this Pakistani enclave (‘Shakargarh Buldge’) jutting into India can serve as a launch pad for infiltration and terrorist attacks both on some LoC portions beyond Akhnoor and IB portion southwards.

The latest attack in Dinanagar near Gurdaspur is being interpreted as revival of Khalistani terrorism in collusion with Pakistan sponsored jihadi terrorist organization like the LeT and the ISI. While this may be true to an extent, this angle should not be over-exaggerated. The geographical truism is that from Jammu to Amritsar the area should be treated as one strategic entity.  This is engendered by the ‘Shakargarh Buldge’. This entire bulge which witnessed some intense battles during the 1965 & 1971 Indo-Pak wars is being used by Pakistan’s military-intelligence complex as a pivot for cross border operations by jihadis. This bulge dominates the entire NH1 (A) in both the Punjab and the J&K segments. Further, the bulge facilities selection of targets astride the highway by the jihadi terrors, as it is dotted with security forces, security establishments including cantonments.

The highway also facilitates switching over to alternate targets with relative ease. The communication networks and riverine portions being trisected by Jhelum, Chenab and Ravi in the bulge offer ideal launch pads for infiltration across the IB. In the larger context this Pakistani enclave jutting into India can serve as a launch pad for infiltration and terrorist attacks both on some LoC portions beyond Akhnoor and IB portion southwards. It is ironical that going by the imperatives of conventional war, a Pakistan enclave like Shakargarh Bulge is strategically disadvantageous to that country but is an asset in conduct of proxy war.

In September 2013 attacks on 16 Cavalry premises near Jammu where in the Second-in-Command was killed and the CO was injured or in May 2014, in the attack on Army Camp in Samba or again in the attack of March 2015 in another Army Camp also near Samba, or in the latest attack in Dinanagar (Gurdaspur), some common features have been observed with regard to the modus-operandi of Pak sponsored jihadis. In all these attacks the jihadis donned combat fatigues; all attacks were carried out in the wee hours of the morning; in all attacks the terrorists commandeered Indian vehicles, killing the occupants on most occasions; in all attacks, the jihadis divided themselves in groups, one group invariably bifurcated to attack a police station and in all the attacks the jihadis were equipped with GPS. In the September 2013, one group was tasked to attack a Army Public School and take children as hostages, but reportedly failed to so as the GPS did not work. This kind of operational flexibility and ability to use sophisticated arms and equipments is not possible without extensive training and support of regular army.

There are also inputs from Pakistan sources to suggest that the Pak Military-Intelligence establishment is acutely apprehensive that the LeT, if not kept in regularly employed against India may turn against Pakistan…

All the attacks had indelible imprint of the LeT. The region of Shakargarh Bulge, particularly the Sialkot sector is the most fertile ground for recruitment by the LeT. Hafiz Saeed visits the area very frequently to spread his brand  of rabid religious fundamentalism and anti-India venom. Following the May 2014 attack in Army Camp in Samba and Hiranagar Police Station, the Al Shohhada group, a shadowy organization of LeT claimed responsibility.

What could be the objective of attacks astride the NH1A? Is it to terrorize India?

Well no one in India is getting terrorized!

There are many reasons that can be ascribed to unleashing of LeT terrorists on NH1A, the chief being to keep the anti-India terror industry oiled and alive. It is a very important rather critical facet of proxy war by Pakistan against India. Since, proxy war will continue to be Pakistan’s strategy in the foreseeable future, the Indian security establishment particularly the Indian Army must re-orientate itself in appropriate measure from conventional war to all facets of proxy war. The Technical Support Group (TSG) raised by the Indian Army in wake of 26\11 to deal with Pak sponsored terror yielded fantastic rather disproportionate results but was intriguingly abandoned with the change in Army dispensation.

There are also inputs from Pakistan sources to suggest that the Pak Military-Intelligence establishment is acutely apprehensive that the LeT, if not kept in regularly employed against India may turn against Pakistan like the Tehreek-e-Taliban Pakistan (TTP) and many other groups like the Lashkar-e-Jhangvi (LeJ), whose loyalty to the country cannot be trusted. The Afghan-Taliban too is no longer bridled by Pakistan. With the reported death of Mullah Omar, who till now was enjoying Pak hospitality the drift may irreversibly accelerate.All these jihadi organizations are Wahabi in orientation and so is the LeT. Most of these except the LeT have either drifted or are drifting away from Pakistan. Then there is also the new and powerful phenomenon of the ISIS. Its ability to attract youth for the cause of Islamic Caliphate is formidable. Unlike other jihadi outfits the ISIS has tangibles like territory to boast and therefore its increasing appeal.

…before or after, execution of every death penalty of Pak sponsored terrorists in India, there have been terrorist attacks…And now the attacks in Gurudaspur coincide with controversy over death penalty to Yakub Menon.

Some top leaders of the TTP and Afghan-Taliban have already joined the ISIS. Attacks on Shias in Karachi and Balochistan have been master-minded by educated youth self-motivated by the ISIS. They all were self-indoctrinated through social media. Pakistan and parts of India form very much part of the map of Islamic Caliphate envisaged by Baghdadi. Hafiz Saeed is therefore facing increasing competition from Baghdadi.

It may also be suggested that most attacks by the LeT on NH1 (A) axis have coincided with meetings before or after — between the Prime Ministers of India and Pakistan. The latest attack in Gurdaspur comes in the wake of meeting between Modi and Sharif at Ufa on the sidelines of Shanghai Cooperation Organisation (SCO)Meet. Similarly, the attacks at Sambha in September 2013 were just before the scheduled meeting of Manmohan Singh and Sharif on the sidelines of UN meet.

Also, before or after, execution of every death penalty of Pak sponsored terrorists in India, there have been terrorist attacks. Just before Ajmal Kasab was to be hanged there were bomb blasts in Pune. Following the hanging of Afzal Guru there were blasts in Hyderabad, Kashmir and Bengaluru. And now the attacks in Gurudaspur coincide with controversy over death penalty to Yakub Menon.

The jihadi attacks on India from Pakistan are therefore motivated by: wider Islamic discourse; the strategic imperatives of Pakistan military-intelligence establishment, to alter the political discourse in India; and most importantly to keep the jihadi terror industry in Pakistan alive. These are various facets of proxy war by Pakistan against India. As far as use of terrorists to change the political discourse in India is concerned, two examples are glaring, i.e. the attempt to label 26/11 as ‘Hindu Terror’ by LeT and the attempt to assassinate Narendra Modi in the Patna rally.

In all these attacks the LeT used suicide attackers. The attacks on NH1A have all been carried out by the suicide squads which the LeT produces in plenty. The security set-up opposite the Shakargarh Bulge therefore needs major revamping as it impinges both on the IB and the LoC — in that there is a case in handing over the first two tiers of security of the Indian Army.