Home  >  News  > Geopolitics  >  Why journalists get killed in Pakistan?

Why journalists get killed in Pakistan? 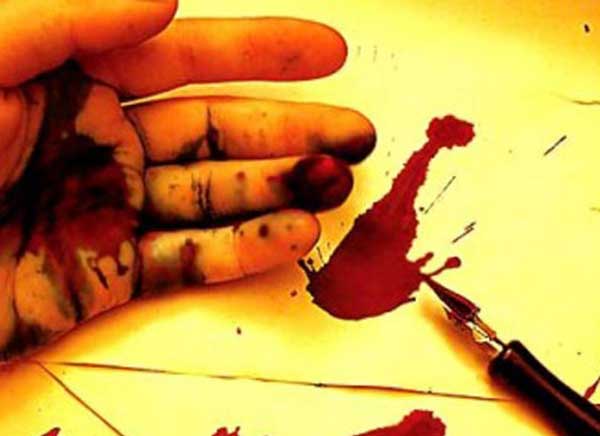 By no account can Pakistan be called a conflict-ridden country like Iraq and Syria but it is as dangerous a place for journalists. Two journalists were killed in the last few weeks. Last year, several more had lost their lives to targeted killings. But a lot more had been abducted, thrashed and hung upside down to punish for daring to speak out, to cross the red line, to speak against the military and to report the truth. No one has been held accountable for these killings. The media itself has chosen to be quiet on this. Truth has for long been a casualty in Pakistan.

No one likes the idea of a free media in Pakistan, except perhaps a handful of journalists who today live in the shadow of fear and death.

No one likes the idea of a free media in Pakistan, except perhaps a handful of journalists who today live in the shadow of fear and death. The political leaders want the journalists to cover only “good“ news, about them, about their long-winding speeches, their lies and insinuations but not about their lavish lifestyle, their corruption, their deceptive and divisive politics. Rarely has there been an expose of a senior political leader in Pakistan. And even if by accident a court or an investigative agency does bring out instances of corruption and wrong-doing, a day or two of coverage, that too minimal, before such stories are buried forever. For instance, no one remembers, not even the journalists, about the celebrated Supreme Court judgement a few years ago about how Pakistan Army and ISI had manipulated the political process by bribing high-profile politicians. There was a minor brouhaha in the media and then everything went dead. Then there were the allegations of corruption and misdemeanour against senior Army officials. Reports appeared sporadically and then went quiet.

There was also the case of disappeared persons in which several ISI and army officials were indicted by the Supreme Court. These cases related to the Baloch men and women who were abducted, tortured and either incarcerated in secret jails or killed brutally. The Supreme Court was petitioned by the relatives of the disappeared Baloch in 2005-2006 and the court finally had acknowledged the gravity of the charges against the military and pursued the case to find several middle and lower rung officers guilty of extrajudicial killings and actions. But, like other cases, nothing was heard of the proceedings or final orders holding the army officers guilty.

Cases of corruption are not the only one to be buried. Investigations into the blatant killing of journalists rarely, if at all, reach any conclusion. The most infamous case was that of Syed Salim Shahzad who was once close to the military establishment but fell out over his surprise insistence on reporting about the terrorist attack on the Pakistani naval establishment at Mehran in May 2011. Shahzad had reported on militancy for quite some time and was known to keep good sources among the militants as well as the military. But his reporting of possible radical infiltration of the naval establishment did not go down well with the military establishment. The army knew about the radicalised sailors and would rather take them out quietly than getting reported widely. Shahzad disappeared near his house and his brutalised body was found dumped not far from his house. No one took responsibility. Nothing was heard about the sequence of events and the reason for his disappearance. Shahzad of course had known that his life was in danger and had forewarned so to his confidants and family members. Some journalists dared to question the role of the intelligence agencies in the murder of Shahzad and compelled the Zardari government to order an inquiry. Everyone knew that it was a face saving gesture. The committee submitted its report and as expected only echoed doubts about the role of intelligence agencies, especially the ISI. Nothing was heard of the matter since then. No FIR was filed. No demand was made either from the family or from the media about pursuing the murder case.

…barring a few who raised their voice, there was no public outcry, no black banners in newspapers and no journalist or media house even threatened to boycott the government.

The case of famous journalist, Hamid Mir, is more recent and equally mysterious. He was shot while travelling in his car in April 2014; he escaped with four bullets and life. He carries the two bullets inside him even today. But no one knows who shot him. His brother, a journalist, said it was the handiwork of ISI. He said the intelligence agency was not happy with Hamid for various reasons and had warned him in the past. So furious was the ISI with these allegations that the entire military establishment came down heavily on Geo TV where Hamid Mir worked. It was the state brutality in full show. But, barring a few who raised their voice, there was no public outcry, no black banners in newspapers and no journalist or media house even threatened to boycott the government.

The attack on Hamid Mir was not merely to intimidate him alone but the journalist fraternity in general. The message was if a famous journalist like Mir can be taught a lesson, others, less famous and connected ones cannot hope to take on the state and live to write the tale.

Rasool Dawar was another Geo journalist who faced the wrath of the establishment. A journalist with nine years of experience, Dawar was Geo News TV’s correspondent in Peshawar. After the Mir incident, he was picked up by anonymous intelligence officials twice, threatened and interrogated and told to get out of Peshawar, the capital of the northern province or face consequences. He was arrested in February this year and again in April by men in Army fatigue and interrogated blind folded. He fled to Islamabad and had not returned to Peshawar where he knows he would be killed.

No wonder more and more journalists are either going silent or fleeing their country. Raza Rumi was one; he was a well known journalist and fairly active in the think-tank business. He has never been a harsh critic of the military but has been courageous enough to point out where an enlightened military leadership could make a positive contribution to the well being of Pakistan. His mildly critical pieces attracted rebuke first and then someone took a pot shot at him. This attack followed days and weeks of direct and veiled threats. Rumi quietly fled the country and now lives in the US.

Between bullets and a dictatorial regime, journalists in Pakistan now have to contend with a restrictive code of conduct which effectively would force them to either quit being a journalist or face the threat of incarceration.

Between bullets and a dictatorial regime, journalists in Pakistan now have to contend with a restrictive code of conduct which effectively would force them to either quit being a journalist or face the threat of incarceration. The code is called the Electronic Media (Programmes and Advertisements) Code of Conduct 2015 and it came into effect in August this year. A cursory reading of the provisions tell you that the code was heavily staked against any right thinking journalist. Not only has commenting on religion become a taboo and crime but a journalist cannot now criticize the military and the judiciary. Since the code does not clarify what all would constitute an infringement of the law, the state is now empowered to come down heavily on any media house or journalist and remain within the ambit of the so-called law.

The fact that the code is a dangerous instrument in the hands of the state becomes clear by the clauses which restrict the coverage of “ongoing security operations” or reporting the “number of victims” during security or rescue operations. The journalists also cannot now report what they see or hear in conflict zones but “in accordance with the guidelines issued by the concerned law enforcement agencies”.

It is literally a case of caught between the deep sea and devil for all right thinking journalists in today’s Pakistan.

One thought on “Why journalists get killed in Pakistan?”