Why Drone Collaterals are Inevitable? 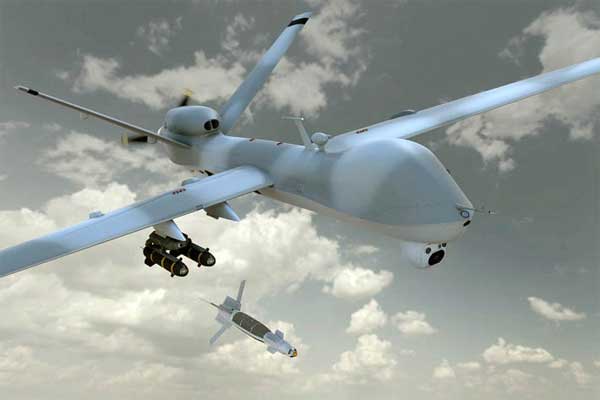 There is a lot of resistance world over on the loss of innocent civilian lives in the drone phenomenon. ‘Reprieve’, an organisation of front line lawyers and investigators in US working for people worldwide suffering from extreme human rights abuses at the hands of powerful Govts has assessed that for every intended target an average of 28 innocent (unknown) lives are being sniffed out in drone strikes[1]. In their 2017 Report titled ‘Drones and Assassination’, Reprieve has claimed that in one case, to take out one ‘targeted person’ a total of 76 adults and 29 children got killed in failed attempts to get to the target[2].

Why The Drone Collaterals are Inevitable – A Technical Analysis?

This article attempts to analyse the premise – ‘are drone collaterals inevitable given the level of technological sophistication that obtains today in the front-line unarmed aerial system (UAS)?. The details of the analysis is at succeeding paragraphs.

Considering the basic setting of Ground Control Station (GCS) with a human pilot and a sensor(payload) operator controlling a UAS remotely for detection, tracking and firing on the intended targets, the factors that can cause inaccuracies in the so called ‘preciseness’, could be the limitations in the Operator Training, delays and inaccuracies in the Communications/Satellite Link between the GCS and UAV, limits of accuracies in the Sensors on board the UAS to take an accurate target fix and finally the technical limitations of the weapons being fired from the UAS in limiting collaterals. The analysis focused on each of these, less the factor of Operator Training which being a human intangible is always debatable/contestable. As a reference, Predator/Reaper class of UAS were considered to drive home the larger issue.

As to communication, data linkages and connectivities, normally the entire network is built over High/Very High/Ultra High Frequency (HF/VHF/UHF over voice/data) cellular/landline telephones with hardware connectivity to the satellite Communication (SATCOM) terminals. The Line of Sight (LOS) data link between the GCS and the UAS is based on C Band (4-8 GHZ) while KU band (11.2-14.5 GHZ) is employed for Beyond LOS (BLOS) operations.

•  The first source of probable inaccuracy in what is commanded and what is executed gets inserted in the loop due to an inherent delay between the moving of the joystick by the GCS operator and the UAS receiving the command. In the Reaper UAS, this delay is about 1.2 Seconds as of date[3]. While it can be contested that once the UAS is on locked track, the few seconds of lag is no issue, the fact that the UAS, in the above time lag, given its speed of hundreds of knots (220 knots/390 km/h/108.42m/s) will be traversing an almost the edge of the area where command was given to take out a human target, does merit a thought.

•  The next issue that directly affects accuracy is the capability of the sensors on board the UAS to acquire a target. A typical sensor suit on board a frontline UAS may include visual sensors for targeting, Short/mid wave band IR sensors, colour/monochrome daylight TV camera, image intensified TV camera, laser range finder and designator and laser illuminator. Cumulatively, this suit is referred to a s a Multi-Spectral-Targeting System (MTS).

•  The heart of the MTS in a modern UAS is the Synthetic Aperture Radar (SAR). Much of the accuracy of fire will depend on how accurately the radar is able to distinguish one (target) from the other (implying humans). As a reference, take the case of Lynx SAR operating in the KU Band (15.2-18.2 GHZ) on board the Reaper UAS. Lynx is a high resolution SAR with two different modes of search. In the Geo-Referenced Strip map Mode (Strip Mode) it images a precise strip on the ground as defined by the operator. The resolution is 0.3-3m in the range bracket of 7-30 km with a ground swath of 2600 pixels. In the Spotlight Mode (concentrated on a desired spot in target area), the resolution is 0.1 -3 m. Besides, the SAR has a Ground Moving Target Indicator (GMTI) to distinguish between moving and stationery targets and a CCD (Coherent Change Detection) capability to indicate minute changes in two SAR images taken at different times[4].

•  Even with the above capability (resolution 0.1 min spotlight mode) on board, the experience of seeing many a video clips employing the Reaper in which while the GCS operator is pin-pointing on the specific target to be taken out , the effect on ground is always a area catastrophic damage that invariably does not limit itself to one individual. Why?

•  Why, brings the thought on the type of armaments being fired. At the onset it is stated that all the hunter-killer UAS of today are the incarnation of ISR (Intelligence, Surveillance, Reconnaissance) UAS of yesteryears implying thereby, that the hunter-killer (find-fix-finish) role is essentially a retrofit achieved through the weaponisation of the unarmed machines otherwise dedicated for surveillance and reconnaissance.

*  Raytheon Griffin is a desired weapon. It is a PGM carrying a relatively small warhead with Laser/GPS/INS guidance on board. The missile is specifically designed for a low collateral damage effect.

*  MBDA (UK) Brimstone is another modern day PGM. Its earlier fire-and-forget version using a mili-metric-wave active radar dual-moded with INS autopilot yields an accuracy of sub-1mCEP. The homing seeker has been adapted to laser guidance providing the firer to pick and choose the target among frendlies. Its tandem shaped warhead and small blast area reduces collateral damage.

*  Paveway II is a General purpose Laser-guided bomb. Over a period of time Raytheon has been able to improve the accuracy of its laser designated guidance bringing down its CEP to a mere 3.6 ft.

*  GBU 38 uses the Boeing standard Mk 82 bomb with JDAM guidance kit converting the dumb to smart munition. While this “bolt on” guidance does improve accuracy, it does has collateral effects.

A look at the aforesaid does throw some light on the question , ‘are drone collaterals inevitable..?. Some important points are as under:-

•  Hunter-killer is not an original but a derived concept from its mother platform, essentially designed for ISR .

•  With the mobile multi-spectral targeting systems (MTS) capable of feal-time imagery selectable amongst infra red, day TV or laser is becoming more and more technologically advanced , while it may be possible (resolution 0.1 m) to point at a needle (intended human target), the weapon system on board can only hit a haystack (albiet continuously shrinking) implying the collateral.

•  Initial munitions being fired was essentially anti-armour (with their attendant limitations on warhead and circular errors of probability or CEP). These are certainly not low-collateral weapons.

•  Though precision guided munitions (PGMs) have kicked in (and counting) not all engagements are with Griffin/Brimstone type of munitions.

•  Hunter-Killer is one of the many roles the UAS are being optimised for today. Case in point is the recent development, where live feeds from the MTS of the front-line UAS systems is being thought of as a cue to ground/space based sensors to detect incoming Ballistic Missile threats especially in Boost/post-boost phase.

In essence, the analysis reveals that collaterals in the UAS missions are a function of the technological limitations of sensors and munitions of date.

It is also the opinion of the author that the said collaterals in UAS operations is likely to continue (albeit on a reduced scale as compared to yesteryears) so long as hunter-killer missions remain a reality of irregular warfare.

The analysis presented is on technical facts. The same does not account for the attitude of ‘couldn’t care less’ by the GCS operator or the tendency to ‘let go’ with a view to ‘take them all’ ( vehicles in convoy make ‘sweet targets’). Unfortunately such an attitude is seen to be quite prevalent among the GCS operators. Such intangibles of human attitude and behavior, though, well known to an informed reader, do not obviously lend themselves to any techno-analysis.

This question of collateral damage as enumerated above is a huge negative issue bringing into question the claim to precision and surgicality in the armed UAS/drone operations. Experts feel that in find-fix-finish type of hunter killer missions using armed UAS, collateral damage creates more militants than it eliminates. It is from here that the felt need for a manned and unmanned capability in joint missions arises, where the brute blindness of the UAS is aimed to be combined with the intellect and decision-making capability of a human pilot.

2 thoughts on “Why Drone Collaterals are Inevitable?”