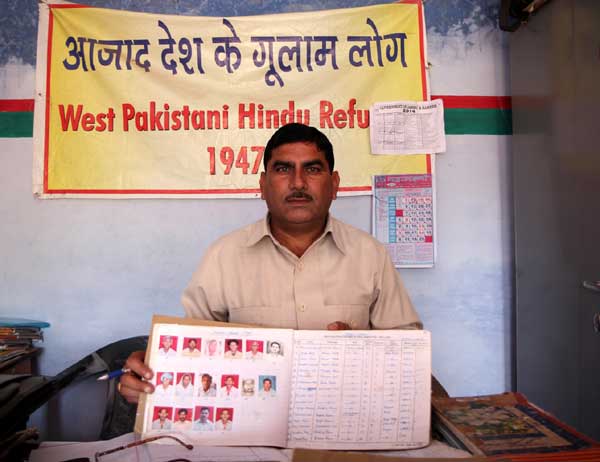 The separatist leadership of Kashmir Valley called for protests because of the State Government’s decision to issue domicile certificates to West Pakistan Refugees (WPR) who have been denied citizenship rights in J&K for over six decades.

Who are West Pakistan Refugees? They are mostly Hindus and Sikhs (app 70% Scheduled Castes, 10% OBC, 10% Sikh, 10% others) who crossed over to J&K during partition because they lived in areas that were close to Jammu and part of undivided Punjab.

What is the status of WPR today?  They –

Are citizens of India but not Permanent Residents of Jammu and Kashmir.

Their status is best described in this pic ‘Azaad desh ke Gulam log‘.

Why are WPR in this position?

These refugees are in this pitiable state because of Article 35A introduced by the Constitution (Application to Jammu & Kashmir) Order of May 1954. Armed with the provisions of Article 35A, provisions were sanctified in the J&K State Constitution in November 1956, with five sections therein dealing with the entity called ‘Permanent Residents’

Who is a Permanent Resident? “Section 6 of the State’s Constitution reads –

1.   Every person who is, or deemed to be, a citizen of India under the provisions of the  Constitution of India shall be a permanent resident of the State, if on the 14/5/1954:

2.  Any person who, before 14/5/1954, was a State Subject of Class I or II and who having migrated after the 1/3/1947, to the territory now included in Pakistan returns to the State under a permit for resettlement in the State or for permanent return issued by or under the authority of any law made by the State Legislature shall on return be a permanent resident of the State.”

These definitions came into being because during the rule of Maharaja Pratap Singh (1885-1925) there was a huge outcry due to appointment of large number of western educated men in Kashmir and to prevent rich neighbours from Punjab and other states buy property in the State. The agitation was so strong that the Maharaja was forced to issue an order that ‘State Subjects’ would be preferred to outsiders in cases of Government employment hence the definition of State Subject in 1927.

Thus, sections of the State’s Constitution contain provisions which allow only ‘Permanent Residents’ to be registered as voters in the State Assembly.

In the monarchial system of governance prevalent then, the Maharaja of J&K may have justifiably disregarded today’s norms of democratic equality in order to offer special treatment to certain subjects in order to protect them from being economically exploited by their well-to-do neighbours. Are these laws defensible on the ground of equality in a sovereign democratic republic like India or on the ground of preventing some imaginary economic exploitation in a State i.e. an integral part of India? It is also not the case that the poverty levels in J&K are higher than other parts of India, they are actually much lower.

So what has the State Government proposed in 2016? It shall issue a document certifying proof of identity. This would enable the refugees to get Central Government jobs.

Yet Jammu and Kashmir Liberation Front Chairman Muhammad Yasin Malik said, “A deliberate attempt is being made to change J&K’s demography by issuing domicile certificates to West Pakistan refugees”.

Did the demography change! when –

The introduction of Roshni Scheme (Vesting of Ownership Rights to Occupants of State Land Act 2001) first by Farooq Abdullah led Government and then by Ghulam Nabi Azad led Cong-PDP Govt was also alleged to be a deliberate attempt by the government to change the demographics of Jammu. Under this scheme, thousands of kanals of land were given to the illegal occupants of the State land. 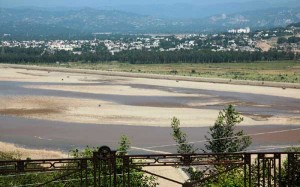 During a 2016 visit to Ladakh, many Ladakhis complained to this author about the increasing population of Kashmiri Muslims in the region.

Not a word by separatists and National Conference/Congress/PDP on consistent efforts by Kashmiris to change demographics of Jammu region yet issue of identity cards to WPR has become the subject of protests.

Let us look at Malik’s charge of demographic changes by reviewing the State’s population by religion for the period 1951 to 2011.

Table-1: Population by Religion (Nos. in thousands). Note: There is no Census data for 1951 and 1991. The 1951 and 1991 data in the book@ are only interpolated figures between actual census values before and after

From the table it is clear that the % of Muslim population in the state has consistently been around 68%.

Assuming that each WPR family has six members we are talking of about 1.2 lakh people becoming permanent residents. Will this change demographics significantly?

Instead of giving importance to baseless protests, the NC/Congress/PDP must explain the unusual increase in number of voters in Kashmir Valley as brought out in table 2.

Table-2: Change in Demography vs. Change in Voters (Numbers in lakhs). Note: @In article Kashmir Valley is referred to as Kashmir, Jammu Region as Jammu, Ladakh Region as Ladakh.

This abnormal swing of Rs 5.67 lakhs in number of voters calls for a detailed investigation by the Central Election Commission.

This demographic bogey is a ploy by the separatists and political parties to deflect attention from their wrong doings, keep the Central Government under pressure and ensure that  WPR refugees continue to live in a state of backwardness and poverty. 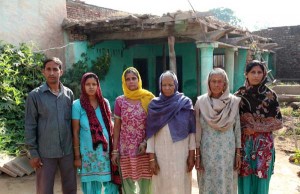 West Pakistan Refugees in a village near Jammu. (October 2014)

What is the way forward?

Since this amendment requires a two-third majority of those present and voting in the Assembly, it is unlikely any State Government will initiate such an amendment. This would require a strong leader at the Centre to make a financially dependent State government realize the futility of such outdated provisions.

For far too long have the State and Central governments succumbed to pressure tactics and violence unleashed by separatists and those who occupy just 15.4% of the State’s land area.

When will Delhi take back the VETO POWER on J&K that Nehru, in 1947, gifted the Sunni Muslims of Kashmir Valley?