Who feels envy to India’s relief work in Nepal? 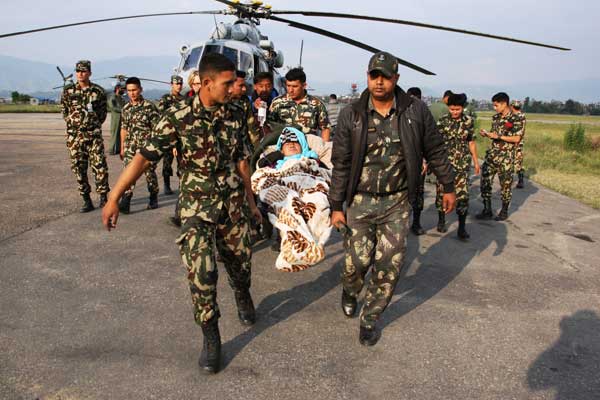 India has acted swiftly in Nepal as the country was hit by a deadly earthquake measuring 7.9 on the Richter’s scale. The decision at the political and diplomatic levels to extend a humanitarian help was quick and responded well by the armed forces. The first transport aircraft of the Indian Air Force brought many stressed-out Indians back to their homeland in no time. IAF launched a mammoth humanitarian assistance operation pressing C-17 Globe Master, C-130J Super Hercules, IL-76, Mi-17 choppers and Advanced Light Helicopters into service.

The Indians reacted to the tragedy as if it had struck in their own country and left no stone unturned to ensure speedy aid to thousands of stranded Nepalese.

The Indian Army has established mobile hospitals, sent engineer task forces and special teams with sophisticated equipment to bring normalcy to the ravaged country. The Army was quick and reached far flung areas providing much needed succor to thousands of grieving victims in the aftermath of the calamity. In fact, the Indian Army was the first relief agency to have reached the epicenter of the earthquake- Barpak.

The Indians reacted to the tragedy as if it had struck in their own country and left no stone unturned to ensure speedy aid to thousands of stranded Nepalese. The Indian response and relief work was recognized, noticed and discussed internationally.

Days before Nepal’s earthquake, Indian Navy won global praise for its valiant and extremely accurate rescue of nearly 4000 nationals from Yemen braving bombs by Shiite Houthi fighters. Huffington Post wrote “India emerges hero of massive Yemen rescue operation.” The United States, France and Germany also sought India’s help to move their citizens out of Yemen. India has shown that it has effectively grown as a potent nation to carry out complex disaster relief missions within and outside the country.

The synergy among India’s political, diplomatic, intelligence and forces’ levels during these two rescue operations has indeed been refreshing. But the sense of unease and discomfort over India’s relief assistance was evident in certain sections of Nepal when some IAF planes were disallowed to land at Kathmandu airport. The IAF planes even had to return to Delhi without delivering the relief material after hovering over Nepali airspace. The immediate reason given to journalists was technical problem with Air Traffic Control (ATC) due to excessive traffic at the airport. However, India later sent an official to sort out the problems.

There has certainly been a lot of unease among India’s opponents with the way political leadership and security forces have, of late, reacted in international crisis situations, worked in tandem and earned admiration.

Then few news stories appear slowly in certain sections of Nepali media criticizing the Indians and forcing all of us to think whether the press, in a country severely traumatized by the quake, can really criticize a friendly nation or there is a ‘different plot’ to it altogether. Who feels envy to India’s relief work in Nepal, after all?

There has certainly been a lot of unease among India’s opponents with the way political leadership and security forces have, of late, reacted in international crisis situations, worked in tandem and earned admiration. The relief and rescue diplomacy by Indians have presented the country and the security forces in good light. Obviously, certain foreign powers seem to have been profoundly upset with the global appreciation of Indians particularly after Indian Navy’s relief operation in Yemen. It is not difficult to understand who has problems with the Indian contribution. At an all party meeting called by Nepal Prime Minister Sushil Koirala three senior communist leaders including UCPN (Maoist) Chairman Pushpa Kamal Dahal, CPN (Maoists) leader Mohan Baidya and Narayan Man Bijukchhe of Majdoor Kisan Party said that in the name of relief distribution Nepal’s national security was under threat by some foreign powers.

Dahal, Baidhya and Bijukchhe told Koirala that “India was posing serious threat to national security and its activities should be contained,” Annapura Post daily reported. Ignoring immense help extended by India, UCPN (Maoist) Chairman Dahal reportedly said in this meeting that the “activities of the Indian forces are not helpful in relief distribution”- touching new heights of ungratefulness.

CPN (Maoists) leader Mohan Baidhya also said to Prime Minister Sushil Koirala that “Indian intervention would hamper Nepal’s relations with China.”  The Indians, though, made it amply clear that their teams have only been working in accordance with the instructions of the Nepal government. The suggestions or rather allegations made by Nepal’s communist leaders in the all party meeting echoed their political and ideological compulsion.

The elite Left, also active in the Indian media, was somehow uncomfortable with the appreciation and began asking why only India’s rescue efforts were admired.

On the very first day of earthquake, when IAF transport planes carrying Indians landed at New Delhi’s Palam technical airport, panic-stricken citizens thanked the speedy response of the security forces and some evacuees even expressed gratitude to Prime Minister Narendra Modi while interacting with defence correspondents. The elite Left, also active in the Indian media, was somehow uncomfortable with the appreciation and began asking why only India’s rescue efforts were admired. Soon sections of many neo-intellectuals realized the immediate need to discredit the government and the forces by drawing attention to rescue efforts of other agencies working in Nepal. The growing unease of the progressive-lot was also reflected on social media.

One such individual known to me researched and came up with a detailed list of agencies active in Nepal relief operation to write post on Facebook. The message of the post, which may seem needless, illogical and perplexing to many meaningful readers, being- India is not the only country extending help to Nepal. As the information platforms of security forces and the government have been booming with regular updates and pictures on quake relief operation, one well-known Hindi television journalist writes- ‘India is more worried about projection of its image’. He complains ‘why the government spokespersons tweeting details of the help extended to Nepal’- fully reflecting the ‘unease’ I have mentioned earlier.

While the unease in rival countries over fabulous humanitarian relief mission by India is understandable, the pattern within the country is disturbing and unfortunate. Should personal ideologies of individuals and political parties blind us to the extent that we ignore India’s strategic interests and become so irresponsible and go on ridiculing the tireless efforts put in by our soldiers? Tell me if it happens anywhere.

6 thoughts on “Who feels envy to India’s relief work in Nepal?”