Whither Jointmanship in India? 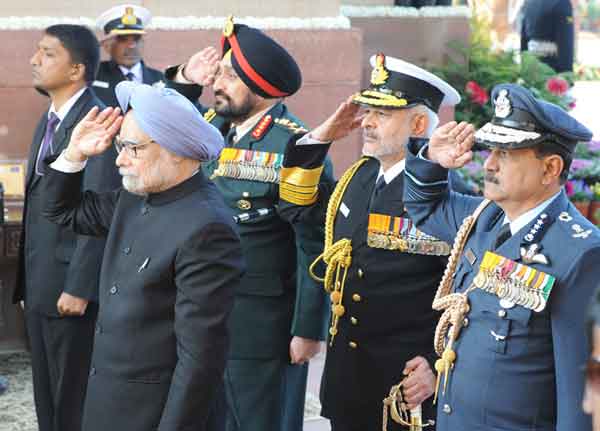 ‘Jointmanship’ in the history of warfare reached its maturity in World War II, especially during Operation Overlord involving landing by the allied forces on the beaches of Normandy. The other example of effective ‘jointmanship’ was the landing at Inchon by UN forces during the Korean War. The lessons of the Vietnam War inspired a change in the functioning of the command and control structure of the US military and led to the new statute called “The Goldwater-Nichols Act” that fostered better ‘jointmanship’ among the different wings of the US armed forces.

For decades military strategists the world over have emphasized the criticality of jointmanship in the prosecution of war. It is common knowledge that Revolution in Military Affairs (RMA) as also other modern concepts such as Cyber Warfare, Information Warfare and Network-Centric Warfare constitute the key to battlefield dominance and military superiority. RMA pre-supposes total tri-service integration in thought, word and action. The character of future battle space environment, therefore, makes it imperative for the armed forces to fight an integrated battle. In the Indian context, the concept of ‘jointmanship’ envisages the conduct of air-land, air-maritime and tri-service campaigns with a common military strategy in pursuance of national security objectives.

Despite claims, true integration has eluded the Indian military…

‘Jointmanship’ in the history of warfare reached its maturity in World War II, especially during Operation Overlord involving landing by the allied forces on the beaches of Normandy. The other example of effective ‘jointmanship’ was the landing at Inchon by UN forces during the Korean War. The lessons of the Vietnam War inspired a change in the functioning of the command and control structure of the US military and led to the new statute called “The Goldwater-Nichols Act” that fostered better ‘jointmanship’ among the different wings of the US armed forces.

Operation Urgent Fury in Grenada, though a prime example of failure of ‘jointmanship’, was successful only due to the bold action by the US forces. It was planned with virtually no advance warning and executed by diverse units with no opportunity to train jointly before the operation began. The Operation suffered from shortcomings that cost lives. Intelligence was sketchy and communications were often unreliable, particularly in coordinating air attacks and naval gunfire with ground operations. Operations Desert Fox and Desert Storm in Iraq are perfect examples of how all elements, land, air and sea, integrated completely and achieved stupendous success.

In Operation Desert Storm, air power was employed to deliver shock and awe, decimating the Iraqi Air Force and Air Defence to enable the land forces to subdue the Iraqi Army with ease. The Arab-Israeli Wars also are unique examples of ‘jointmanship’, specifically for the Israelis as ‘jointmanship’ is both essential for their survival and as an article of faith, which underscored its success in war.

Closer home, it was in the war with Pakistan in 1971, that the Indian armed forces experienced a modest degree of ‘jointmanship’. During the attack on the harbours at Karachi and Chittagong, both the Indian Air Force (IAF) and the Indian Navy attacked in concert with devastating effect. The heliborne operations on December 09, 1971, referred to as the “Meghna Heli Bridge” and the Para landings at Tangail the following day during the advance to Dacca, are good examples of ‘jointmanship’. Thereafter, till the Kargil War in 1999, there was not much jointmanship visible in the Indian armed forces. Experience in the Kargil War revealed the need for better jointmanship in planning, training and execution of military operations. Since then, as a follow up to the Kargil Report by K Subramanyam, the Integrated Defence Staff (IDS) was formed; a Joint Services Doctrine was drafted as also Andaman Nicobar Command and the Strategic Forces Command, both joint commands, were established. However, owing to a number of reasons, political and otherwise, the post of Chief of Defence Staff (CDS), the principal advisor to the Raksha Mantri, is yet to become a reality.

How then can true jointmanship amongst the three services be realised? The solution lies in the establishment of a proper command and control structure, a joint approach towards prioritisation in budgeting and planning, understanding the importance of domain expertise, revamp of joint training and finally, appropriate Human Resource Development (HRD).

The strength of the Indian Army is around ten times that of the IAF and twenty times that of the Indian Navy. The apprehensions of the IAF and the Navy of being swamped by the Army and the need to preserve their identity, needs to be addressed. At the same time, there is a requirement for a single defence services advisor who will represent the views and collective interest of the three services in an unbiased manner to the government in matters pertaining to planning force levels, resource allocation and budgeting. The appointment of the CDS, the first serving five-star defence services officer, is an inescapable necessity and ought to be considered by the government on high priority.

‘Jointmanship’ is ultimately about parity amongst the services with regard to effect and not size alone. Hence, to address the concerns of the smaller services, the first CDS could be appointed either from the IAF or the Indian Navy and subsequently, in rotation representing all three services. A fixed tenure of three years irrespective of the retirement age for the CDS and also that of the three Service Chiefs could be introduced to ensure stability of tenure. The CDS should have overriding powers to decide on the prioritisation in budgeting of plans and projects for the three services.

The next step would be for the three services to set up six Joint Services Commands i.e. in the Western, Northern, Central, Eastern, Southern and South-Western sectors of the country. The ideal situation would be to have the Command Headquarters (HQ) of the three services collocated. This is a difficult proposition, as separate infrastructure for both official and domestic accommodation for each of the three services’ Command HQ already exists on the ground. Hence, as an alternative, there should be a merger of the land, air and naval areas of responsibility and where necessary, fresh boundaries delineated, so that the Command HQ of each service has the same area of responsibility.

Following this, the Joint Forces Commander (JFC) be appointed to head each of the Joint Services Command. To ensure equitable representation, the Northern and Eastern Commands be headed by the Army, the Southern and the South Western Command by the Navy, the Western and Central Command by the IAF. This will ensure equitable distribution as each service will head two Joint Commands. A critical aspect of these changes would be the need for an arbitrator to resolve issues between JFCs relating to force levels and other concerns. The CDS would be ideally suited for this responsibility. The role of the three Service Chiefs will then become that of Chiefs of Staff who will formulate their individual service plans and training programs as well as set up their respective maintenance infrastructure. This is where this template may not find favour with one or the other stakeholder. The government may not like to give such wide ranging powers of both operational and budgetary control over the three services to a single entity.

The concept of a one-man Election Commission was not acceptable to the government and the Comptroller and Auditor General (CAG) may suffer the same fate. The bureaucracy in the Ministry of Defence (MoD) may have their own apprehensions about the appointment of CDS, a man in uniform having direct access to the Raksha Mantri overriding the Defence Secretary. The three Service Chiefs too, in all likelihood, would vehemently oppose the proposal as the appointment of a CDS would whittle down their operational powers. Perhaps, what would be more easily acceptable would be to have function-specific Joint Force Commanders heading Special Forces, Aerospace and Cyber Warfare. This concept was spoken about by the present Chief of the Air Staff in an interview recently.

Keeping the operational control aspect of the CDS and the JFC aside, in the present circumstances, the immediate task for the CDS and his staff if appointed, would be to coordinate plans and budgeting for the three Services. Modern battle space would be increasingly affected by resource constraints and budgetary pressures, given the high costs of new technologies and modern military equipment. These concerns would need to be addressed during peacetime. Based on the military strategy, which would be an important component of national security strategy, a long-term and sustained development of the armed forces would be necessary.

Based on the government’s objectives spelt out for the military, the CDS should be tasked along with the three Service Chiefs to work out the requirement of manpower and the weapon systems that the three Services would need for their tasks. Take the case of protecting the sea lanes of communication from the Gulf of Aden to the Strait of Malacca, the mix of ships, the number of carriers and supporting vessels, escorts, ASW capability, missile frigates and minesweepers need to be determined, along with the requisite air support for maritime reconnaissance and attack. A similar exercise for the defence of land borders, the aerospace security requirement, need for reconnaissance and surveillance systems would also need to be worked out. From the joint plans would be derived the individual service plans and estimate of funds required to build up the required force levels. The question of the numbers and types of weapons systems for the IAF, the Indian Navy and the Indian Army would need to be worked out with appropriate cost-benefit analysis. Procurement of common systems should be done on high priority and early so that the country benefits from volumes of items purchased and in setting up infrastructure for maintenance and training to obviate the possibility of duplication and effect savings in manpower and funds.

2 thoughts on “Whither Jointmanship in India?”