When China Rules the World

Options for the Indian Military

Apart from nuclear alternatives – that have not been considered as they are beyond the scope of this hypothesis, options for the Indian military are enumerated below:

Tie up with the US as a strategic partner and develop military and economic relations with it. An Indo-US alliance could tilt the balance of power in South East Asia and the sub-continent in favour of the US and leave it relatively free to maintain its strategic role in South East Asia and other parts of the world. What India needs to do is to get the latest technology from the US which it is willing to give, preferably via Israel, in the fields of satellites and drones for information and intelligence gathering. This would preclude a surprise attack by China.

India would also like advanced electronics technology in missiles and weapon systems for use by the Army, Navy and the Air Force. In such a scenario, India need not view the rise of the Chinese Navy with alarm. Basically China wants to protect its sea-routes for oil and vitally needed supplies from the Persian Gulf and Africa. An Indian view that China would like to encircle India need not also be taken too seriously. With the Indian peninsula jutting into the Indian Ocean and island territories of the Andaman and Nicobar dominating the Strait of Malacca, Indian forces cannot be bypassed and isolated. Yet India will have to get used to the PLA Navy sailing on the high seas in the Pacific and Indian Oceans.

However, with or without US support, India need not challenge China’s dominance in the South China Sea but help to keep the sea lanes open as per international laws in coordination with Japan, US and ASEAN and China. This will suffice for its trade with Japan, US and ASEAN. With this end in view, India would need to have base facilities at Cam Ranh Bay in Vietnam. Thus, India could play the role of a key swing state along with Russia. It is not and will not become superpower in the foreseeable future.

Eventually, in the face of reality, India cannot, should not and must not follow a policy of confrontation with China, however much the US would like us to follow. China is too big, geographically too close, militarily too strong and economically too far ahead of India. Today, China has a $11 trillion economy as against India’s $2 trillion. Moreover, the US being a global superpower, its interests and priorities can change, much to our chagrin like in Afghanistan and Pakistan.

India must not ally too strongly with the US. India has to develop its own modus vivendi with China, buy time to catch up economically and militarily. Both Japan and the US can help India but will do so without hurting their own economic interests in China. Just as the US need not choose between its Asian alliances and a constructive relationship with China, India need not choose between a closer partnership with the US and improved ties with China. India needs to manage relations with China but avoid the traps for rivalry/confrontation and seek a stable and peaceful order in which China is nudged into a peaceful and balanced world order.

On the border aspects, India needs to develop its border logistics and infrastructure especially around 30 to 50 miles depth at an accelerated rate. It is vital for India to enhance our capabilities especially around our Advanced Landing Grounds (ALGs), lengthen, strengthen, make them all-weather and construct new ones both in Arunachal Pradesh and in Ladakh.

In addition, these destinations need to be developed as major tourist centres to allow for revenue generation and enhanced infrastructure development/population influx to strengthen our claims. The author has flown extensively over border regions both in the West and East and can authoritatively state that both development and military gains can be achieved at lower cost. The areas present one of the best tourist attractions in terms of ecosystems, animal habitats, flora and fauna worldwide.

One of India’s counter attack thrust axis needs to be along the central axis (Uttaranchal) where the lines of communication are shortest for main Central Army Formations and better located/suited, IAF airfields at Bareilly, Lucknow and Allahabad.

The Central Axis is also better suited logistically for switching of forces from the Western front. On the other hand, Chinese forces would face longer LOC and relatively less advantageous operations from their high altitude airfields. From here, India can best take advantage of Tibetan resistance to Chinese occupation and earmark forces for clandestine operations.

Another flashpoint is the Chumbi valley. Strategically located at the intersection of India (Sikkim), Bhutan and China (Tibet), it is a dagger pointing into the heart of India/the Chicken’s Neck which connects India to North East India. Two main passes between India and China, the Nathu La and Jelep La open up here.

This, easiest route to Tibet via the Chumbi valley was followed by British explorer Sir Francis Edward Younghusband to establish a consulate in Tibet in 1904. Today, this area assumes strategic importance and could be the scene of raging battles between the Indian Army and the PLA. Generally speaking, the terrain at places the valley is very narrow thus making it unsuitable for operations of large Chinese forces, logistics and overall force deployments favour India and the LOC may well be shifted towards its Northern end. The location of the newly raised Strike Corps based in Panagarh could play a pivotal role.

China would not like to attack in strength in the Ladakh sector as it has already achieved its objective of road linkage to Kashgar in Xinjiang. Moreover, there are large well-entrenched, acclimatised and trained Indian forces in and around Leh. In the Central Sector, the area in dispute is small, the terrain difficult and unfavorable to China. In the Sikkim/Chumbi Valley, the terrain and troop deployment is in favour of India.

Although large forces are concentrated here, the major thrust axis is not likely to be in this area. In the Tawang Sector which the Chinese claim, the forces are well entrenched and matched. However, there could be fierce encounters around Tawang. It is the area from Upper Subansari to Kibutu that is likely to be the Chinese main thrust axis. There is a lack of infrastructure on the Indian side with no major rail or road head. 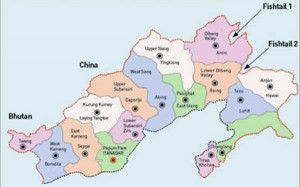 On the other hand, Chinese forces have excellent logistics support close to the border. As such, a large asymmetry exists between the two forces. Recent Indian plans for better logistics with a road network and additional troop deployment, are likely to be too little, too late. This is an ideal area where the Chinese can concentrate forces and launch surprise maneuvering attacks bypassing thinly held Indian pickets, penetrating 30 to 50 miles, encircling forward posts and re-entering China before Indian counterattacks.

Last but not the least, this is the so-called Outer Tibet area which the Chinese claim to be their own. High conflict areas include the 100 sq. km. Asaphila region in Upper Subansiri and Fish Tail I and II in Chaglagam, areas as large as Sikkim.

Finally, India needs to bolster its space programme, especially satellite and drone intelligence gathering to prevent a surprise attack and long range, (over 5,000 kilometres) missiles as a strategic deterrent. Successful implementation of a three to five year defence plans to enhance our logistics, infrastructure and force levels, would go a long way in buttressing India’s border position/perception and coercing China to negotiate on the basis of the “watershed “principle.

Ultimately, India’s strategic partnership with middle powers like Japan, Australia, Indonesia and Vietnam will get greater domestic acceptance than an Asian strategy that relies solely on US commitment to maintain balance of power in the region. This will also counter China`s claims that regional security cooperation is merely a part of US and Indian efforts to contain China. Building multiple power coalitions as a complement to engaging China and deepening the strategic partnership with the US will strengthen India’s independent role in the security of Asia.

7 thoughts on “When China Rules the World”