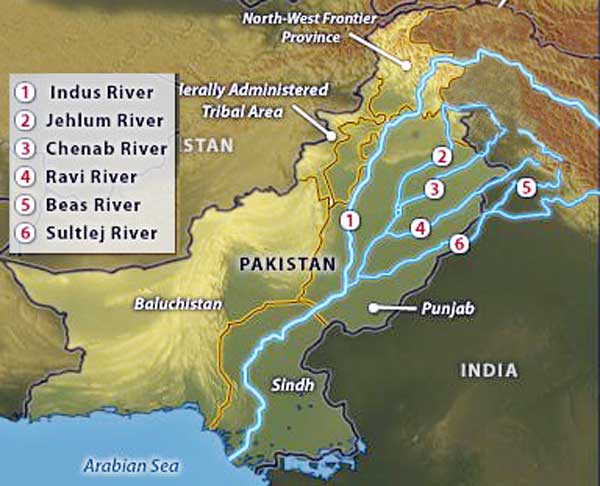 There appears to be a growing perception of Indian wrongdoing on water in Pakistani minds. While India–Pakistan relations are not on even keel, another canard can only add to the already strained situation. That the issue needs to be understood objectively and shorn of the hype, on both sides of the border, is self-evident.

in 1960, with the signing of the Indus Waters Treaty wherein the three western rivers Indus, Jhelum and Chenab were awarded to Pakistan and the three eastern rivers Ravi, Beas and Sutlej to India. This division provided Pakistan with 56 percent of the catchment area and India with 31 percent.

It is an inexorable fact that there is a sense of an imminent (or already present) water crisis in both countries. The per capita availability of water has declined; groundwater is under stress through over-exploitation; river flows are diminishing, and some rivers are so polluted as to be no more than sewers; and water supply in cities is intermittent and unreliable. However, the perception of a crisis and the recent voices in Pakistan towards attribution of that crisis to Indian wrongdoing is a new development that needs to be viewed with concern and saner voices need to come into play.

But first, let us retrace the problem in its historical context. For centuries, the Indus River Basin constituted a unified geography spread over almost 1.2 million square kilometres. The acrimony of partition of the subcontinent led to East Punjab stopping the flow of water to West Punjab, in 1948, stating absolute sovereignty. Flows were resumed when Pakistan paid India for administrative costs. The Inter-Dominion Accord of 1948 was a temporary agreement that required India to release sufficient water to Pakistan in return for annual payments. However, water continued to be a source of contention within the region.

The situation was finally resolved, in 1960, with the signing of the Indus Waters Treaty wherein the three western rivers Indus, Jhelum and Chenab were awarded to Pakistan and the three eastern rivers Ravi, Beas and Sutlej to India. This division provided Pakistan with 56 percent of the catchment area and India with 31 percent. The authors of the Treaty had hoped that the division of the Indus Water Basin would eventually lead to the unity of people in Pakistan and India. Sixty years later, they seem to be proved wrong. In fact, the concern over the distribution of the Indus catchment area raises the basic question whether short term divisive solutions can be sustained in the long run. Perhaps water would not have been a central issue had it been utilised efficiently over the last half century in both countries. Unfortunately, that has not been the case. Nevertheless, war over water is not strategically rational, hydrographically effective, nor economically viable.

The recent monsoon floods that have devastated Pakistan place it on the verge of a critical shortage of fresh water. The monsoon floods have obliterated countless canals, diversion weirs and huge swathes of cropland. And water scarcity is not only a worry for Pakistan’s population—it is unlikely that Pakistani food production will long keep pace with the growing population. A widespread water shortage in Pakistan would further destabilize the fractious country.

Pakistan can be divided into five physiographic regions:

The River Indus and its tributaries are the main source of water supply in Pakistan. Dams and barrages have been built on the Indus and its tributaries to store water. Large dams at Tarbela and Mangla are multipurpose projects storing water, irrigating lands and also generating hydro electricity. Small dams like those at Khanpur, Rawal and Hub supply water for agriculture, industrial and domestic use and act as a reservoir as well. Barrages supply water for irrigation as well as industrial and domestic use.

Irrigation is the man-made supply of water to the land to encourage vegetation. In Pakistan, 75 percent of the agricultural land is under irrigation. The major water sources in Pakistan are rain water, ground water and rivers. The irrigation system of Pakistan is the largest integrated network in the world. There are 3 major storage reservoirs, 19 barrages, 12 inter-river link canals, 45 independent irrigation canal commands and over 122,268 watercourses. Perhaps no other area in the world can claim so many major rivers flowing in close proximity of each other. In that sense Pakistan is unique.

The total population is 141 million (1995), of which 65 percent is rural. The average population density is 177 inhabitants per square kilometre, but the population is mainly concentrated in the Indus plain. The average annual population growth is estimated at about 3.2 percent. In 1992, agriculture accounted for 26 percent of the gross domestic product (GDP) and provided employment to 48 percent of the labour force. It supplies most of the country’s food, but is also the source of raw materials for major domestic industries, particularly for cotton products which account for 80 percent of export earnings.

Under the treaty, India is allowed to store 3.6 MAF of water of the western rivers, but it has not built any such facility so far, allowing unimpeded flows into Pakistan.

The Indus River, originating at 17,000 feet above sea level in Tibet, is 3,180 kilometres long and traverses past the Himalayas in Jammu and Kashmir through Pakistan before emptying into the Arabian Sea. The river has a total drainage area exceeding 1,165,000 square kilometres. The river’s estimated annual flow stands at around 207 cubic kilometres. The flow of the Indus fluctuates seasonally, with melting of Himalayan glaciers accounting for almost 90 percent of the water in the Upper Indus River Basin. Although most of the Indus Basin lies in a zone of deficient rainfall (< 10 inches annually), abundant flow is present during the monsoon season (July – September), which accounts for 51 percent of the annual flow. Nearly 10 percent of the rainfall is lost by evaporation and nearly 41 MAF is lost by seepage from unlined canals, which results in water logging, rendering the land useless for agriculture. 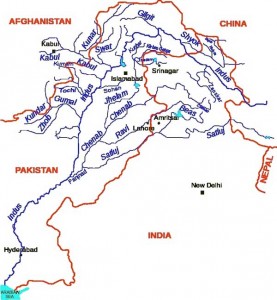 56 percent of the total drainage area of the Indus basin lies in Pakistan, and the remainder in China, Afghanistan, and India. Because of the importance of irrigation in the Indus plain, the water balance of the Indus basin has been carefully studied. The mean annual inflow into Pakistan through the western rivers (the Indus, including the Kabul tributary, Jhelum and Chenab) amounted to 170.27 cubic kilometres per year in 1995. The mean annual natural inflow into India through the eastern rivers (Ravi, Beas, and Sutlej) is estimated at 11.1 cubic kilometers per year, but this is reserved for India, according to the 1960 Indus Water Treaty.

As an upper riparian locked in a politically adversarial relationship with Pakistan, India had little or no incentive to look at the Indus basin as an integrated water system.

The 4,000 year-old Indus civilization has its roots in irrigated agriculture. The abandoned creeks of the meandering river, inundated during the flood season, served as the irrigation channels of the ancient systems. The first controlled all-year irrigation began in 1859 with the completion of the Upper Bari Doab Canal emanating from the Madhopur head works on the Ravi River. The Sukkur barrage, completed in 1932, is the first modern hydraulic structure on the downstream Indus River.

Though inter-provincial disputes over water sharing existed in this region before 1947, the partition of the subcontinent introduced a further complexity. It was easy for Radcliffe to draw a line on a map and divide the land of British India but people and water were harder to partition. The mass migration and bloodshed it triggered is well-known but the rupture to the region’s hydrological system was just as traumatic. The rivers which irrigated the new nation of Pakistan had their origins in India. As an upper riparian locked in a politically adversarial relationship with Pakistan, India had little or no incentive to look at the Indus basin as an integrated water system. The early years of independence saw bitter disputes over the usage of the water. Geography and terrain meant that the Indus itself could not be harnessed on the Indian side but small-scale diversions on the tributaries generated considerable tension with Pakistan.

In 1952, the World Bank put forward a proposal for the equitable distribution of the water resources of the Indus Waters Basin. The proposal had three essential features:

The Indus Waters Treaty (IWT) is regarded as one of the few successful settlements of a trans-boundary water basin conflict. It took eight years of negotiations before agreement was reached and was signed on 19 September 1960, with the World Bank’s mediation. The IWT partitioned the six rivers of the Indus basin on a crudely longitudinal basis. India was given exclusive use of the waters of the three eastern tributaries, Ravi, Beas and Sutlej, and the right to “non-consumptive” use of the western rivers, Indus, Jhelum and Chenab. India renounced its right to block or divert the flows of the ‘western’ rivers and agreed to confine itself to run-of-the-river hydroelectric projects and drawing of irrigation water for a specified acreage of farm land. This partitioning was irrational from an ecological standpoint and led to both sides incurring considerable expense to develop canal infrastructures drawing on “their” allocated rivers to compensate for the non-use of the other side’s rivers.

To compensate Pakistan for the loss of the water of the eastern rivers, six friendly countries and the World Bank together with India provided funds for the construction of replacement works in Pakistan. The World Bank and other international agencies provided $870 million to Pakistan and $200 million to India to defray infrastructure costs. A transition period till 31 March 1970 was allowed so that Pakistan could build its link canal system to divert water from its Western Rivers to Eastern Rivers. It was incumbent on both sides to avoid building any man made structure which could change the natural course of water; and both sides were responsible for maintaining the Indus basin by adopting the best practices available. India is also bound to inform Pakistan about the design of any work on the Western rivers. Under the treaty, India is allowed to store 3.6 MAF of water of the western rivers, but it has not built any such facility so far, allowing unimpeded flows into Pakistan.

8 thoughts on “Water Availability in Pakistan”