“We have defeated the US forces, with the help of God,” a Taliban video released to the al-Jazeera TV network showed a leader shouting out gleefully.

The timing of this audacious attack was not lost on any one. Gen Stanley Mc Chrystal had submitted his paper on the future military strategy in Afghanistan, bidding for 40,000 additional troops, adding to the 68,000 US troops already deployed in Afghanistan. One of the military strategies outlined by Gen Chrystal was to do away with isolated posts, and use the additional numbers so available to protect population centres from Taliban attacks. As if to reinforce this point, the Taliban had done just that – hit the US outposts in Kamdesh, giving a message, thereby, that the US military thinking is on the right lines!

Incidentally, the situation had a striking similarity to the Soviet predicament in the 1980’s, when it was forced to withdraw its isolated posts to prevent further damage. When this policy was implemented, the Afghan countryside gradually fell into Mujahideen hands, the highway and roads linking cities became unsafe and the communist government of President Babrak Karmal and his successor President Dr Najibullah started weakening. This scenario is now being replicated with ISAF forces pulling back to urban/populated centres to better defend themselves and the “population”. Co-incidentally, it was in Nuristan and Kunar that the Soviet Army suffered its first defeats, forcing them to withdraw to Jalalabad. 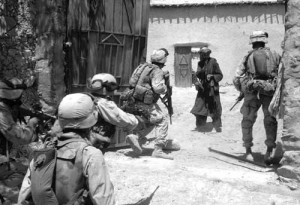 The Afghans have an eye to history, having fought invasion after invasion. The two military set-backs in Wanat and Kamdesh could well just be the ‘symbol’ of the turning of the tide in Afghanistan and is probably what the Taliban was suggesting to the world, by timing its attack at Kamdesh in Nuristan province, when the US and its allies were grappling with the situation, working out the right military strategy and how to resource the fight, more crucially, whether to ramp up the forces by another 40,000 troops, ironically bringing it at par with the total number of troops the Soviets had, when its downslide commenced!Another similarity related to President Obama, who like Nixon, has inherited a “thankless war”. Nixon elected to pull out and won the second term. Lyndon Johnson before Nixon did not and was not elected a second time. That the US has reached this dilemma on the eighth anniversary of its invasion of Afghanistan is owed to the well crafted strategy of the Taliban resistance in the intervening period.

The security situation in Afghanistan has deteriorated significantly in the last three years with the UN estimating that some 2100 civilians were killed in 2008, up 40 percent on the year before. For the year 2009, up to the period 01 Aug 09 the UN estimates of civilian casualties is 1500 killed. A total of 1700 ISAF troops have laid down their lives, which includes 900 US soldiers. About 80 US soldiers were killed in the month of October alone, the highest ever. Afghanistan’s precarious situation can be traced back to strategic errors made after the 2001 invasion. Very few troops, about 4,500 initially were deployed against a requirement of 25,000. This has led to the current stalemate when the US is, “losing in Afghanistan because it is not winning…. the Taliban are winning…. because they are not losing.”

“¦ the Pashtun stronghold of south, central and eastern Afghanistan, the Taliban is slowly but surely coalescing into a Pan Afghan outfit”¦

This situation of ‘winning because it is not losing’, is a win – win situation for the Taliban, as is the case with all insurgencies, which has time on its side. Whereas, for the Americans, the longer they remain embroiled, more the number of casualties, more unpopular the counter insurgency becomes, and more the pressure from the people on a democratic government. There cannot be a more telling comment or appraisal of the current Afghan résistance than the fact that for the first time in eight years, the Afghan Taliban are now a force to reckon with even in northern Afghanistan.

Strong as it was in the Pashtun stronghold of south, central and eastern Afghanistan, the Taliban is slowly but surely coalescing into a Pan Afghan outfit, always learning from its past mistakes, keeping the civilians on its side, tiding over ethnic, ideological, tribal feuds and loyalties, selling the idea of nationalism as a unifying force against “ foreign invaders and oppressors.” Initiating a slick propaganda war the Taliban talks about ‘occupation’, pointing out that foreign troops are killing Afghans, and highlights the civilian casualties in American air strikes, violation of local tradition, including house and personal searches, bad governance, corruption, and fraudulent elections.