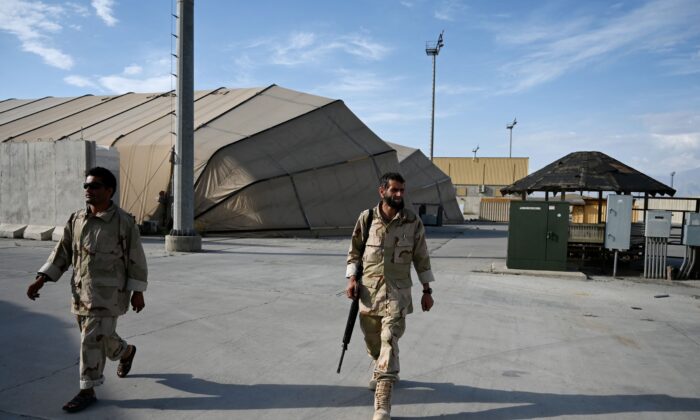 Afghan National Army (ANA) soldiers walk inside the Bagram US air base after all US and NATO troops left, some 43 miles north of Kabul on July 5, 2021. (Wakil Kohsar/AFP via Getty Images)

Former President Donald Trump recently expressed concern that the Chinese regime could gain control of Bagram Air Base in Afghanistan, adding that his administration would have maintained control of the airbase upon a U.S. withdrawal from the country.

Back in June, Chairman of the Joint Chiefs of Staff General Mark Milley told Congress that Bagram was neither tactically nor operationally necessary for the United States’ withdrawal from Afghanistan. The Biden administration pulled out all U.S. troops from Bagram in July, more than a month ahead of the widely-criticized chaotic pull-out from the country.  The base, which was once the center of U.S. counterterrorism operations in the country, is about an hours’ drive from Kabul.

Trump on Nov. 7 Fox News interview, said his administration would have maintained control of Bagram Air Base because of its strategic location.

“We would have kept Bagram because it’s next to China … and now China’s going to take over Bagram, in my opinion,” Trump told Fox News.

Dan Steiner, a retired U.S. Air Force colonel and global strategist, agreed with the former president, saying that its location close to China could have been valuable for the United States contending with the growing threat posed by the communist regime, including its expanding nuclear capabilities.

Using satellite imagery, recent reports detail the construction of three missile silo fields near the cities of Hami, Ordos, and Yumen in western China. The total number of long-range missile silos in China could now exceed 250.

“An earshot away from western China, there was clearly a strategic advantage to keeping Bagram Air Base,” Steiner said.

Retired Brigadier General Don Bolduc who served ten tours with the U.S. Army in Afghanistan between 2001 and 2013, similarly said that considering all threats from neigboring countries—China, Iran, and Pakistan—meant Bagram was strategically important.

With the United States out of the picture, the Chinese regime may want to keep it that way in Afghanistan.

“To prevent the United States from finding an excuse to return to Afghanistan to reoccupy an air base that is so strategically close to the Chinese regime’s nuclear weapons program,” Steiner said, “it’s not out of the question for the Chinese communists to want a footprint at this location sooner than later.”

The development of “a transportation hub” could be a perfect “dual-use scenario” for the Chinese regime to occupy the air base, Steiner said. There is precedent for this arrangement in South Asia: Pakistans’ Gwadar Port Authority is under the administrative control of the Maritime Secretary of Pakistan but operated by China Overseas Port Holding.

The idea of acquiring an air hub in a land-locked Afghanistan would be a “brilliant move on the part of Beijing,” according to Steiner. “It’s a very logical way for the Chinese to play chess, moving their piece into a square on the board that blocks the U.S. from moving back to the geographical location.”

To further an alliance between the Communist Chinese Party (CCP) and Taliban, Beijing could also use the threat of terrorism as a factor, he added.

“They could propose coming alongside the Taliban to confront the terrorist threat to the air hub as well as to western China, but at the end of the day, it’s just another means to get control of Bagram,” Steiner said.

While it may not be a Chinese military installation, per se, Steiner said it could easily be manned by members of the People’s Liberation Army (PLA). “And surely this fits into the [regime’s] playbook of having control of Bagram.”

The Chinese regime recognizes the logistical and economic benefits to taking control of Bagram Air Field, according to Steiner.

“Should the Chinese gain an air hub in Afghanistan, it could be justified as a transportation point for airlift,” he said. Business contractors or even members of the PLA could be moved in or out of the country, or valuable minerals could be moved out, for example.

In an August 2021 op-ed for the New York Times, Zhou Bo, who was a senior colonel in the PLA from 2003 to 2020, wrote that “With the U.S. withdrawal, Beijing can offer what Kabul needs most: political impartiality and economic investment.” He went on to comment about Afghanistan’s estimated $1 trillion in untapped mineral deposits, including industrial metals such as cobalt, copper, iron, and lithium.

In the case of lithium, the element is a key raw material for many batteries, including for electric cars. According to a report by the Institute for Energy Research, “China now dominates the world’s production of new generation batteries that are used in electric vehicles and most portable consumer electronics such as cell phones and laptops.”

Because there is such “big business” associated with lithium and other mineral deposits, Bolduc said Beijing has been optimistic about contracting business in Afghanistan for quite a long time, He said the Chinese regime will likely be able to take advantage of the “less sophisticated, less bureaucratic government” of the Taliban to acquire all of what it desires.

“All China wants are the resources to maintain their global exploits—and as long as they’re granted the opportunity to get those resources,” Bolduc said, “it’s very likely they’ll pay or say whatever is necessary to get them.”

Maintaining control of Bagram Air Field was equally important to Steiner and Bolduc, as it could be for the Chinese regime. Bolduc said that a minimal presence of the United States military could have continued to help bolster peace in Afghanistan and throughout the region, while also keeping the CCP at bay. “And why not use an area that’s been used for 20 years as the base of operation for maintaining a regional footprint?” he said.

During U.S. negotiations with the Taliban, Steiner said the United States should have attempted to “maintain a location, like Bagram—much like has been done in northern Syria and Iraq.”

This is not unusual, as hundreds of U.S. troops remain deployed around the world in the fight against global terror. Bolduc said, “This should have been pressed for during the negotiation process, because it’s really the only way the U.S. could have ensured that the Taliban doesn’t go back to their own ways and allow Afghanistan to become the terrorist safe haven it will become.”

While the United States could have taken “a hard line” on the matter,” Steiner said, “the Taliban could have simply said no—and that’s probably something we’ll never know about the negotiation process.”

is a Writer and Researcher of both Islamist and Chinese Threats.