Understanding the Violence in Valley! 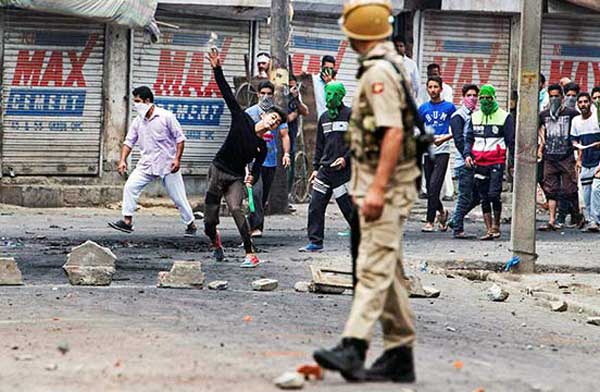 Insurgencies are like amoeba, constantly changing shape and size. What began as a territorial dispute between India and Pakistan in 1947 has, over time, undergone several metamorphoses. Initially it had socio-economic roots but later became part of a wider Islamic uprising masked by calls for ‘Azadi”. At present it is driven purely by a sense of outrage over impotence and revenge for security forces’ action against the militants.

…ever since the failure of an armed uprising, the domestic elements as well as Pakistan seem to have embarked upon a strategy of making Kashmir valley ungovernable.

Most analysts agree that the ‘insurgency’ in Kashmir began in 1988/89. But such is the close nexus between the proxy war by Pakistan and domestic unrest in Kashmir, that the two are virtually inseparable. The initial impetus was definitely provided by the happenings in Europe (fall of the Berlin Wall, disintegration of the USSR), but a long-term reason was the long cultivated myth of the ‘unique’ Kashmiri identity. This was due to the defensive reaction of the secular Indian State and its cynical exploitation by the West and Pakistan.

During the Cold War period, Kashmir could be used as a pressure point against a pro-Soviet Union India. The Afghan war against the Soviet occupation began winding down in the late 1980s. This was perceived as a victory for Islamist forces and the fighters freed from this war were directed towards Kashmir. Towards the early 1990s, Pakistan sought and got American support for its Kashmir venture as a sort of reward for its role in ousting the Soviet Union from Afghanistan. Insurgency in Kashmir was a virtual certainty in 1988/89.

Post 9/11 and the worldwide rise of various Islamist movements with its attendant Islamophobia in the West (though not in India) had its echo in Kashmir. Seldom does one come across a case of insurgency where so many factors came together in time and space.

A note of caution is warranted here while dealing with insurgency that has religious motivation. No amount of force or fear of death, destruction or deprivation can bring about a change of perception. The conflict is seen as one between God (and his true followers) and mere mortals. The only way out in these situations is to get the God or religion on your side.

Any attempt to concentrate excessively on the military aspect, as was the case in Vietnam can only lead to assured failure.

It has already been mentioned earlier that an insurgency may well have its roots in social, economic, political or psychological problems. Many times a revolt may start due to economic distress, as in the case of Mizoram in 1966, but later become a struggle for identity. It is well-nigh impossible to accurately assess the root cause of trouble. Thus peace-enforcing and peace making by addressing the root problem cannot be treated sequentially but must run in parallel. This is akin to a ‘broad front’ strategy of conventional war. Any attempt to concentrate excessively on the military aspect, as was the case in Vietnam can only lead to assured failure.

At any given time, in case of a long drawn out insurgency, the dominant cause may well be entirely different from what it was in the initial stage. A counter-insurgent has to be mindful of these subtle shifts and be sensitive to them. Accordingly the emphasis has to shift from economic to political or psychological as the case may be. It is this dynamic relationship between the cause and effect that make insurgency a much more difficult proposition than conventional conflict where the military element predominates.

In case of Kashmir, ever since the failure of an armed uprising, the domestic elements as well as Pakistan seem to have embarked upon a strategy of making Kashmir valley ungovernable. Despite sporadic attempts, India appears to have failed in creating a perception of no win in the minds of citizens of Kashmir valley and (certainly) their supporters in Pakistan. Many recent surveys have shown that Kashmiris have no desire to merge with Pakistan. An independent state of Jammu & Kashmir is their goal.

In any insurgency there exist three basic elements: leadership, organisation and ideology. These three elements and their importance differ from insurgency to insurgency.

Judging from Kashmiri separatists’ literature and propaganda, there seems to be no clear vision or acknowledgement of the problems of the viability of a landlocked state and the difficulties of gaining independence from two countries – a problem shared with many other ethnic groups like the Kurds, Chechens and Baluchis. The demand for autonomy also ignores the economic price that Kashmir may well have to pay for distancing from India, where the markets for Kashmir’s products are or its tourist inflows. There appears no effective leadership in Kashmir that can see this and convince the people. It appears that like Germany chose Nazism and suffered, Kashmiris are doomed to life of misery as they choose an Islamic model and independence that would certainly see the takeover of the state by Taliban like extremism.

In any insurgency there exist three basic elements: leadership, organisation and ideology. These three elements and their importance differ from insurgency to insurgency.

This is not a static relationship but is ever-changing. To counter an insurgency, one has to have a keen eye to spot the changes in the relationship. For instance, in case of Nagaland, it was the untiring leadership of Z. A. Phizowhich was instrumental in starting the revolt in Nagaland. Equally, over time, at least in the case of Nagaland, the organisation (Naga Federal Government) became the dominant factor in the insurgency. Despite Phizo’s long absence from Nagaland and later his demise, the Naga movement continued. In the case of Kashmir, after Sheikh Abdullah, the prime mover of the insurgency, there have been the various organisations and sustained support to the cause from Pakistan, which keeps the fires of unrest burning. If we look at the South African example, it becomes clear that the cause was uppermost and primary all through the anti- Apartheid struggle. It is indeed true that Nelson Mandela and his continued imprisonment fired the world’s imagination and his release became the cause celebre, but this was incidental to the larger picture.

The problem this poses to counter insurgents is that if the relative importance of the three facets is not correctly assessed, then one ends up on the losing side by living in the past. We seem to have foundered on this rock of uncertainty of the exact status of the inter-relationship between these three fundamental factors in Kashmir.

The very existence of Pakistan nearby as an Islamic State is sufficient to keep the separatist cause alive. The fact that Pakistan continues to provide help, support and sanctuary is an added reason, but even without that the cause would survive.

It is common wisdom that the counter insurgency must adopt a multi-pronged approach. This is true at the policy level in the sense that the war has to be fought on five fronts, namely economic, social, political, psychological and military. But at the strategy level as well, the approach has to be three-pronged, to aim at the cause, leadership and organisation. Weakening of only one or even two facets of the insurgency does not result in peace. In Kashmir as well there has been a multiplicity of bickering leaders, each with limited influence. The Army’s operations over the years have disrupted the organisations of the insurgents, yet the insurgency is far from over because the cause, basically secession based on religion, is alive and kicking.

The very existence of Pakistan nearby as an Islamic State is sufficient to keep the separatist cause alive. The fact that Pakistan continues to provide help, support and sanctuary is an added reason, but even without that the cause would survive.

This author was told an interesting incident in the 1980s when a Kashmiri told an Indian Army officer that while everything else in Kashmir or India was ok, he preferred Pakistani salt. In the Indian subcontinent salt is equated with loyalty. What the Kashmiri meant was that irrespective of the economic and other goodies that India may provide to Kashmir, his loyalty would be to Pakistan which he sees as a homeland for Indian Muslims. A well-known Indian Muslim reformer, the late Hamid Dalwai had a similar tale to narrate when he mentioned that a simple Shikara (a small boat) man told him that while he had everything else in India, but he must also care for the flag of Islam. The point that ought to be understood is that mere disruption of an organisation or the elimination or buying of leaders may not lead to success in counterinsurgency as long as the cause and ideology are not countered or neutralised. This brings home that neutralising rebel leadership and/or organisation with military might is not sufficient to win peace.

Given the nature of the complicated challenges in Kashmir, one hopes India has dedicated ‘Kashmir watchers’ or fulltime experts keeping an eye on the problem. Appointing interlocutors and parachuting them into Kashmir or leaving the serious thinking to bureaucrats (civil or military) who play musical chairs is a recipe for disaster. Hope we learn this crucial lesson from the current bout of violence in valley.

5 thoughts on “Understanding the Violence in Valley!”