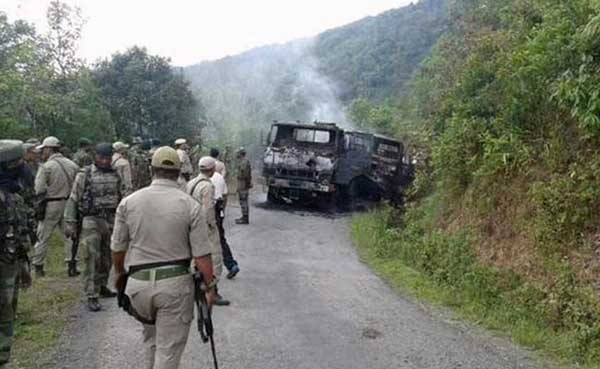 An Indian Army convoy carrying 46 soldiers was ambushed in Moltuk valley at Parolong in Chandel district of Manipur bordering Mayanmar at 0830 hours on June 04, 2015.

Eighteen soldiers of 6th Battalion The Dogra Regiment were killed in this deadly ambush. Charred remains of those troops recovered narrate the horrific nature of this attack.

This terrain completely favours the insurgents. Dense under growth where at places even the sunlight fails to touch the ground.

The deadliest attack in 33 years; this ambush on an administrative convoy, just about 15 km from the Myanmar border, was reportedly carried out by a combined team of cadres drawn from Manipur-based outfits like the KYKL (KangleiYawolKannaLup), the KCP (Kangleipak Communist Party) and the Khaplang group of the National Socialist Council of Nagaland (NSCN-K). It is feared that these attackers might have fled across in to Mayanmar.

These specialist troops were to disembark at Machi  post of 20 Assam Rifles enroute. As per our sources this ambush was tactically very well sited between the Road Opening Area of Responsibility bordering 20 Assam Rifle and 6 Dogra.

This terrain completely favours the insurgents. Dense under growth where at places even the sunlight fails to touch the ground. Restricted visibility, very high humidity, wild animals, insects and reptiles make this into one of the most frightening places to operate.

As this convoy was meandering through this thickly wooded hilly terrain, the first two vehicles were targeted by the insurgents in a well laid out ambush.  They fired Rocket Propelled Grenades supported by heavy small arms fire.

This resulted in vehicles catching fire,burning to death the mounted troops instantaneously. The Indian Army troops were completely taken by surprise thus unable to retaliate in the manner rehearsed.

Going by the past incidents of such a nature, the North East insurgents are known to be carrying out dry rehearsals stretching into weeks before springing an operation. This also hints at failed intelligence on part of the Indian Army.

The soldiers overwhelmed by the violence were apparently shocked and confused. Advantageous situation for the attacker, the insurgents came out of their cover lobbing hand grenades on the survivors and slaying them with their machetes popularly known as Dah.

The selection of this site was meticulously done probably after a thorough recce and detailed planning. Going by the past incidents of such a nature, the North East insurgents are known to be carrying out dry rehearsals stretching into weeks before springing an operation. This also hints at failed intelligence on part of the Indian Army.

And as per their modus operandi the North Eastern insurgents have always executedprecise and lightening annihilation ambushes. Thus going by their history, any military observe of the North East would term this as a poorly executed operation on behalf of the insurgents. After all nearly majority of the soldiers did survive killing one of the insurgents.

In a state where abnormal is normal and a vast majority favours secessionism, it is unlikely for the peace to return soon. This incident has however has vindicated the stand of those military professionals who have opposed in unison the call to abrogate the Armed Forces Special Powers Act (AFSPA).

It is high time that the activists and the members of our civil society, who cry in support for human rights of those generally sympathising the insurgent violence and demonise the soldiers in the line of duty, should be probed to rule out any foreign hand.

Unlike the state of J&K, the insurgency in the North East is not driven by religious motivation but it is an out crop of years of neglect and failed state machinery.

In the words of noted writer and journalist, Kishlay Bhatacharjee, “Manipur has been living through protracted insurgency. While there are several opinions, two of the most significant reasons for its never-ending war are a) the state’s defunct police force and b) the failure of the Indian state to formulate a counter-insurgency policy after engaging in internal strife for over 50 years. There are several other reasons for this.

Police administration in Manipur has virtually collapsed and the North Block is seized of the situation. It is deeply corrupt; the officer in charge of vigilance that comes directly under the chief secretary is reportedly sitting on over 700 cases: the disposal rate is abysmal.

There are 7,000 vacancies in the police department but the process of recruitment and posting have always been questionable”.

Unlike the state of Jammu and Kashmir, the insurgency in the North East is not driven by religious motivation but it is an out crop of years of neglect and failed state machinery.