UAVs: Dilemmas in the application of air power

An analysis of UAV missions shows that they are used primarily for surveillance and intelligence gathering but can be easily configured for attack missions. The major advantage of UAVs is their ability to maintain station over an objective for long duration and respond to an emerging requirement with minimal delays. UAVs can be extremely useful in electronic warfare especially when acting as airborne communications relays and when gathering signal intelligence. They may also be able to function as airborne jammers and electronic decoys. Insurgent elements use not only mobile and satellite phones for communication but also sophisticated military phones. Intercepting their communications and locating them is essential.

In 2012, the USAF trained more UAV pilots than fighter pilots…

Unmanned systems have the potential to perform a number of other missions normally associated with manned aircraft such as search and rescue, bomb detection, battle damage, reconnaissance for nuclear, biological or chemical weapons, support of special operations and psychological warfare. However, Air Forces of the world will not give up manned aircraft and will only consider those missions where UAVs offer a viable alternative to manned flights. Small, hand-held or vehicle-launched UAVs with low flying endurance controlled by line-of-sight communications have very limited application in air warfare.

However, the Air Force could use the small and micro UAVs for protection and defence of air bases. In addition to combat and combat support missions, UAVs have a role in non-military tasks of internal security, counter-insurgency, coastal surveillance, monitoring of EEZs, homeland security and commercial ventures. However, the clear demarcation of military operations and security related activities is slowly getting blurred as many such operations are launched jointly by the military and security forces in support of national objectives.

The Indian government has deployed UAVs in Naxalite-infested areas to gather real-time intelligence to preempt or counter their attacks. The Home Ministry decided to deploy UAVs after the Dantewada massacre where 76 security personnel were killed. The Indian experience has shown that UAV operations have to be well- coordinated if they are to provide timely intelligence. Forested areas harbouring Maoists provide an impregnable cover from detection by mini and micro UAVs with only electro-optical sensors. In such a situation, infra-red sensors are essential. Medium altitude UAVs such as the Searcher and Heron provide the best results; but the information can be provided to field units only after analysis by a command centre over a secure data-link. Multiple sensors from high flying UAVs generate a mass of data and the intelligence gleaned from this large volume of information has to reach field units in time if it is to be used effectively.

Manufacturers of UAVs tout the technological capabilities and extol the potential of their products to provide combat support for every conceivable situation on the ground. In stand-alone demonstrations, UAVs seem to offer comprehensive solutions to the forces on the field. The success of US and NATO forces and CIA operatives reinforces this perception. An analysis of the UAV operations by the US forces in Iraq, Afghanistan and Kosovo shows that the conditions there were not the same as when conventional forces are likely to be pitted against each other. Some salient observations are: 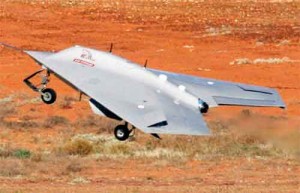 Two recent incidents underscore the fact that the impact of UAV operations in a lethal air defence and electronic warfare environment will not be the same as was experienced in the benign enemy air defence environment in Iraq and Afghanistan. On November 01, 2012, two Iranian fighter aircraft intercepted and fired upon a US Predator drone which the Americans claim was flying over international waters in the Persian Gulf. There was, however, no damage to the UAV. On December 04, 2011, an RQ-170 Sentinel drone operated by the CIA was hijacked in Kashmar in North Eastern Iran by an Iranian cyber warfare unit claiming that it was brought down by a combination of jamming of control commands and spoofing the GPS coordinates to the UAV making it believe that it was landing at its home base.

Sustained UAV operations have shown that the flight safety record has been a cause for concern particularly on account of accidents while landing. However, extensive crew training can reduce accidents to an acceptable level. UAVs are also at risk when negotiating adverse weather conditions in the air or on the ground.

The communication infrastructure associated with the command and control of a UAV is the key to successful operations. There is a trade-off between onboard intelligence and the demand for data-link capacity. Greater the dependence on a remote pilot, greater is the amount of data that must transfer between the UAV and the pilot. Reconnaissance systems that relay real time video require high bandwidth capability.

The US operations of UAVs are heavily dependent on satellite communications and it is projected that in the near future, the communication needs of the new generation UAVs is likely to exceed the capabilities of available communication satellites. Communication planners of the Indian Armed Forces and the Department of Telecommunications need to consider the available bandwidth, data-link upgrades, range between the source and receiver, network infrastructure, detectability and security of the system while designing for the future needs of all UAV operators in India. 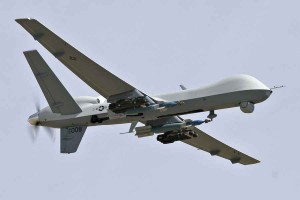 System reliability is always a cause for concern and redundancy is essential to cater for failures or degradation of the communication system. If the number of missions per day in Afghanistan were to increase from one a day to ten, there would be an exponential surge in the communication requirements. Communication between the operator and the UAV is over RF band or UHF SATCOM and both these are susceptible to jamming, spoofing and denial. Spectrum allocation is another area of concern as different countries allocate different bands for communications. Sale of electro-magnetic spectrum for commercial purposes restricts the availability for military applications. Laser communication is being explored as an alternative but is susceptible to degradation in adverse weather and is limited by line-of-sight.

UAV systems are usually less expensive than manned aircraft and initial concepts projected UAVs as inexpensive and expendable aircraft. Modern generation UAVs, however, cannot be considered expendable as the advanced sensors carried onboard are expensive. Current unmanned systems require as many, if not more, people to fly missions than piloted airplanes do.

For example, even while it is on autopilot, it takes a crew of three to operate a Reaper, one to fly, another to operate the sensor and a third to serve as military intelligence liaison. Another pair must deploy to the forward airfield to guide the UAV, using line-of-sight radio during take-off and landing. Improved automation may reduce manpower requirements in the future.

In recent years, UAVs have played an increasingly significant role in many combat zones. Irregular warfare operations coupled with the need to reduce operational risks and casualties, have made UAVs indispensable for military operations. It is projected that in future, UAVs will be able to make life-and-death combat decisions on their own, will be able to fly in civilian airspace with the ability to ‘sense and avoid’ collision with onboard avoidance systems and be capable of ‘buddy refueling’ to carry out strikes globally.

However, for the foreseeable future UAVs need human oversight and will not have complete autonomy. In combat zones, the use of UAVs boosts the morale of combatants and has a psychological effect on the enemy. But the world community is raising questions about the ethics of using robots to fight humans.

Unmanned systems provide a number of advantages to the military and it has even been suggested that the Joint Strike Fighter will be the last manned jet fighter the USAF will purchase. However, the idea of unmanned airplanes also runs counter to the aircrew-centric ethos that has defined Air Forces and hence is unlikely that UAVs will ever replace manned aircraft over the full spectrum of air operations in the foreseeable future.

One thought on “UAVs: Dilemmas in the application of air power”