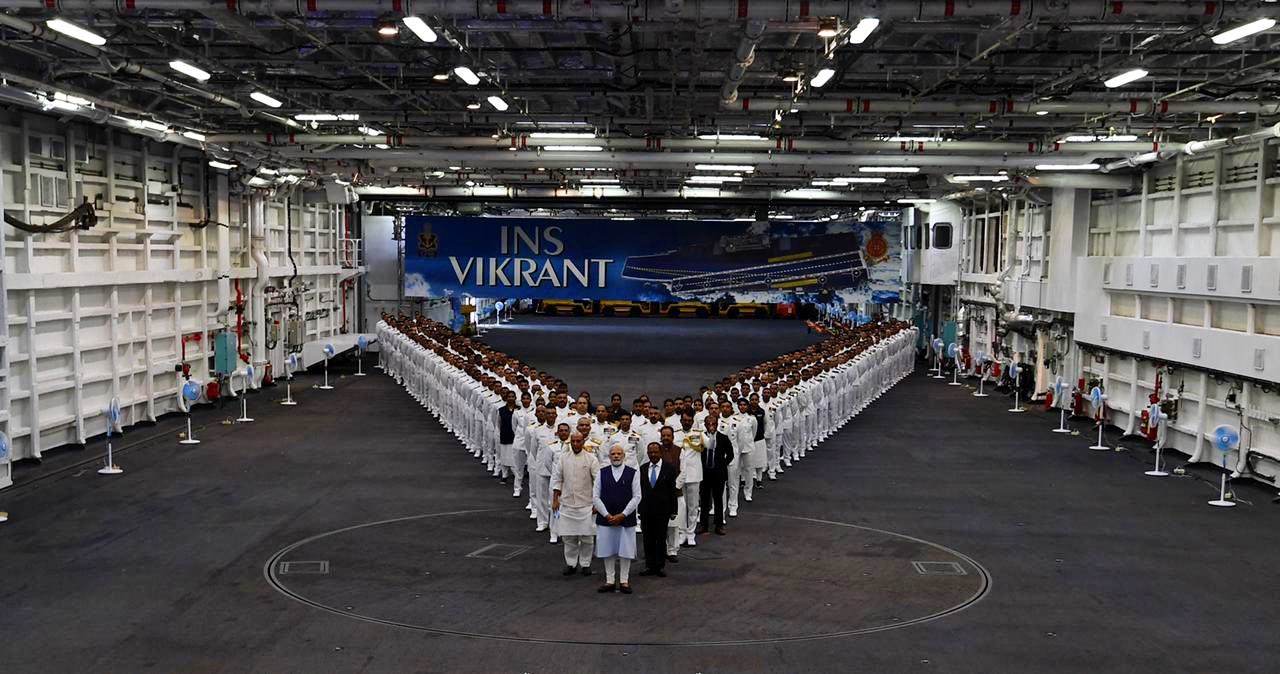 India has the dubious reputation of being the largest importer of conventional arms (SIPRI Yearbook). Dr. APJ Abdul Kalam, heading a committee to suggest improving India’s self-reliance quotient, assessed our SRI (Self Reliance Index) to be 30% only (1993) and suggested a road map to improve it to 70% by 2005. However, by 2005 it had crept to 32% and is around 35% now. As the PM commissioned the INS VIKRANT, the indigenously built aircraft career, on 2nd September 2022,it was redeeming to learn that 76% of it is indigenously built. The steel used has been supplied by SAIL in tandem with DMRL, a DRDO laboratory, with an excellent track record in indigenization. The quantity of steel used is equivalent to three Eiffel Towers. Most importantly, the gearbox has been manufactured by Elecon Engineering Company, an Indian MNC headquartered in Anand, Gujarat.The Control Movement system has also been supplied by Tata Power in collaboration with a Russian Company. Despite time slippages in both gearbox and Control Movement Systems, the indigenization of suchcritical sub-systems is indeed commendable. The engine will be powered by US LM-2500 gas turbines. The Kalam Committee had highlighted that India’s reliance on Germany for gearboxes for naval systems should be done away with. INS VIKRANT has fructified that wish list.

The Indian Navy has always been at the forefront of indigenization unlike the Airforce, where most of its fighter aircraft are either directly purchased (Mirage, Jaguar, Rafale) or produced by availing of Technology Transfer (SU-30). Cochin Shipyard which has built this aircraft carrier has taken the design from the Directorate of Naval Design.Twenty-six MiG-29, four Kamov helicopters, two ALH, and four Sikorsky Seahawk Multi-role helicopters will operate from the deck of the carrier. The Indian Navy has always aimed to be a blue water navy so that it can project its power across the high seas. The USA is a blue water Navy with 11 carriers, with three under construction (at different points in time 55 have been decommissioned). It tried to intimidate India during our war with Pakistan in 1971 by moving its seventh Fleet into the Bay of Bengal. It was due to India’s strategic friendship with USSR, that its 10th Operative Battle group moved in and the USA had to abort its mission. Now that India has three IACs (Virat, Vikramaditya and Vikrant) and the Navy is pitching for a fourth IAC, INS Vishal, its dream of becoming a blue navy is getting substantially realized and dark memories of the Seventh Fleet are getting dissipated. The Mig 29s of Russia have become the template of Indo-Russian friendship as they are the frontline attackers from the deck of Vikram Aditya inducted in 2013 and INS Vikrant now.

This takes us to the larger issue of the low overall Self Reliance Index in India. Herbert Wulf in a perceptive article ‘Arms Production in the Third World’ observed that self-reliance passes through five stages viz Off Shelf Purchase, Co-Production, Local Production of simple components, License Production and Indigenization. As far as India is concerned Wulf believes that India’s track record in absorbing technology in license production has been rather limited. This is clearly manifest in our license production arrangement with SU-30, where the indigenization is a measly 7% as against an expectation of 70% by now. HAL has become an assembler of subsystems imported from Russia, instead of indigenously producing parts and components and moving up the value addition chain. As regards indigenization, Wulf believes, it is almost nonexistent in critical subsystems because of the poor record of our indigenous R&D capability in the laboratories of DRDO.

The Kalam Committee identified critical areas of technology where our import dependence is almost 100%. In the case of Gas Turbine engines, the deficient areas are single crystal blades, special coating in blades, and FADEC (Full Authority Digital Engine Control). In missiles, it’s the uncooled FPA (Focal Plane Array) seekers, which are the eyes of the missiles. In aeronautics, it’s smart structures and stealth technology. In material, it’s nano material and carbon fibers. In sensors, its AESA (Active Electronically Scanned Array) radar, RLG (Ring Laser Gyro) and INGPS. Three decades later we are hamstrung in each of these critical subsystems. The Kaveri engine which was to power the indigenously built LCA has failed the design test. It is powered by an American GE 414 engine.  The passive seekers which are needed by weapon systems of the three services are nowhere in sight. Carbon fibers that are used in ALH are imported from Japan. The LRDE (Electronics and Radio Development Establishment), Bangalore laboratory is nowhere in making AESA radar. Nor is DRDL (Defence Research and Development Laboratory) able to make potent guided air-to-air missiles, where we depend completely on France. In other words, in propulsion, weapons, and sensors, DRDO’s track record in indigenization is rather dismal.

In India’s Defense Procurement Policy, the Make option (build from indigenous design) has been given primacy over Buy & Make (build on the basis of imported technology). The Buy (off-the-shelf purchase) is the least preferred. A number of options have been given in the make category to encourage collaboration with OEMs and foreign design houses. However, the Buy (Import) option remains the most practiced option. Dr. Kalam was prescient enough to conclude Joint Venture with a Russian firm to manufacture the BrahMos cruise missile. It has been a huge success and there have been requests for import. Similarly, he opted for a Joint Design and Development of MR SAM (Medium Range Surface to Air Missile). This model has brought substantial dividends for India in terms of indigenous capability.

When the PM flagged off the shining template of defense indigenization (INS Vikrant), there was euphoria that LCA II would be taken up as a replacement for Mirage aircraft, which have a wonderful record in terms of operational success with minimal downtime. There was also excitement that an indigenous stealth aircraft (Fifth Generation) will be taken up. The defense minister believes that these initiatives will realize India’s determination to bolster Make in India and rev up the India Military Industry complex, where many private players are now participating in view of the government’s pro-private sector approach. Such euphoria seems to be misplaced because the Military Industry Complex is dominated by inefficient and unaccountable Public Sector Undertakings and Ordnance Factories which have become PSUs and an extremely poor record of DRDO in terms of designing state of art critical subsystems like engines, avionics, sensors, and weapons. The government is not bold enough to privatize many products like ALHs, Surveillance Vessels and weapons. Design capability in HAL is quite poor.

We signed a design, development and production contract with the Russians to build an FGFA (Fifth Generation Air Craft) with the Russians in 2009. While we realized that we will profit from stealth technology, the Russians looked up to us for electronic warfare systems. The contract envisaged that a large number of designers will go to Russia to absorb the state-of-the-art technology. Russians unlike the Americans are trusted partners in terms of technology sharing and partnership. T-72, frigates and MiG-21 are shining examples. Inexplicably the government has come out of the FGFA contract. It has also come out of the JV with Russia for building Multi-Role Transport Aircraft (MRTA). Instead, it has opted for importing transport aircraft from the USA. The license agreement for Buy & Make by HAL of an MMRCA (Medium Multi Role Combat Aircraft) has been substituted for importing Rafale aircraft. Quite clearly there is a mismatch between the precept of make in India and the practice of import.

India does not have to invent wheels to come up with niche technology. It’s the age of collaboration where countries provide the best possible investment climate to OEMs and reputed design houses to set up JVs in developing economies. China is a good example which offers 100% FDI to OEMs to set up production bases in their country. Lockheed Martin outsources most of its manufacturing to units in China.It has become a big global manufacturing and critical cog in the global supply chain. India, on the other hand, is quite timid in its defense policy architecture (FDI) and tepid in networking with OEMs and design houses. Kalam sniffed these challenges and seized the opportunity to successfully cement JVs like the Brahmos or Joint D & D like MR SAM. Defense Production is a tricky terrain where the services, production agencies (public& private), and design organizations (DRDO) are constantly trying to protect their turfs. Since the creation of CDS (Chief of Defense Staff), the bureaucratic voice is either muffled or nonexistent. Therefore, political leadership and its vision is crucial, in how to shepherd India’s moribund military industry complex, embrace best global practices and usher synergy amongst its contending agencies. All the same Two Cheers to INS Vikrant!