To Resume Nuclear Testing is a Step Backward

US tested the world’s first nuclear device on 16 Jul 1945. On 06 Aug and 09 Aug 1945, US conducted world’s first and till date the only nuclear bombings, on Japanese cities of Hiroshima and Nagasaki. Over 214,000 Japanese lost their lives and thousands were maimed. Following generations too suffered. This 06 August marks the 75th anniversary of this carnage.

Washington Post, on 22 May 2020,reported that US will presumably resume Nuclear testing. The Senate Armed Services Committee, in the third week of June 2020, sanctioned $10 million for nuclear test. It also discussed means to reduce time between decision to test and the conduct of actual test.

If one reads this news in conjunction with US reluctance to renew the only remaining Nuclear Arms Control Treaty , the “New START”, which expires in Feb 2021, it appears that the aim of US is to threaten to launch a new nuclear Arms race to bankrupt Russia and China, if they both do not agree to a US initiated Arms Control Deal, which till now , is mentioned only in the passing, by the US and no actionable steps have been taken to go ahead with the proposal.

Since the first nuclear test in July 1945, the world has witnessed 2121 nuclear tests with yields ranging from zero to 50 KT. The table of total tests conducted by each nuclear nation and the last date of testing given below will convince the reader that when scientific simulations can predict the results of a nuclear test in a peaceful laboratory environment, live nuclear testing is nothing but a dangerous image building/ muscle flexing remnant of an era gone by. 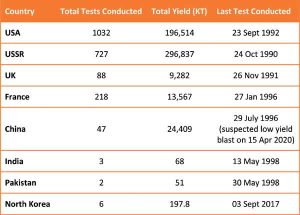 Since the news of likely resumption of Nuclear test by US, concerns are being raised on its environmental impact, on the public health risk, and the impending the diplomatic crisis, all in an already stressed world. The major fallout of the test maybe nuclear proliferation, especially now that China and Iran have signed a 25-year Strategic partnership which when seen in combination with the history of Iran’s quest for nuclear weapons and China’s not so clean history in adherence to nuclear non-proliferation, does not portend well for the world.

Resumption will have severe repercussions on peaceful use of nuclear power. In the pre Trump era of a rule based world, where the US, erstwhile USSR and now Russia, were in constant Arms race, their leaders were wise and prudent, alongwith other Nuclear powers , to discuss and sign treaties such as NPT, CTBT, MTCR, INF, Open Skies ,START, New START , to name a few.NPT of 1970 has been the bedrock of global nuclear security. Such treaties ushered in peace and prosperity across the globe. It also drew clear lines drawn between Nuclear weapons and Nuclear power for peaceful purposes.

NPT is central to non-proliferation and nuclear disarmament. It assures each nuclear NPT signatory state the “right” to develop and use of nuclear power technology and obligates them to enable other non-nuclear NPT member States in obtaining nuclear power capabilities. Further, NPT has a system of checks by International Atomic Energy Agency (IAEA), to inspect and to verify the use of nuclear material for peaceful purpose and preventing their proliferation for military use. IAEA’s role in New START and in the JCPOA with Iran is indeed a tribute to NPT. NPT is due for review in April 2021. NPT will be the first casualty of the new nuclear arms race.

In case the testing is not resumed, remaining eight nations of Annex 2 of CTBT will feel encouraged to endorse it. This includes India, Pakistan and North Korea who have not signed and US, China, Israel, Iran and Egypt who have not ratified it. The treaty will enter into force 180 days after the 44 states listed in Annex 2 of the treaty have ratified it. Any efforts to undermine CTBT by resumption of nuclear tests would have direct consequences on NPT.

Nuclear power is one of the bulwarks in our fight to reverse the “Climate Change”. Nuclear energy is the second largest source of low carbon electricity today, first being renewable sources of wind and solar. In EU, nuclear energy powers 30 percent of the energy needs, in US it is 20 percent and in India it accounts for 3.22 percent and growing. Due to its high capital cost, problems in storage of spent fuel and danger of radioactive leaks, if CTBT and NPT are a casualty due to resumption of nuclear arms race, countries will not be encouraged to invest in nuclear energy and opt for cheaper coal. This will skew the global warming and further endanger life on earth.

Nuclear weapons and nuclear energy are both based on the same physical process. Consequently, Nuclear power technology carries the risk of nuclear weapons proliferation. IAEA and other agencies which are in vogue to ensure that peaceful use of nuclear energy does not proliferate to making weapons, will be considerably weakened if world witnesses a resumption of nuclear testing and start of a new nuclear arms race, coupled with impending termination of New START in February 2021.Iran, then may completely abandon JCPOA. With Chinese help, it will master nuclear weapons technology. Prudent to mention here that Pakistan clandestinely acquired nuclear weapons technology with considerable aid from China.

Turkey and Saudi Arabia too are aspiring to become nuclear weapons state. The chaos triggered from the new arms race will find enough nuclear weapons enabled states to proliferate the technology to them, on payments, to fund their own arms race.

Proliferation, either from present peaceful purposes or clandestinely, will see new nuclear weapons states emerging and defeating NPT. Such new nuclear states will seek delivery means and this will make MTCR a casualty, as then termination or abrogation of MTCR would make good economic sense for MTCR signatory powers, which have expertise to export missile technology.

US, along with China, Israel, Iran and Egypt, is a non-signatory to CTBT. US, since September 1992 has imposed a moratorium on itself, banning further nuclear testing. To abandon this self-imposed moratorium is likely to have catastrophic consequences. The belief that resumption of nuclear testing and demise of New START will generate a new nuclear arms race, which will then force China to the join Arms Control talks, is misplaced. China has miniscule numbers of nuclear weapons and their delivery system, when compared to US and Russia. China has been persistent that if talks have to be held, both US and Russia must reduce their nuclear weapons and their delivery system, substantially or completely.

The news of resumption of Nuclear testing by US must be taken very seriously by all the countries and by all the international bodies and agencies. With immediate effect, each must play its part to prevent the current US Administration from conducting a new nuclear test. All the leaders of the G7, G 20, NATO, EU, SCO, ASEAN must personally speak to the US President and dissuade him from breaking its self-imposed moratorium, which has given credence to NPT, CTBT and other Arms control treaties and enabled and encouraged peace, development and prosperity all around the world.

The hour to act is now, keeping in mind the US elections. The conduct of nuclear test for the purpose of projecting an image of a powerful leader to facilitate re-election, is not implausible. The forthcoming G 7 meet in US in September (where Russia and India too are likely to be invited) is possibly the last instance where influentially global leaders can convince US against conducting the nuclear test and for the New START, to become history. It’s a must do as the security of the human race is at stake and Mars is not yet an alternate location for them.

Today, India and the world are facing an unnerving range of challenges. It ranges from the COVID 19 pandemic, economic hardships, growing inequality, Climate change and mounting tensions between the top three super powers and their belligerent acts of putting global security at risk. The world, at this critical juncture can ill afford to allow a major power to resume nuclear testing, unleash a Nuclear Arms race, weaken beneficial global treaties and further aggravate the miseries, the world is suffering today.

This, especially in the backdrop of the 75th anniversary of the nuclear holocaust.

15 thoughts on “To Resume Nuclear Testing is a Step Backward”