The Rafale is finally on IAF inventory 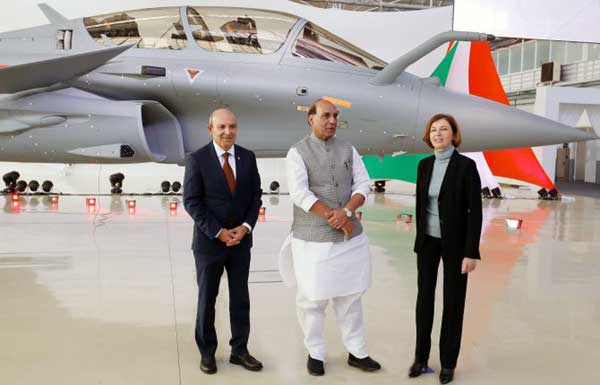 The Indian Air Force had issued a “Request for Information” (RFI) for 126 MMRCA in 2001. After much dilly-dallying, for almost two years beyond the planned December 2005 issue date, the MoD finally announced a formal Request for Proposal (RFP) in Aug 2007, once the Defence Acquisition Council (DAC) had granted the ‘Acceptance of Necessity’ (AON) in June.

After meticulous trials, the IAF test pilots shortlisted the French Rafale and the Eurofighter Typhoon, out of the six proposals that had been received. Subsequently, on examination of the commercial bids, the Rafale was declared as the ‘chosen one’. It was expected that on completion of procedural approvals the contract would then soon be inked; but, alas, it was not to be.

While the file moved in the Ministry for the RM’s approval and then for the Finance Minister’s consent, before the final blessings of the Cabinet Committee on Security (CCS), a spanner in the works was thrown in; the negotiations were put on hold after doubts were raised on the selection process and an independent inquiry ordered on the directions of the then Defence Minister. An independent committee examined the entire process of determining the lowest bidder and gave an all clear for the negotiations to resume.

Notwithstanding the optimism from all quarters, impediments continued in the smooth finalisation of the contract. Delays cropped up in the production process negotiations; HAL was to assume full responsibility for the timely preparation of its infrastructure and specify it in the document; other Indian manufacturers who were to be collaborating with Dassault Aviation (DA) and HAL for the production of the systems, sub-systems and accessories were to get their act together to meet the deadlines of the contract.

While the Contract Negotiations Committee (CNC) had finalised most of the maintenance aspects, certain issues, relating to Transfer of Technology (ToT) and offsets, remained unresolved between HAL and DA. The key issues were as to who would bear the cost of the 2.7 times additional man-hours that the HAL had asked for, the additional ‘non-recurring’ cost that the HAL would incur in setting up the production infrastructure, and who between the two would take responsibility for the 108 aircraft to be manufactured under licence by HAL.

The dilemma facing the IAF now was whether to continue negotiations indefinitely, or cancel the programme and start afresh; neither was palatable! It was then decided to obtain the ToT through the Strategic Partnership channel, as it was considered impractical to buy such a large number of aircraft without technical knowhow.

As the cost of the fly-away aircraft was known and a new proposal would tantamount to a delay of another 5-6 years, thus affecting operational preparedness, it was decided by the new political leadership, which now had the reins, to withdraw the MMRCA RFP in June 2015. A Government-to-Government (G-2-G) procurement of 36 aircraft was then decided.

A fresh DAC approval was sought for the acquisition of the 36 aircraft through the G-2-G route by IAF. An approval was also obtained for a change of armament and deliverables, to enhance the muscle-power of the Rafale. An advantage to the IAF to obtain the necessary approvals and expedite the negotiations, was that the aircraft was already evaluated; with the CCS approval in hand, after the consent of the Ministries of Finance, External Affairs, Law & Justice, the final Inter Governmental Agreement (IGA) was signed on September 23, 2016.

The IGA, a much-debated topic during the just-concluded elections, includes the cost of 36 aircraft, weapons, role-equipment, tools, testers, ground equipment, training, and documentation, with also the setting up of two simulators as turnkey project. What is not included are the maintenance costs, which will follow as a separate contract on the revenue route, as these costs are not known at the time of procurement.

It would also be of interest to the reader that this is the first ever contract with Performance Based Logistics (PBL), which would provide maintenance support at two operating bases (in this case, Ambala and Hashimara), for five years to be paid annually with a minimum assured operational availability of 75 per cent of 36 aircraft at all times, with provisions to extend the PBL arrangement for a few more years at the present day cost and terms.

It has been a long wait of almost two decades for the IAF for the MMRCA (Rafale) to be inducted. The Rafale, with the latest of technologies in terms of sensors, the best of weapons, and enhanced survivability through a state-of-the-art package of electronic warfare, is one of the most potent aircraft of its class.

With the India-specific package of enhancements, favourable cost, better delivery timeline and maintenance terms, a longer industrial support and PBL commitment, and an additional warranty clause, the IAF has got a deal like never before. Some of the additional clauses in the contract are a result of deep oversight and commitment by the supplier, as well as the MoD, and could not have been obtained in a normal multi-vendor procurement process. The G-2-G process has brought to the IAF the latest of sensors and armament, which could not have been quoted in a normal RFP.

The Rafale, as has been quoted numerous times, is a ‘game-changer’ in the South Asian skies. It will be an exponential addition to the operational capability of the IAF, thereby boosting its deterrence capacity against any adversary.

Although, the IAF would like to have another 36 Rafale aircraft and has also moved the DAC for another 114 aircraft, it is now for the Government to ensure, while working within the budgetary allocations, that it does not retreat into a shell, but  gets the IAF depleting inventory back to a healthy state.