The IAF and its Need for Close Air Support

The outcome of the next war is going to be determined less by the IAF’s deep strike or air combat capability, more by its ability to support own troops in mountainous terrain. No matter what targets the PLAAF manages to bomb deep in India, troop positions on the ground will decide whether the war ends in victory or defeat. If our troops are poised to enter Tibet, the war will end on our terms. What the IAF would need to do is dominate the air space over the mountains and unleash its Close Air Support (CAS) power.

HAL, as it exists today, is neither as incompetent, nor as mismanaged as is widely believed…

The major military powers of the world – USA, Russia, France and China – meet their weapon systems requirements largely through domestic production. India, which aspires to be a great power, imports nearly 70 per cent of its weapons. Even worse, the country has struggled for around 50 years and has spent crores of rupees to enhance its defence production capability without much progress. The reasons for India’s failure to reduce its dependence on imports have been well debated in the media. However, some facets of the problem may have been completely overlooked.

Anyone who has closely followed the debate on defence production is likely to be familiar with the following explanations for our poor showing. We haven’t built an industrial base to support our defence production,” say analysts. “Each time we want to build a weapons system we have to start from scratch,” bemoan officials of the Defence Research and Development Organisation (DRDO). “The problem lies in the incompetence of Hindustan Aeronautics Limited (HAL) and the DRDO,” says the military staff. Blame game at its worst!

Industrial Base for Defence Production

We have been building fighter aircraft in India since the 1960s – Ajeet, Marut, MiG-21, Jaguar, Su-30MKI, Hawk and the Light Combat Aircraft (LCA). So how can anyone say we don’t have an adequate industrial base? Didn’t we create an industrial base during the 50-year long saga of licenced production? Over the years, HAL and DRDO have acquired the infrastructure and Intellectual Property (IP) to build contemporary weapon systems as a result of very expensive Transfer of Technology (ToT) agreements. Why can we not use the IP and infrastructure to design and develop our own weapons?

Analysts attribute the failure to poor management and laid back work culture typical of the public sector. The explanation has a ring of truth, but only half the truth. Take the case of the Indian Air Force (IAF). Its weapon procurement policies are as much to blame for the impasse in domestic airborne weapons system production as the laid back work culture at HAL and DRDO. The fact that DRDO has had more success developing sensors and weapons systems for the Navy is a pointer. The Navy helps DRDO gain strength in technological domains relevant to its most urgent needs – Heavyweight Torpedoes and Maritime Surveillance Radars – and places orders when DRDO developed systems come good.

The IAF does not help HAL build strengths – one could even say the IAF does not allow the HAL to build strengths! Because the IAF follows a procurement policy that is largely obsolescence-driven – aimed at replacing strike, air defence, air lift and reconnaissance assets due to be phased out with similar state-of-the-art equipment of similar nature. It is often alluded to in the media that the IAF is averse to procuring aircraft from HAL. This is not true. The IAF has consistently striven to accommodate HAL and DRDO capabilities in its procurement plans – LCA, HPT-32, the Intermediate Jet Trainer (IJT) are some examples – only to have its procurement plans derailed by interminable delays and massive performance shortfalls. From the IAF’s point of view, accommodating delays and shortfalls would lead to capability erosion that would not be in the long term interest of the nation, or even HAL/DRDO for that matter.

Designing and developing a fighter aircraft is a far greater challenge than developing systems that DRDO has had success with developing – radars, missiles, tanks, guns and torpedoes. Combat aircraft sub-systems (electrical, hydraulic, life support, navigation, weapon management and cockpit displays) are smaller and lighter, sensors (radar, radio and optical) more compact and capable, and engines technologically more advanced. There is also the challenge of tightly packaging and seamlessly integrating the subsystems, sensors, and engine(s) into a lightweight, aerodynamically efficient airframe that is optimised for low observability and high maneuverability! 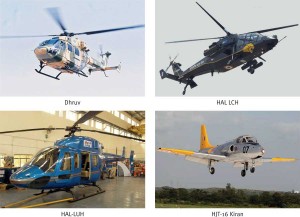 It is interesting to note that the IAF has readily embraced electronic sub-systems developed by HAL/DRDO for its aircraft – Display Attack Ranging Inertial Navigation (DARIN) for Jaguars, Radar Warning systems for Russian fighters. And the services have bought Radars and Missiles developed by DRDO. The alleged IAF apathy to indigenous weapon systems is a figment of imagination of a section of the press. And the same can be said about the alleged incompetence of the public sector defence undertakings!

HAL, as it exists today, is neither as incompetent, nor as mismanaged as is widely believed. Its aircraft design and development capability may not be first rate but its capability is certainly not trivial. HAL has proven credentials in developing helicopters – Dhruv, Light Combat Helicopter (LCH) and the Light Utility Helicopter (LUH). It has started full spectrum (not licenced kits) production of Tejas LCA. The company is in the past developed the HJT-16 Kiran jet trainer and is now and developing albeit fitfully the HJT-36 Sitara IJT. It can be objectively stated that at this point of time, HAL has the IP and infrastructure to develop helicopters, single-engine lightweight fighters and jet trainers. It can meet the current and future requirements of the three services for these aircraft types.

Future projects must build on current strengths of HAL. HAL and the Aeronautical Development Agency (ADA) jointly have the capability to meet IAF timelines for LCA Mk-2, with design of the aircraft already near finalisation. ADA’s LCA development experience and over seven years research into fifth generation fighter technologies in combination with HAL’s manufacturing and product support capability give the two organisations a good chance of making the Advanced Medium Combat Aircraft (AMCA) a success within the next ten years.

What HAL must not do is take on projects that are well beyond its core strength areas. Rafale licence manufacture, for example. It would provide HAL another assured revenue stream but will not help the country reduce its import dependence. HAL has been licenced manufacturing the Su-30MKI for many years now. However, an attempt by HAL to develop a new air dominance fighter based on its Su-30MKI licenced production experiences will almost certainly not succeed. As they say, with licenced production you learn how, not why.

The requirement to modify the Su-30MKI to carry an air-launched version of the BrahMos missile illustrates the limitation of licence production knowledge and experience. HAL struggled for two years and sought help from Sukhoi before it was able to strengthen the Su-30MKI centre point pylon to carry the BrahMos missile. The project is likely to take four years to complete!

Aircraft development is an evolutionary process. Whether developing an evolutionary new aircraft, or a revolutionary new generation aircraft, one starts from where one currently is, not from scratch. The T-50 PAK FA is a radical new fighter design, but it is an offshoot of the same Sukhoi Bureau knowledge and technology base that produced the Su-27/30 family of fighters. HAL did not acquire the Sukhoi Bureau’s knowledge and technology base with Su-30MKI licenced production rights. It is for this reason that joint development and production of the PMF/FGFA is turning out to be such an intractable issue.

Emerging from the Logjam

HAL and DRDO have the ability to provide the Armed Forces with useful airborne weapons systems. HAL’s inability to deliver a Rafale like 4++ or FGFA at this point of time is not alarming. Also, the right way forward for HAL is not joint production of Rafale or FGFA; it is dogged development of the AMCA with the ‘how’ and ‘why’ knowledge base at its disposal and foreign tie-up to fill gaps. It is worth remembering here that the ‘how’ knowledge can to some extent be gleaned from strip down study of systems without violating IPR. The big question now is – If HAL cannot produce all the aircraft that the IAF needs, how are we going to reduce our dependence on imported fighter aircraft?