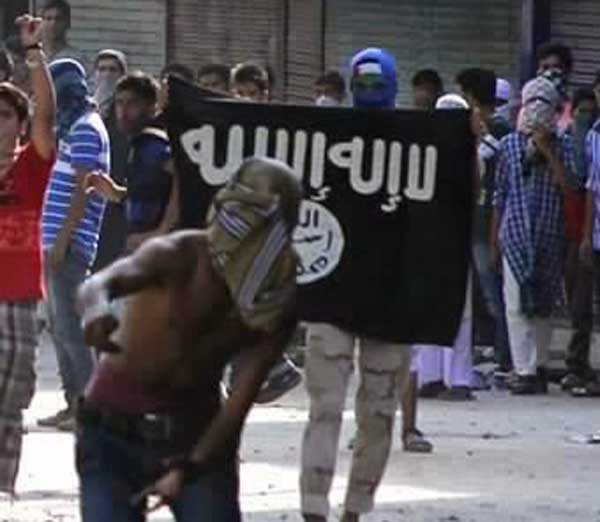 ISIS Flags appeared in Kashmir during protests after Eid prayers

It is a troubled world that we live in today and there are many reasons for this. Draw a straight line from Pakistan to Turkey, swing down to the Gaza Strip and from there to Yemen, and we have an area embroiled in all sorts of conflicts, some recent and some that have lasted for decades. Another journey from Sinai to the Maghreb, thence to Nigeria and Central Africa and ending in Somalia, covers another arc of what is, at times, extremely brutal conflict.

What stands out most is the brutality of this group (ISIS) that has suddenly become a semi-state that no one seems to challenge, and the extent to which neighbours would go to allow the genocide of the Yazidis and Kurds to preserve their national interests.

Three recent maps would also explain the depth, scale and complex nature of the conflict. One, a map of Baghdad depicting, in small red dots, car bomb explosions in the city since its so called liberation in 2003. The entire map is full of these red dots and it is impossible to read the name of the streets or localities. The second map is of Syria with its conflict zones and the areas held by various factions ripping the country apart. It is more like a scrambled egg that has gone wrong and it is impossible to unscramble this.

The third map was published by Washington Post a few days ago, and shows the countries from where various jihadis have joined battle in Syria on behalf of ISIS. Many of the volunteers are from countries that are actually allies and friends of the US, but are fighting against US interests. This map may not be very accurate as it does not show anyone as having gone from India.

The sudden rise of the ISIS and its successes, its wealth and armament are a subject of some, if not complete mystery. Above all, what stands out most is the brutality of this group that has suddenly become a semi-state that no one seems to challenge, and the extent to which neighbours would go to allow the genocide of the Yazidis and Kurds to preserve their national interests. Local paranoia against Shia regimes that have strengthened since the Iraq War, local ethnic and sectarian conflicts, regional and big power interests (the Russian-American rivalry in the region is still active) are the source of trouble and confusion.

Then there is the American desire to fix the obdurate Bashar Assad, demonstrably be the Super Power and sell the American Dream but without wetting its feet. The trouble now is that we live in a world where military power alone no longer guarantees success. This is bad news at a time when defeat is unacceptable, as it is going to be perceived as a sign of decline. The worry is that rich and powerful nations are like Great Gatsbys.

They destroy other nations and then retreat into their carelessness and profligacies.

India has been a sea of tranquility and it is too early to say if there is a link between the storm brewing on both flanks, but the security agencies, indeed the entire country, have a task on their hands.

Meanwhile, others have to live with their violence and uncertainties. But the virus spreads to other parts reaching the rich nations. One person killed there is prime time news, while six Hazaras killed in Pakistan are a statistic. Maybe these are also turf battles as Pakistan becomes the battle ground. The AQIS in FATA is headed by Ustad Asim Umar, a TTP propagandist and former Harkat-ul-Jihad al-Islami (HuJI) cadre. There is no idea how many have gone and what of the future.

There is another storm brewing in our east. The fact that it needed the personal visit of the NSA only indicates that the Burdwan episode involving Bangladeshi terrorists is a matter of serious concern. This could have implications for India and Bangladesh, and cells have been active in the Jalpaiguri sector which would impact our North East too.

The Burdwan blast opens Pandora’s box. Recall that Jamaat-ul-Mujahideen Bangladesh (JMB) had taken shelter in West Bengal following a clampdown on them in 2005 in Bangladesh. It set up a bomb-making factory and a training facility. This would have taken a few years and there would have been local groups cooperating too. JMB is a progeny of HuJI-B, which in turn is an offshoot of the original HuJI of the Afghan Jihad days with its Al Qaeda connections. It subsequently spawned groups like Harkat-ul-Mujahideen, Harkat-ul Ansar, Jaish-e-Mohammad and the Taliban. JMB will have no qualms in targeting Bangladesh and India.

So far, India has been a sea of tranquility and it is too early to say if there is a link between the storm brewing on both flanks, but the security agencies, indeed the entire country, have a task on their hands.