The China Factor: India’s Tryst with the Dragon 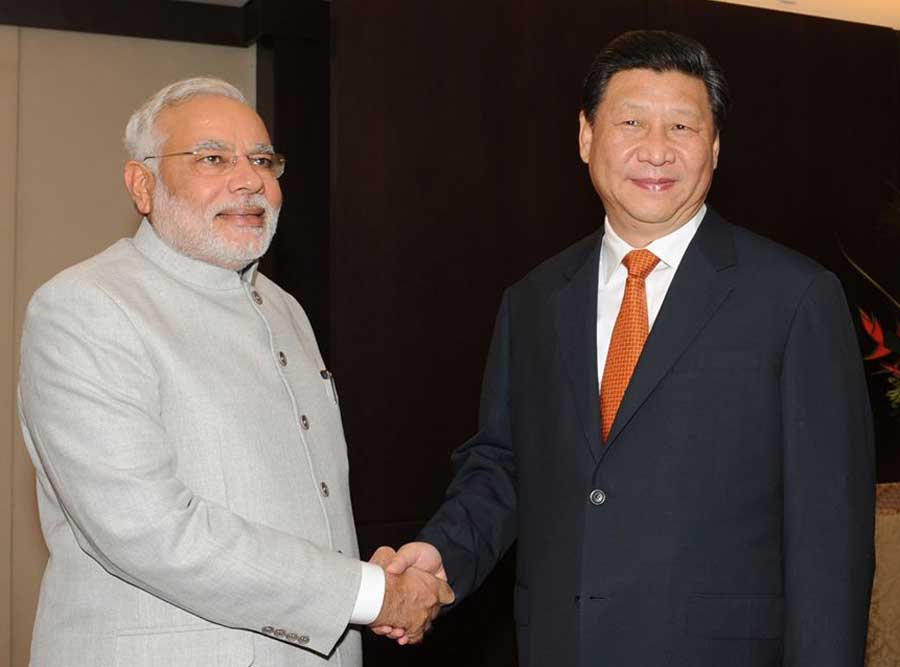 Beijing’s accelerated push in recent years for recognition as the dominant power in the Asia-Pacific has accentuated the implicit contest for strategic space between Japan, the US, India and China introducing volatility in the region and making South East Asian countries nervous. It also occurs when the economies of major powers are still fragile.

…Modi has no option other than economic cooperation with China as India perforce has to recognise China’s economic and military superiority in Asia. It stressed that Modi would have to accommodate China, not out of choice or inclination, but out of necessity.

China’s sudden assertiveness since the end of 2007 has been prompted by a combination of factors, but mainly by: the global economic downturn; China’s considerably enhanced economic and military strength; and Beijing’s perception that the US as a global power is on the decline and this is now the opportune moment for China to regain its self-perceived rightful position on the world stage and alter the status quo in Asia.

The Chinese Communist Party (CCP) leadership is divided on whether to write off the US as the sole world power. One view is that the US is a power irreparably on the decline while the other, which seems to be steadily gaining ground, argues that the intrinsic strength and resilience of the US will ensure its return to the world stage as a stronger, more effective power. There is consensus, however, that the US ability to project power simultaneously in different theatres is presently constrained, thus offering China a window of opportunity that would last at most between 5-10 years.

Undeterred by US actions like the ‘Asian Pivot’ or Trans-Pacific Partnership (TPP/TPIP) conveying that it is not about to cede influence in the Asia-Pacific, Beijing is pressing ahead with efforts to achieve its global and regional ambitions. The continuing tense stand-off with Japan, which is a US ally and East Asia’s strongest power, underlines Beijing’s willingness to push the envelope in the apparent confidence that the US, Japan and Vietnam will stop shy of confronting it. In February 2014, China’s Ambassador to the US, Cui Tiankai, reiterated the role Beijing desires in the Asia-Pacific. China’s actions in the past few years have dented US credibility as a reliable ally willing to back its partners in the region.

Meanwhile, there have been important changes in the nature of the Chinese State, which are particularly relevant to India- China relations. The ouster of former Politburo (PB) member Bo Xilai in 2012 was a watershed event in China’s politics and has seen a visible ‘hardening’ of the Chinese State. Factional differences have been subordinated to protecting the Party Centre and ensuring the CCP’s monopoly on power. As the Party further tightened its grip over key levers of the State, Xi Jinping consolidated greater authority. In addition to holding China’s top Party, Government and Military posts, he now heads seven of the Party’s Central Leading Small Groups, which are the highest decision making bodies. The Party has concretised Xi Jinping’s status in the CCP hierarchy with the authoritative Party theoretical fortnightly journal ‘Qiu Shi’ (June 2014) describing him as “one of China’s greatest Communist leaders”. Xi Jinping is today China’s most powerful leader since Mao Zedong.

China’s leadership began to woo India to prevent the new leadership from drawing closer to the US and Japan as well as seize economic opportunities.

Important is Xi Jinping’s ‘China Dream’ which envisages: making the Chinese people wealthy; making China a strong nation; and the rejuvenation of China. This muscular aspiration for China spelt out by Xi Jinping at the 18th Party Congress has been adopted by the entire Party and already entered the lexicon of the CCP. Pertinent to India-China relations is ‘rejuvenation’, which implies the restoration to China of its self-perceived rightful international status and recovery of all its territories. The new passports published by China depict its claimed territories, as do its actions in the South China Sea and East China Sea and the expanding claims over Arunachal Pradesh and Jammu and Kashmir.

Beijing’s stance on ‘core national issues’ in bilateral relations has been made explicitly clear in two despatches of China’s official news agency ‘Xinhua’ in August 2011. Addressed to Japan and the Philippines, these clarify that ‘burgeoning economic ties do not mean good bilateral relations’ which depend entirely on the recognition and acceptance of China’s ‘core national interests’.

The developments in China almost coincide with the emergence in India of Prime Minister Modi with a majority in parliament, unprecedented for thirty years, after a resounding democratic electoral victory. This offers an opportunity for engagement on fresh and revised terms. Prime Minister Modi moved with alacrity in outlining India’s strategic interests and, within days of taking office, appeared to delineate India’s strategic geographic neighbourhood. In doing so, he identified the areas where Indian interest will focus and Indian and Chinese interests could potentially bump against each other. His visits to Bhutan, Nepal and planned trip to Japan reinforce this.

China has taken note of these developments. Its media, which closely tracked India’s general elections, observed that Modi represents a right-wing political party and noted his utterances on the campaign trail and visit to Arunachal Pradesh. It anticipated that India’s stand on China would harden in the event of his victory. Senior researchers in Chinese government think-tanks differed, however, and assessed that Modi’s statements were actually political posturing and India’s policy towards China would remain substantially unchanged. China’s leadership began to woo India to prevent the new leadership from drawing closer to the US and Japan as well as seize economic opportunities. Chinese Premier Li Keqiang’s telephone call to Prime Minister Modi within three days of his victory emphasising that ‘China is willing to enhance mutual trust’, and expressing confidence that India would grow under Modi’s leadership, reinforce this. Articles in China’s state-controlled media now projected that India-China relations would improve.

The protracted 20-day incursion by Chinese troops in Apr/May 2013 in the Depsang Plains of Ladakh was planned and deliberate.

At the same time, the tone of a Chinese-language official ‘Xinhua’ despatch of May 29, 2014, differed noticeably from other Chinese media reports. This Xinhua despatch asserted that Modi has no option other than economic cooperation with China as India perforce has to recognise China’s economic and military superiority in Asia. It stressed that Modi would have to accommodate China, not out of choice or inclination, but out of necessity. While this is arguable, the Xinhua despatch does exhibit China’s self-confidence.

Chinese Foreign Minister Wang Yi’s visit (June 8-9) was intended to engage with India’s new right-wing Government and is part of China’s strategy of ‘Peripheral Diplomacy’. China’s focus is on economic cooperation with India. It is anxious to find a new market for its huge reserves of surplus cash and as another avenue for investment. Chinese President Xi Jinping’s impending visit to India in Sept/Oct has the economy as its focus and he is reportedly being accompanied by 350 Chinese Chief Executives (CEOs) amidst much talk of investing in India’s infrastructure, high-speed railways and the Bullet Train. Chinese diplomatic missions in India are selecting locations for the ‘Special Industrial Parks’. Chinese investment in infrastructure – including roads, flyovers, railways, hydro-electric projects, multi-storey office and residential buildings – and India’s economy will be of mutual benefit, but India needs to demarcate the sectors open to Chinese business. Otherwise, China will soon acquire a powerful business lobby capable of adversely influencing national strategic decisions. In order to ensure strategic flexibility and increased investment, Chinese investments must be balanced by offering similar competitive opportunities to the US, France, Germany, Japan, Taiwan and Singapore. India can particularly benefit in the hi-tech, advanced electronics and defence sectors by encouraging investments from the US, Japan and Taiwan on very preferential terms.

…Tibet is part of the People’s Republic of China – a statement that India has resisted repeating the past few years. Insistence on this statement will be to ‘test’ India’s new government and its issue will be viewed by Beijing as indicative of India’s weak resolve.

As both countries try to recalibrate relations, two events retain their importance. The protracted 20-day incursion by Chinese troops in Apr/May 2013 in the Depsang Plains of Ladakh was planned and deliberate. Proposed by the PLA it was approved by the Politburo which, after discussions, assessed that India would not cancel Li Keqiang’s visit. It was certainly not a local action by a local PLA Commander. Quite pointedly, on May 14, 2013, the official ‘Zhongguo Qingnian Bao’ (China Youth Daily) published an article implicitly laying claim to Ladakh and describing it as part of Tibet.

Also, in keeping with past practice and just two days before Chinese Foreign Minister Wang Yi’s arrival in New Delhi, China raised the outstanding border issue and the Dalai Lama’s presence by officially protesting the presence of Lobsang Sangay, head of the Central Tibetan Administration, at Prime Minister Modi’s swearing-in ceremony. Wang Yi too, at his press conference in New Delhi, made a carefully worded remark that the issue of stapled visas by China were a “unilateral” “flexible” “goodwill gesture” or, in other words, that the status of Arunachal Pradesh and Jammu and Kashmir remain disputed.

The previous BJP-led NDA government’s stance, Prime Minister Modi’s utterances during the campaign and invitation to the Tibetan ‘leader’ Lobsang Sangay, created a resonance in Beijing. Very recent reports emanating from China suggest that China’s leadership is deliberating insisting, during Xi Jinping’s visit, on reiteration by India that Tibet is part of the People’s Republic of China – a statement that India has resisted repeating the past few years. Insistence on this statement will be to ‘test’ India’s new government and its issue will be viewed by Beijing as indicative of India’s weak resolve. On the vexed border issue, little progress can be anticipated unless both leaders and, especially Xi Jinping, decide to use their strength and push for a mutually acceptable settlement. China’s recent utterances on issues of sovereignty and territorial integrity, however, make this a distant possibility.