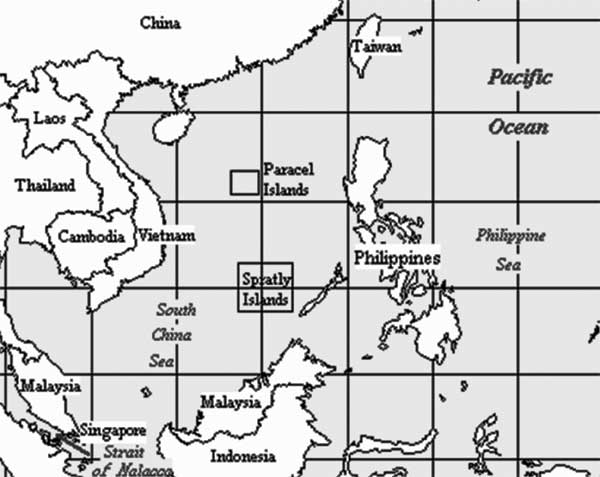 There never seems to be a dull moment in so far as the raging controversy over the strategically located South China Sea is concerned. The most recent development in the high voltage melodrama surrounding the Sea China Sea was the slamming of US by Beijing for the escalation of tension in this disputed oceanic stretch. Beijing believes that it was the US influence peddling that has resulted in one time adversaries, Philippines and Vietnam, joining hands to strengthen the security ties for mounting a joint, coordinated response to the aggressive posturing by China in the disputed South China Sea region.

Citing historical reasons and geographical logic, China has claimed a sovereignty over the resources of South China Sea through which more than $5-trillion in global trade passes each year.

Everything going as planned, an ambitious action plan being finalized by Vietnam and Philippines would result in joint military exercises on a regular basis. For long US has been urging countries that are a party to South China Sea dispute to coordinate their action plan to counter the growing Chinese expansionism in South China sea region.

In this context, Fu Ying, a spokesperson of China’s National People’s Conference, has blamed the US sponsored “Pivot to Asia” strategy for the growing tension in Asia Pacific region. According to Ying, the “Pivot to Asia” doctrine has been instrumental in the deployment of around two third of US naval resources in Asia Pacific. Blaming US for its partisan and controversial stand on the South China Sea dispute, Ying noted “The US has claimed that it takes no position on the disputed Nansha (Spartly island). But what it is doing and saying now makes us feel that it is provoking tensions and so we have a big question mark on the motive of the US side”.

On another front, the discussion between US and South Korea to formalize the plan to station a sophisticated Terminal High Altitude Area Defence (THAAD) System in the Korean peninsula has come in for severe criticism from China. For Chinese perspective is that this highly sensitive system can be exploited for monitor the events in mainland China too. The plan to deploy THAAD was a fall out of the recent nuclear and rocket tests by North Korea. On his part, China’s Foreign Minister Wang Yi has driven home the point that Chinese activities in the South China Sea region should not be construed as militarisation.

Citing historical reasons and geographical logic, China has claimed a sovereignty over the resources of South China Sea through which more than $5-trillion in global trade passes each year. ”The Chinese people will not agree if we allow further impairment of our sovereign rights and maritime rights and interests. By developing the islands and reefs in the region, we help better protect China’s own interests, make China better provide public services to this region and to uphold peace and stability in the region,” states Ying. While claiming that it would not pursue militarisation of South China Sea, in February this year China deployed fighter jets in the disputed Woody islands which is also claimed by Taiwan and Vietnam.

US intelligence sources claimed to have spotted Shenyang J-11 and Xian JH-7 combat jets on woody islands forming part of the disputed Parcel chain. What’s more, the Washington based Centre for Strategic and International Studies (CSIS) has released satellite imageries revealing what appears to be a high frequency radar installation under construction on an artificial island on Curateron Reef in the Spartlys. “Placement of a high frequency radar on Curateron Reef would significantly bolster Chinese ability to monitor surface and air traffic coming north from the Malacca Straits and other strategically important channels, “said Asia Maritime Transparency Initiative of CSIS.

China is also known to have deployed a surface to air missile (SAM) system in the Woody island. However China has said that reports about the recent SAM deployment in Woody island is no more than a hype. Even so, Western defence analysts have expressed the concern over the growing Chinese military presence in the disputed islands of the South China Sea region saying that it would result in Beijing controlled air defence zone.

However, US has said that freedom of naval movement and aircraft flights in the South China region should be ensured at all cost. “The missile deployment reinforces the view that China intends to exert growing control in these international waters including potentially by declaring an Air Defence Identification Zone” observes Rory Medcalf, Head of the National Security College at the Australian National University.

But then Ni Lexiong, a naval expert at the Shanghai University of Political Science and Law states that “deploying surface to air missiles on our territory is completely within the scope of our sovereign rights. We have sovereignty there so we can chose whether to militarize or not.” Vietnam, Taiwan, Malaysia, Brunei and Philippines have rival claims over the resources of South China Sea.

…the escalating tension in South China Sea could have an unsettling effect on the long term global peace and stability.

Significantly, Indian Prime Minister Narendra Modi has time and again made it clear that freedom of navigation in international oceanic stretches must be protected and sovereignty issues and disputes must be resolved amicably and peacefully in accordance with the accepted principles of international law including the 1982 UN Convention on the Law of the Sea (UNCLOS). As it is, India has joined US and other nations to press Beijing to refrain from taking any unilateral action in the disputed oceanic region.

US, on its part, has blamed Beijing for militarising the South China Sea by creating artificial islands and placing weapons and radars there. “China is trying to portray itself as a victim in the disputes because it still hasn’t gotten over what it calls centuries of humiliation when it was at the mercy of the colonial powers” says Malcolm Davis, a senior analyst at the Australian Strategic Policy Institute.

Incidentally, China has not taken kindly to the US forays in the waters of South China Sea. In recent months, US navy had sent some warships to sail within the 12 nautical miles of a disputed island in the region which is claimed by China. As diplomatic sources point out South China Sea is perhaps the first place where Chinese ambitions are positioned directly against the US strategic quest. At the end of the day, the escalating tension in South China Sea could have an unsettling effect on the long term global peace and stability. But as things stand now a lasting and permanent solution to the South China Sea appears difficult to arrive at.

…there is as yet no sign of joint, coordinated response to the rapidly consolidating Chinese position from the countries that are claimants to the resources of South China Sea.

China has left none in doubt that Beijing will not tolerate any criticism or censure of its activities in the South China Sea region. China’s Foreign Minister Wang Yihas been quick to note that “Beijing does not accept criticism from others when we are merely building facilities in our own yard”. China is quite vocal that the construction activities in the islands and reefs of South China Sea are aimed at making available international public services including maritime search and rescue. Disaster management that covers both disaster prevention and mitigation as well as marine science and research. Other benefits that are claimed to accrue from Chinese activities include weather watch, environmental protection, navigation, safety and fisheries production. The meaning and message of the Chinese claim is that all its activities in the disputed South China sea are peaceful and fine tuned for the betterment of the international community.

China seems to be expanding its presence in the waters of South China Sea in a steady and phased manner. At about the same time Chinese belligerence and assertiveness in the South China Sea region is very much in evidence. The pity is that there is as yet no sign of joint, coordinated response to the rapidly consolidating Chinese position from the countries that are claimants to the resources of South China Sea.

One thought on “South China Sea on the Boil Again”