Sino-Japanese relations on an optimistic track? 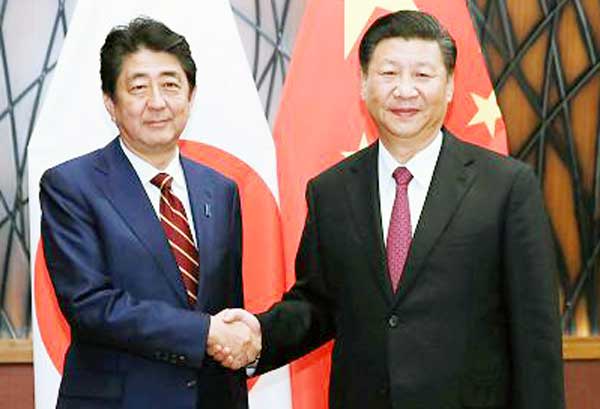 In recent months, there have been many indications suggesting that the top leaders of Japan and China are inclined to bring about a turnaround in their bilateral relations. The deepening nuclear crisis on the Korean Peninsula and  President Donald Trump’s unpredictable policy postures including his emphasis on economic protectionism have caused considerable concerns in both Japan and China. Tokyo believes that China holds the key to easing the tensions created by North Korea’s relentless nuclear and missile tests. Likewise, both Japan and China have shared interests in the prevalence of the globalization processes in the world.

On 22 January 2018, Prime Minister Shinzo Abe’s major policy speech at the Japanese Diet clearly outlined Japan’s diplomacy in the New Year. Apart from stressing the centrality of Japan’s security alliance with the US, what stood prominently in the address was his eagerness to improve relations with China. He stated that both Japan and China shared “significant responsibilities for the peace and prosperity of the Indo-Pacific region” and that they would “fulfill the expectations of the global community by deepening our friendly relationship in a stable manner from a broad perspective.”  Abe also expressed his willingness to work with China to meet the growing infrastructure demand in Asia. A leading Japanese daily Nikkei interpreted that Japan would be ready to participate in China’s Belt and Road Initiative.

Though the warm and friendly references to China are rather unusual, analysts who are following the bilateral relations carefully are not surprised and they see many indications pointing to the keenness of both countries to have a thaw in their relations. The fact that the year 2018 marks the fortieth anniversary of the Treaty of Peace and Friendship provides an opportunity for them to gradually resume their normal relations. Abe in his Policy speech has indicated how exactly he would like to improve bilateral relations by holding a series of high profile visits in 2018 and 2019 and “elevate the Sino-Japanese ties to the next level.”He hopes to host the long pending Japan-China-ROK summit as early as possible. Following this, he himself would like to visit China and pave the way for President Xi Jinping’s visit to Japan. Further, Abe is also keen to enhance exchanges between the two countries at all levels including business, culture, tourism and sports.

Are Japan and China really warming up to each other? Several incidents in the recent past could be cited to support this theory, but one should not gloss over the underlying bilateral differences on several issues including the Senkakus, (Diaoyu) , Taiwan,  approaches to the North Korean issue, and freedom of navigation in the Indo-Pacific. Still one has to recognize that Abe’s meetings with Xi and Li  Keqiang in November 2017 on the margins of the APEC meeting in Vietnam and East Asian Summit meeting in Manila respectively opened a “new era” in the bilateral relations  as they held out a hope for resuming normal relations.

During mid-December 2017, Chinese Foreign Minister Wang Yi made warm comments on the need for better bilateral relations. He said, “We value the recent steps Japan has taken to improve ties with China and welcome Japan’s participation in the BRI Initiative. We are ready to work with Japan to bring the bilateral relations to normal at an early date.”

Abe followed it up by sending Toshihiro Nikai, Secretary General of the Liberal Democratic Party to Beijing to meet the top leaders of China. Nikai who enjoys the confidence of the Chinese leaders told them that the present time was most propitious for both countries to advance their relations under the strong leadership of both Abe and Xi.  He met Xi on 28 December, and invited him to visit Japan at an early date.  While Xi appreciated the “warm and pro-active attitude” of Abe, he did not make any commitment on his visit to Japan.

In order to maintain the tempo following the 22nd January speech, Abe sent TaroKono, Japanese Foreign Minister to Beijing  on 27-28 January to pursue the prospects of arranging high profile trips to Japan by Li Keqiang  and Xi. Kono found Wang Yi, Yang Jiechi, State Councilor and Premier Li quite appreciative of Abe’s objectives, but they were not making any clear commitment on the trilateral meeting which Japan proposes to hold in April.

Koo-Wang talks also revealed the underlying mistrust between the two countries on certain issues. For instance, China urged Japan to show its strict commitment to one China policy. Further, they told Kono that Japan should consider China as a partner and not as a rival and that China’s rise more an opportunity than a threat. For his part, Kono referred to an incident on 11 January in which a Chinese military submarine entered the East China Sea waters near the Senkaku Islands. Kono urged that strong measures should be taken to avoid the recurrence of such incidents. Both Kono and Wang agreed to make efforts to create and implement a maritime and aerial communication mechanism in the East China Sea for stopping any accidents.

If Abe wants to hold a trilateral meeting in Tokyo soon, he should also ensure the visit of South Korean President Moon Jae-in. But considering the present state of Japan-ROK relations marred by the revival of the comfort women issue, it may not be easy for Moon to make a visit to Tokyo. ROK’s foreign minister Kang Kyung-wha went to Tokyo during early January, to modify the terms of the December 2015 agreement, but Japan has categorically rejected it. It appears that the comfort women issue will continue to strain Japan-ROK relations given the strong positions taken by both countries. There is little doubt that the strained relations between Tokyo and Seoul will delay the trilateral parleys.