Simulation and Training: The IAF Perspective 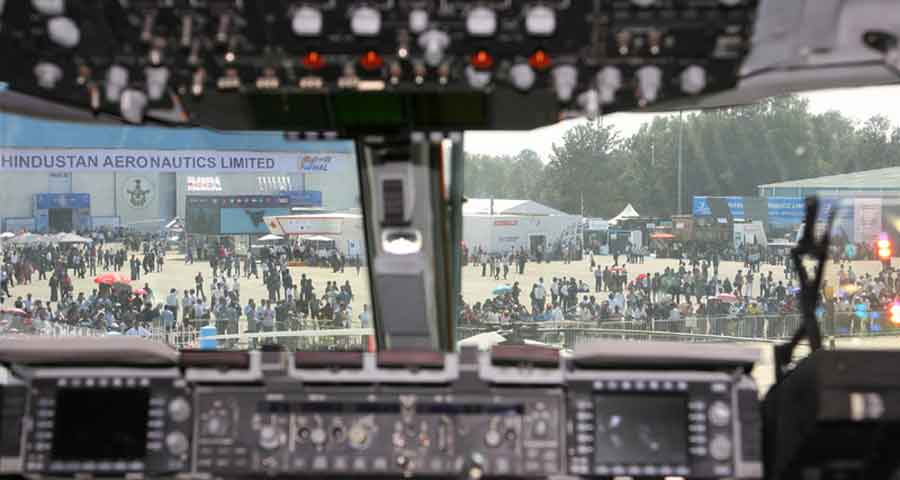 Aero India 2013 view from the cockpit of C-17 Globemaster

“Simulators go a long way in ensuring that a pilot learns about systems under simulation before he actually uses these on-board an aircraft thus saving precious flying hours. Apart from simulators being inducted with the new aircraft being contracted for, the IAF has taken a conscious decision to include simulator training as part of the curriculum for ab initio training of pilots.”

“Simulation” implies an imitation of a real-life process usually with the help of a computer or other technological devices, in order to provide a life-like experience. This has proven to be a very reliable, successful and a low-cost option for training not just in the militaries worldwide, but even in the corporate world. It is important to emphasise that training simulation is not just a glorified video game but its aim is to train and educate to develop skills that would be used when faced with a similar situation in real life.

The rationale for providing simulators in the domain of military training is obvious. Given the rising costs and increasing complexities of aircraft and other weapon platforms, there is a requirement for infrastructure and resources to provide real life situations with a facility to record and analyse the performance of trainee. Simulators can bring realism to training where none exists, not just for the training of an individual but an entire team. The simulator is a special category of training device that can replicate all or most of the functions of a system. Simulators can, therefore, be used to train operators in various skills while preserving the primary equipment for operational use.

The association of the Indian Air Force (IAF) with simulators is not new. A rudimentary simulator known as a Link Trainer was in service many decades ago to introduce pilot trainees to instrument flying in the Intermediate Stage of training now termed as Stage II. It was equipped with air bellows to provide roll and pitch inputs and an electric motor which, while rotating the platform, provided the yaw cues. The cockpit was fully covered and the layout was generic. Apart from the Link Trainer, the pilot trainee was introduced to the Ejection Seat Simulator, which besides being used for medical evaluation, also provided a near realistic experience of ejection from an aircraft. On commissioning, when the young pilots moved to the Operational Conversion Unit, they had their first introduction to an aircraft simulator, the Hunter Simulator, which had the complete cockpit layout, could simulate a complete sortie profile and even provided sound effects.

Thereafter, pilots got the opportunity to train on the simulators of combat aircraft such as the MiG 21 or Su-7. Today, the IAF has graduated to the Hawk Simulator as also Flight Training Devices for the AN-32 and Do-228 in the basic training stages. Thereafter, pilots are exposed to other highly technologically sophisticated simulators such as for the C130J multi-engine transport aircraft. Apart from flying training the IAF has simulators for training of vehicle drivers, medical personnel, radar operators, basic and advanced training of Air Traffic Controllers (ATC) as also for war-gaming, weapons and combat training, to mention a few. Apart from simulators for training in the IAF, the Indian Navy has a Disaster Training simulator at its base in Lonavala. This simulates the flooding of a ship while experiencing severe pitching and rolling movements.

So why are Simulators important? The answer is ‘training’ of the man behind the machine. With the modernisation of the Armed Forces and the induction of ‘superior class’ of platforms and weapons where one can feed the coordinates of and engage the target in the operational area with a high degree of accuracy from the safety of location thousands of kilometres away and tracking the enemy on a TV screen. The man behind the machine is the actual war machine, driving tanks, manning ships or flying aircraft. He has, therefore, to be trained to be not only physically strong but also mentally sound with all-round training to be able to adapt to any situation that may arise in the course of operations.

The man behind the machine also needs to train to fight unseen enemies. While the nature of war may not have changed, the conduct of war has definitely undergone a transformation. Modern day simulators, with rapid developments in computer science, can paint near-real scenarios and much more. Simulators provide an opportunity to rehearse procedures for even the most unforeseen contingency, be it in flying or in other types of ground-based operations. It also provides the opportunity to train by day and night, irrespective of weather conditions.

Another advantage of the simulator is the cost factor. Flying training has always been an expensive proposition with platforms and weapons becoming prohibitively expensive. Flying an empty aircraft purely for training is a luxury that the IAF can no longer afford. The Russians have been known to comment adversely on the training of pilots by the IAF on the IL-76 aircraft that are flown empty for this purpose consuming eight tonnes of precious Aviation Turbine Fuel every hour. Aircraft are costly machines; even more costly to operate. Every time an aircraft takes to the skies, be it for an operational mission or a routine training sortie, there is the need for associated specialist equipment and technical manpower. This is apart from the large infrastructure requirement and deployment of personnel to man services such as Air Traffic Control, Safety Services and Radio Navigational aids. The man-hours involved, wear and tear on the equipment and consequently, cost can be reduced to a large extent if part of the training is shifted to simulators. This following table illustrates the exorbitant costs of aircraft and of training. 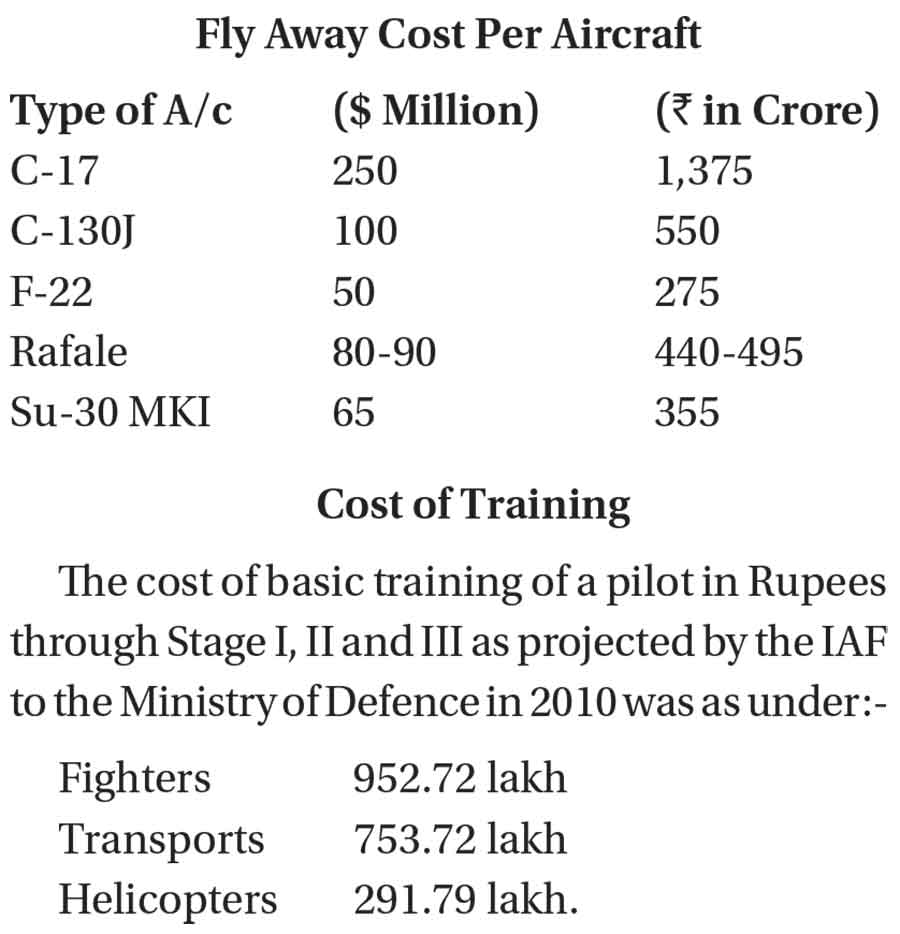 The advantage of simulators is that aircrew continue to gain valuable training at a fraction of the cost and without the risk of losing lives or machines. To cite an example, the newly acquired C-130J costs Rs 12 lakh per hour to operate, while the operation of its simulator costs only Rs 25,000 an hour. It is, therefore, an issue of doing more with less.

The advantage of simulators is that aircrew continue to gain valuable training at a fraction of the cost.

The Kiran aircraft, presently being employed as the basic trainer for ab initio and Stage II training for the budding fighter pilots, is supported by a Pilot Procedure Platform (PPP) and a Cockpit Procedure Trainer (CPT), both poor cousins of a simulator. These are fixed platforms meant primarily for practising procedures. On the other hand, in Stage III, the training syllabus on the Hawk Advanced Jet Trainer is divided into two semesters. The schedule has simulator training embedded from the first semester itself and consists of 30 per cent of the training in assessed sorties. This simulator is far more sophisticated than that for the Kiran aircraft but is still not a full motion simulator; the ‘motion’ is provided on large screens through computer-generated videos which are realistic and permit full sortie profile to be simulated. For the training of transport pilots, the IAF has a Flight Training Device (FTD) one each for Do-228 and An-32 aircraft. These are somewhat similar to the Hawk Simulator but the sorties are not assessed as the quality of simulation is nowhere close providing realistic feel of flying.

The first full motion simulator that the IAF now has is that of C-130J. This is a high-fidelity, six-axis, full motion, electrically operated simulator that is capable of initial pilot training as well as operational training. With this induction, a new era in the use of simulators in the IAF has been ushered in with the entire training i.e. initial conversion, operational training, check sorties and continuation training being flown on the simulator. It has been set up at a cost of $46 million, just a shade less than half the cost of a new aircraft. The cost however, can only be recovered if the simulator is exploited to its maximum capacity and utilised for all exercises and role clearances, as is done in the US. For operational training on fighter aircraft, the IAF has mission simulators, but the numbers are limited. Consequently, operational training continues to be carried out through actual flying, a very costly proposition indeed. Delay in acquisition of additional simulators required may be attributed to the traditional mindset of hands-on flying training, high initial investment and lack of appreciation of the benefits of simulator training or a combination of all. The situation is however, changing for the better with new simulators on the anvil. Due importance is now being given to simulator training both in the initial training phases and for continuation training.

One thought on “Simulation and Training: The IAF Perspective”