Self Reliance Index and the Enduring Legacy of Kalam 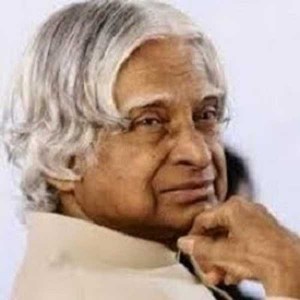 In a perceptive article in the Economic Times (31st July) Prof. Bharat Karnad, while paying fulsome tributes to Dr. APJ Abdul Kalam for his contribution to long range delivery systems like Agni series of ballistic missiles, has bemoaned the fact that the Defence PSUs have never progressed beyond the “Screw Driver” technology. He has specifically brought out, how the aeronautic behemoth HAL has alarming import content (70%) in its Value of Production during 2014.

Prof. Karnad has suggested that there is a need to stop “mollycoddling the DPSUs”, avoid wasting sophisticated built up capacity in the private sector and contain our humongous import drain.

… “technology power will raise the nation to a position of greater strength militarily and economically”.

This article seeks to look at the trend of our capital acquisition, its import content over the years & import content of HAL, the broad recommendation of the Kalam committee on improving our Self Reliance Index, policy architecture since the winds of liberalization wafted into the defence sector and the way forward to realize the legacy of Dr. Kalam.

Capital acquisition for various platforms, weapon systems has significantly increased over the years, i.e. seven fold from the level in 2000-2001. It constitutes broadly 40% of our defence budget. As per the Defence Services Estimates, the import content is nearly one third in recent years. However, a major defence PSU like HAL, imports nearly 70% of its requirements, drawing criticism that it is predominantly an ‘assembler’, ‘systems integrator’ rather than a ‘value adder’. The following table provides the trend. 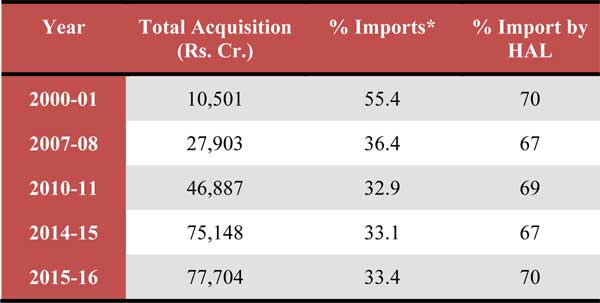 However, the importation figures* in recent years masks the imports being done by the private sector and public sector undertakings under Buy and Make (Indian) & Buy & Make categories.

Kalam Committees on Self Reliance

A committee under Dr. Kalam, the then SA to RM with representation from the three services, defence production, gave far reaching recommendations on 27th Oct 1993 how to indigenously develop critical key technology as a safeguard against denials by developed countries. The report concluded by suggesting that “technology power will raise the nation to a position of greater strength militarily and economically”.

During an interview to Arnab Goswami in (2015), Dr. Kalam alluded to these aspects as much as he averred that the two major milestones in India are (a) our economic liberalization in the 1990s and (b) nuclear and missile power. For him unless India stands up to the world, no one will respect us. “Only strength respects strength”, is what he firmly believes.

The Committee had underscored the need to improve our self reliance quotient from 30% in 1992 to 70% by 2005. The following figure brings out the expected trend of indigenization with full TOT realization.

The success of Prithvi, Agni & LCA programmes are testimony to this vision.

While the DRDO Chief grandiosely assured the Parliamentary Committee in 2012 that the SRI has improved to 40%, the ground reality is quite disheartening in terms of sensors and propulsion, where we are still 90% dependent on imports. For instance, for the much vaunted indigenous Light Combat Aircraft (LCA) programme, critical subsystems like MMR (Multi Mode Radars), Aero Engine, Carbon Fibers required for its structure and stealth capability would be fully dependent on imports.

One of the highlights of this report, is the need to create a Self Reliance Implementation Council (SRIC) to be headed by the SA to RM with the three Vice Chief of the services and Secretary (DP) as members to ensure that the goals of self reliance are monitored regularly and effectively. This was based on similar experience in Russia where the Sukhoi Design Burear (SDB) drives the aeronautical programmes in sync with the production houses.

After the Kargil experience, the GoM (2002) recommended creation of an acquisition wing, integration of SHQs with MoD. FDI upto 26% was brought in 2001 which now stands at 49% (2015). Increase in private sector participation, providing level playing field, creation of RURs (Raksha Udyog Ratnas) out of the private sector was recommended by Kelkar (2005). The Sisodia Committee (2009) has called for Integrated Acquisition structure as in DGA France. The Rama Rao Committee (2008) called for replicating DARPA like structure of USA for DRDO and greater involvement of the Services in project implementation.

The Make procedure also promises 80% funding to the private sector entities at the prototype stage. The progress in this regard has been pathetically slow.

The subsequent Committees like the Naresh Chandra Committee (2012) and NMCC Committee (2011) have highlighted the need to integrate defence manufacturing sector with the overall manufacturing initiatives in the country. Needless to say, there are many dual use items, particularly in the aerospace and ship building sector, where a synergy between the defence manufactures and National Manufacturing Zones can really bring in significant economy of scale, cost effectiveness and excellent export potential.

It’s a real tribute to Dr. Kalam that he ran all his mega programmes in a Mission Mode involving universities, academia, private sector industries and production organizations as partners. The success of Prithvi, Agni & LCA programmes are testimony to this vision. The Joint Venture with Russia (Brahmos), Joint Design and Development of MR-SAM (France) are his enduring legacy. The FGFA programme involving joint collaboration for design, development, production and marketing with Russia is also significant initiative to bolster our footprint globally in building stealth aircrafts.

This Defence Production Policy (2012) for the first time underlined the need to achieve “substantive self reliance in R&D and production of platforms” in an early timeframe, broaden defence R&D base of the country. It has suggested simplification of ‘Make’ procedure and set up fund to provide resources to private sector, SMEs, academic and scientific institution to support R&D of defence equipment in cutting edge technology.

A strong political will and mentoring would bring make a country self reliant instead of the present thrust on catchy rhetoric.

The Make procedure also promises 80% funding to the private sector entities at the prototype stage. The progress in this regard has been pathetically slow. A case in point is Technical Communication System (TCS) needed to integrate communication upto unit level. It’s only after seven years; the Make project is making some headway in terms of ordering prototype on a defence PSU and private sector.

It would be in the fitness of things to mention about the Subramanian Committee (1963), after the 1962 debacle. With JRD Tata as member this report had brought out that our knowledge base in design was inadequate compared to the requirements in the fast changing aerospace sector. They had accordingly suggested that joint design and development of aircraft engine should be pursued with reputed engine manufacturers like GE, Rolls Royce and Snecma. India’s misadventure to do it alone by GTRE and the failure of the Kaveri engine program for LCA should provide adequate lesson how we need to be pragmatic in such strategic programmes.

Incidentally it may be pointed out that the investment by DRDO, Defence PSUs and the Private Sector in R&D is pathetically low compared to global levels as the following table would show. 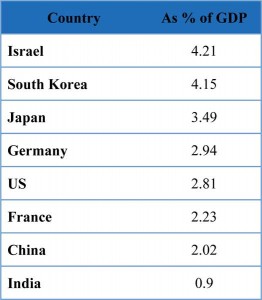 However, it’s not the quantum of investment but the quality of synergy that we build with academia, private sector and DRDO that would be the key to improving our design capability in key technologies.

Dr. Kalam, had a childlike delight for indigenous innovation. Once in aero show (1998) when everyone was waxing eloquent about the man oeuvres of SU-30 he was jumping with a joy when our ingeniously designed parachute dropped like a dream.

All the critical technologies identified by the committee in 1993 holds insuperable challenge even two decades later. DPP 2013 would show how we have miles to go in technologies like Nano technology, SAR, FPA, Carbon Fibers, High Power Leasers, THZ Technologies, precision guided munitions. Our design capability in these riche technologies is quite poor and remains an enduring challenge.

…suggested that joint design and development of aircraft engine should be pursued with reputed engine manufacturers like GE, Rolls Royce and Snecma.

Prof. Karnad’s sweeping broadside on HAL will not bring the success in critical technology. A strong political will and mentoring would bring make a country self reliant instead of the present thrust on catchy rhetoric.

I clearly remember how when the Parliamentary Committee (1998) recommended 10% of Defence budget should to be allocated to DRDO as against a historical 6%, Kalam was reticent. He told them that, mere augmentation in budget would not increase design and research capability. A synergy between academia, private sector, production organization, globally respected original equipment manufacturers, and design houses is what is needed.

In a turbulent world where equilibrium is the key (Kissinger) and technology denial the norm, improving our knowledge base and all stakeholders putting their heads together into the programme instead of fighting turf war, accepting failure as the mother board of success is how Dr. Kalam would envision India’s  tomorrow. To quote him “The whole universe conspires to give the best to those who dream and work”. We need to seize them with both hands.