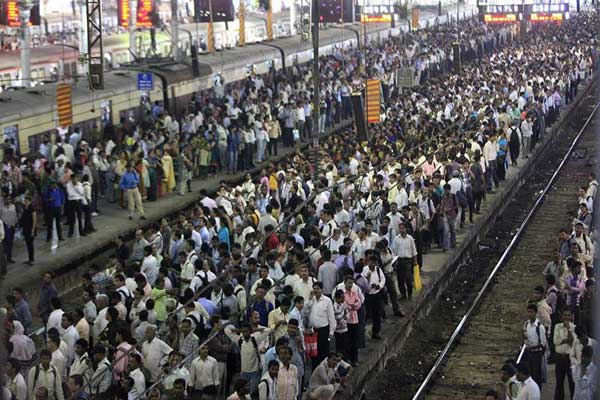 Apart from other reasons several media reports attribute the stampede at the Eliphistone footbridge to rumours. The Hindustan Times reports : “Two rumours began circulating, which most likely caused commuters to panic, survivors said. One rumour, a survivor said was of short circuit.” The other rumour as usual was about the collapse of the bridge.

…rumour bombs are corroborated by victims of stampede who managed to stay alive. Only a sick mind would not give credence to the eye witness accounts.

Intriguingly, the stampedes in public places, particularly at choke points, coincides with the trajectory of jihadi terror in India. The phenomenon gets more acute between August and October, in and around Dushhera period, when religious festivities are most intense.

In Oct 2005, some 33 people were killed in stampede in Patna’s Gandhi Maidan during Dushhera celebrations. Some people masqueraded a broken cable TV wire as explosive device. Hence it was a carefully planted rumour that triggered the stampede.

Just as now, during the same period of the year, rather on the very first day of the Navratra in 2008, planted rumours of bomb blast, caused stampede in Chamunda Devi temple in Jodhpur. As per official figures 224 devotees were killed and 425 injured.

Only a month before, in August 2008, in Naina Devi temple complex in Himachal Pradesh, bomb and landslide scare—purely fabricated, triggered a massive stampede resulting in the death of 146 pilgrims.

It may be underscored that the year 2008 had intense jihadi terror narrative, culminating in 26/11.

Yet another Dushhera that was blemished by stampede owing to planted rumour was in Oct 2013 in the Ratnagarh Mata temple in Madhya Pradesh. This too was on a bridge and the rumour that was triggered was that the bridge was about to collalpse. 91 devotees were killed in this stampede.

Varanasi, PM’s constituency had its Dusshera tragedy in 2016. In Oct that year a rumour of Rajghat Bridge collapse killed 24 people.

Rumours of presence of a suicide bomber triggered a massive stampede on Al-Aaimmah Bridge in Baghdad.

There is one strain common in all these tragedies i.e. the facet of rumour or euphemistically speaking ‘rumour bomb.’ Invariably these rumour bombs are corroborated by victims of stampede who managed to stay alive. Only a sick mind would not give credence to the eye witness accounts. What is of concern is the alacrity with which these rumour bombs are employed. Obviously the person who is likely to be a fatal victim of the rumour will desist from employing it. Rumour bombers have to deploy themselves at a safe yet credible distance from the target, otherwise the rumour bomber will be a suicide bomber.

The havoc that mix of rumour bomber and scare of suicide bomber can cause was witnessed in Iraq in Sep 2005. Rumours of presence of a suicide bomber triggered a massive stampede on Al-Aaimmah Bridge in Baghdad. At the time of the stampede one million pilgrims had congregated around the Al –Khadmiya mosque. 950 Shia pilgrims who were marching towards the mosque were killed. Many of them jumped into the Tigris River. An Al-Qaeda affiliated group claimed responsibility. The then Interior Minister of Iraq said : One person pointed finger at another person saying that he was carrying explosives and that led to panic.’’

Three things clearly emerge from the Baghdad Bridge incident. One, that jihadi groups are not averse to employing rumour bombs. Two, the ease with which stampede can be caused by rumour bombs. Three, an atmosphere of anxiety has to be created for rumour bombs to have maximum impact. This is achieved by endemic acts of physical terrorism. Mumbai or India as such, like Iraq, certainly suffers from high anxiety quotient because of unrelenting acts of indiscriminate terrorism perpetrated on unsuspecting masses by the jihadi groups over one-and-half decades.

The antidote to rumours is general awareness about the methods and potential of rumour as a weapon and its symbiosis with jihadi terror and politics.

In June this year in a stampede during a Champions League in a football final in Turin in Italy,1500 people were injured. The stampede was triggered by a loud noise whose source could not be determined. In a statement the Turin Perfect said:’’ the crowd was taken by panic and psychosis of a terror attack—-.’’ This panic reaction in the crowd in the ultimate analysis was because of the series of jihadi terror attacks, all over Europe. This is how physical attacks by jihadis and rumour bombs complement each other. In fact a rumour bomb under unmitigated terror environment can cause far more damage than actual bomb. A natural corollary to this is that inimical intelligence agencies and anti-national politicians and political parties have no qualms in using rumour bombers for political ends. Many of these stampedes are triggered in consonance with high profile political developments or to negate country’s strategic and geopolitical interests and achievements.

It is said that rumours which essentially are based on half-truths or complete lies is the most malignant virus that can afflict a nation. The antidote to rumours is general awareness about the methods and potential of rumour as a weapon and its symbiosis with jihadi terror and politics. People need to be sensitized about likely targets and timings of rumour bombers. Politicians of anti-national variety will always ridicule the ‘rumour bomb’ facet of terror because they stand to gain the most because of its innocuous veneer and deniability. This author encountered one such Dawood-linked politician in a television debate after the Eliphistone bridge stampede. He was clearly rattled by mere suggestion of ‘rumour bomb’.

If rumours can be managed or killed, stampedes can be averted. One such instance was at Gandhi Maidan in Patna in 2014 during Mr Modi’s rally. A crowd of more than five lakhs was in attendance. Just prior to his arrival on the venue, wherein this author was present, there were series of low intensity blasts, at five minutes interval, in a clockwise direction. The objective was ‘stampede’. The leaders present on the dais averted it by wisdom and cold courage. They were successful in conveying to the audience that the explosions were nothing but mere display of happiness and enthusiasm by fireworks. Though they knew the reality, but the weight of their wisdom and words spoken from the dais prevailed. The reality could have given way to rumours, causing humongous disaster. Mr Modi too persisted with his programme and maintained an unruffled demeanour all through his speech, as if nothing had happened.

We need to reflect on the latest terror attack in a concert in Las Vegas. Musical concerts have been the target in Europe for some time now by the jihadis.  This kind of terrorism creates the atmosphere of fear and anxiety. In this terror environment even a small rumour or incident can spark off ‘stampede’. Thus, terrorism is even killing music amongst humans.