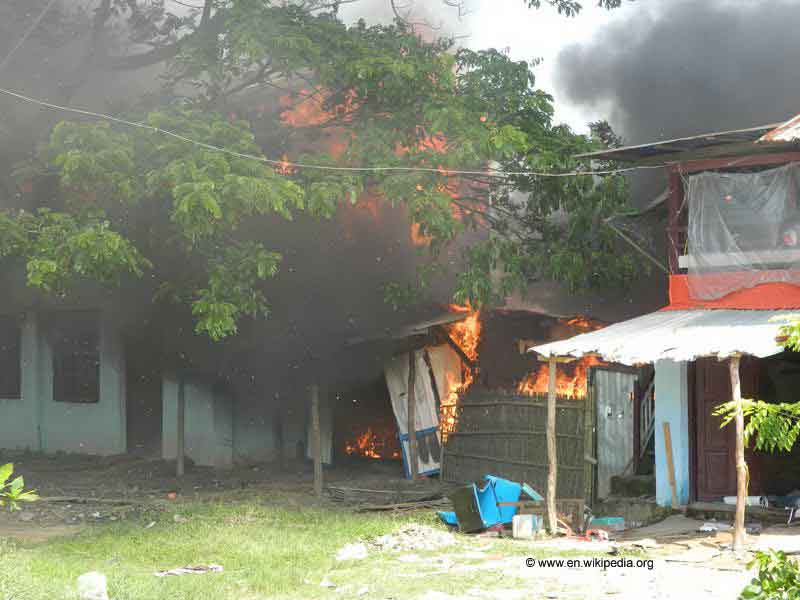 The Indian subcontinent had to confront an ideological falsehood called ‘Two Nation Theory’ denting the national consciousness at the time when the national movement was entering its last phase of battle against the British colonial rule. The protagonists of this ideology in 1940 had demanded a separate country for the Muslim majority regions keeping in mind , however, only the interests of Punjabi Muslims and some of the Nawabs of East Bengal and had no vision for the Muslims living in Hindu or Buddhist majority area. The protagonists of ‘Two Nation Theory’ did not consider the Muslims of the other parts of Indian subcontinent of any worth and probably had not even heard of Rohingya Muslims.

Incidentally, Arakan Muslim League had also launched a separatist movement for the Rohingya Muslims echoing the same ideology and at the same time in Burma which happened to be a province of British India till 1948. As the formation of East Pakistan appeared certain, the Rohingya Muslims sought the incorporation of the Mayu region in West Burma, where they had been living since 12th century, into East Pakistan. However, Muhammad Ali Jinnah refused to accommodate the Rohingya Muslims in East Pakistan, a country ostensibly created for Muslims. This turned the members of Arakan Muslim League towards a radical fight for self-determination that continues till this very day. Had All India Muslim League championed the case of its Arakan counterpart, the political struggle for a Muslim homeland in Burma would not have metamorphosed into militant radicalism.

Pakistan’s further compounded the problems of the Rohingya through ‘Operation Searchlight’ synonymous with genocide and mass rape in East Pakistan in 1970 This was a brutal assault to suppress the Bengali self-determination leading to a mass exodus of Muslims from East Pakistan into Burma ushering to a kind of “demographical change”. This disturbed the Rakhine monks who after a decade of hunger strikes and aggressive Buddhist propaganda, managed to strip the Rohingya of their citizenship in 1982.

Rohingya Muslims are an ethnic group living since 12th Century in Myanmar. However, they are not considered as one of the country’s 135 ethnic groups. During the British rule between 1824 to 1948, many labourers moved to Myanmar from Bangladesh, much to the resentment of majority Buddhist population. Shortly after Myanmar’s independence from the British in 1948, the Union Citizenship Act was passed, defining which ethnicities could gain citizenship and the Rohingya were not included. The act, however, did allow those whose families had lived in Myanmar for at least two generations to apply for Identity cards. After the 1962 military coup in Myanmar, all citizens were required to obtain national registration cards. The Rohingya, however, were only given foreign identity cards, which limited their jobs and educational opportunities.

In 1982, a new citizenship law was passed, which effectively rendered the Rohingya as Stateless as they were again not recognised as one of the country’s 135 ethnic groups. The law had established three levels of citizenship. In order to obtain the most basic level (naturalised citizenship), there must be proof that the person’s family lived in Myanmar prior to 1948, as well as fluency in one of the national languages. Many Rohingya could not produce the necessary documents. The Rohingya Muslims in Myanmar cannot vote as of today and even if they get the citizenship, they will be called only as “naturalised“ with limits on them entering certain professions like medicine, law or running for office.

Now even Bangladesh, the successor of East Pakistan, has not done any better for the Rohingya Muslims. Bangladesh, no doubt, has given shelter to Rohingya refugees from Myanmar in the year 1978, 1991, 2012 and 2016. But it is now hosting around 5,00,000 Rohingyas in camps in Cox’s Bazar along Bangladesh’s southeast border with Myanmar in cramped and unsanitary conditions of makeshift homes, with little access to clean drinking water and proper food. The 1951 Convention Relating to the Status of Refugees and its 1967 Protocol relating to the Status of Refugees are two major international instruments under International Refugee law. Again the 1954 Convention relating to the Status of Stateless Persons and 1961 Convention on the Reduction of Statelessness are two other major international instruments that were adopted by the world community to protect the rights of stateless people worldwide. Though Bangladesh is not a party to these major refugee law instruments, it is still obliged to provide shelter and protection to Rohingya under the ‘Principle of non-refoulement’ and in no way it can avoid its obligation.

The principle of non-refoulement is the cornerstone of asylum and of international refugee law. Following from the right to seek and to enjoy in other countries asylum from persecution, as set forth in Article 14 of the Universal Declaration of Human Rights, this principle reflects the commitment of the international community to ensure to all persons the enjoyment of human rights, including the right to life, to freedom from torture or cruel, inhuman or degrading treatment or punishment, and to liberty and security of person. These and other rights are threatened when a refugee is returned to persecution or danger. Bangladesh has an obligation to ensure that the basic human rights of Rohingya are respected while they are in temporary asylum by ensuring equal protection of law and access to essential services, e.g., food, education and housing.

Sadly, these obligations have not always been complied with and the reasons for the non-compliance point to the limits of international refugee law. Bangladesh has already breached this obligation on several occasions, e.g., the 1992 expulsion and boat turning incidents of Rohingya in 2012 and 2016 from Bangladesh. The Bangladesh government has been accused of withholding food aid and of punitive restrictions on international organisations providing lifesaving humanitarian aid. It has recently taken a decision to temporarily resettle thousands of Rohingya in the Thengar Char Island situated in Hatiya Island in Noakhali. According to the UNHCR, relocating them from Cox’s Bazar to this island would deprive them of their rights to freedom of movement, livelihood, food and education. This 6,000 acres island is not worth living as it is situated in more than 37 miles away from the mainland. It is officially uninhabited and completely inundates during the monsoon.

As a policy, Pakistan has no concern for the Rohingya Muslims, but would like to use them as the victims of ethnic cleansing and to sketch out a “world against us” picture that fuels Islamo-fascist jingoism. Beginning from the 1948 annexation of Baluchistan, to the Second Constitutional Amendment of 1974 to excommunicate the Ahmadiya community, Pakistan has a special contribution in occupying regions and fuelling bigotry against communities in the Indian subcontinent. Pakistan is a State that is overseeing ethnic cleansing in its largest province of Baluchistan and has consented to genocide against a Muslim sect by sanctioning apartheid through the Constitution. It has no moral right to speak for another Muslim community being persecuted thousands of kilometres away. Even the Rohingya living in Karachi in Pakistan either don’t have an identity card or they are registered as ‘Bengalis’ which is precisely what the Myanmar government is doing to the Rohingya i.e. forcing them to register as Bengalis relinquishing their status as inhabitants of Burma since the 12th century. The world has seen as to how defective the whole idea of two nation theory was, as Pakistan could not even accommodate those Muslims who wanted to join their newly created country. The unresolved issue of Rohingya Muslim is a gift of Pakistan to the Muslims of the Indian subcontinent and a reminder to the world that the boundaries drawn on the ground of religion do not always resolve the crisis and rather exacerbate it very often. Religion is no guarantee of getting protection from the countries created in the name of the same religion, be it Pakistan or Bangladesh.