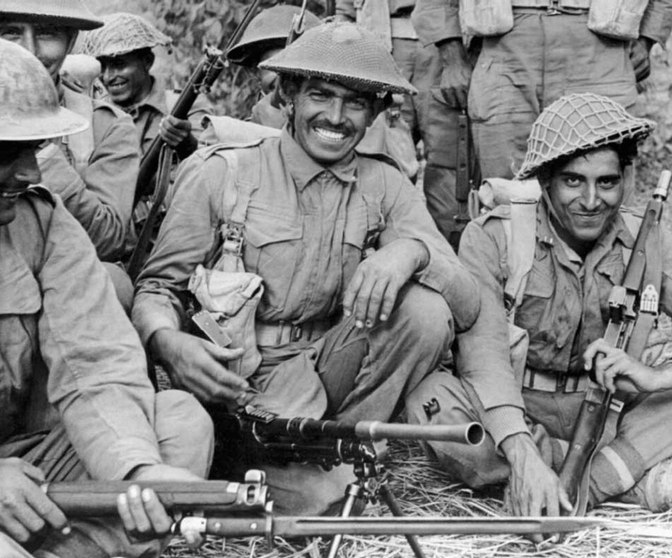 Seventy-five years ago, Paul Warfield Tibbets Jr. piloting a B-29 Superfortress – Enola Gay – dropped ‘Little Boy’, the first atomic bomb on the Japanese city of Hiroshima on 6 August 1945 which was followed by ‘Fat Man’ on Nagasaki on 9 August 1945 by Charles W Sweeney piloting the Bockscar. Japan announced its surrender on 14 August and formally signed the instrument of surrender to the American General MacArthur on board the USS Missouri in Tokyo Bay on 2 September and to the British Admiral Mountbatten at the Town Hall, Singapore on 12 September 1945. Germany had surrendered on 7 May 1945.

Seventy-five years later, the Indian contribution in the war effort is largely forgotten. Unlike post World War I, when Imperial Britain raised the India Gate at Delhi to commemorate the 74000 Indian soldiers dead of that War, Indian Independence and new found nationalism found no commemoration of the over 87,000 Indian servicemen dead, 34,354 wounded, and 67,340 prisoners of war. The Indian Army,and the other two services, were forgotten. Also forgotten is its contribution to Indian independence.

But how can we forget, notwithstanding it was Imperial Britain’s war. As Yasmin Khan wrote in The Raj at War, ‘Britain didn’t fight the Second World War, the British Empire did,’ and more importantly by fighting for the Empire the Indian Army also spelt the end of the Empire. Our desire to break free from our colonial past cannot wish away history. Perhaps the 75th Anniversary of the end of the war is long enough to be secure about our nationalism and guilt free of our colonial experience to remember and acknowledge.

In September 1939 the Indian Army totalled 1,60,000 including 16,000 British officers and men, and another 72,000 with the princely states. The Navy had 1,700, and the Indian Air Force one squadron with 200 officers and men. By the end of the war in 1945, the Indian Army had increased to more than two and a half million and was the largest all-volunteer army in the history of human conflict. That aside, like the critical initial days of the First World War, the Indian Army on more than one occasion turned the tide in favour of Britain and the Allies.

On 8 April1941, Indian forces entered Asmara in Eritrea and liberated the city of Addis Ababa from the Italians enabling Ethiopian Emperor Haile Selassie to return to his homeland. In grateful acknowledgement, Sudan and Ethiopia, later contributed money for setting up the National Defence Academy (NDA) near Pune.

The imposing main building of the NDA is called Sudan Block. Indian troops then went on to fight in North Africa to fight the first Battle of El Alamein in Egypt and be part of victory of Bernard Montgomery over Rommel in the second Battle of El Alamein in October – November 1942. Thereafter the Allies landed in Italy on 9 September 1943. After helping capture Monte Cassino and breaking through the Gothic Line, the last major line of defence, the Indian Army fought on till the German surrender on 29 April 1945.

With the sea routes blockaded by the German Navy, a land route was critical to supply Russia to keep it in the war. The Persia and Iraq Force (PAI Force), composed predominantly of Indian troops, secured the oilfields and opened the routes from the Persian Gulf to the Arctic reaches of Russia enabling Indian run convoys to deliver more than 60,000 tonnes of material.

Closer home, the bulwark of British defence of Hong Kong, Malaya and Singapore was provided by the Indian Army. The biggest contribution of the Indian Army was the Burma Campaign where it formed the bulk. Fighting a heroic rear-guard action against the invading Japanese down the Malayan peninsula nevertheless ended in the greatest British military disaster when Singapore fell to the Japanese on 15 February 1942 with the loss of some 55,000 Indians soldiers taken PsOW.

Fighting a retreating battle through Burma all the way to the eastern frontier of India the British- Indian forces finally halted the tide at Kohima and Imphal. Tokyo announced the invasion of British India on 07 March 1944 and besieged Imphal and Kohima on 04 April 1944.  The garrison held out till relieved on 20 April 1944. The siege and battle left 2337 British and Indian soldiers dead.

The Japanese invasion of India had been halted at the tennis court of the DCs bungalow at Kohima where today the cemetery is inscribed by the famous words ‘When you go home, tell them of us and say, for your tomorrow we gave our today’ and the tennis court marked with white bricks. The cemetery has 1420 burials and a memorial to 917 cremations. Like the Japanese proverb -Takane No Hana-(Something very tempting but beyond reach), the Japanese expansion towards India was thwarted by the Indian Army.

Overshadowed by events in Europe, especially the D-Day landings in Normandy on 06 June 1944 and liberation of Rome a day earlier, the critical strategic significance of the battles of Kohima-Imphal was appreciated much later. A contest run by the British National Army Museum in 2013 voted the battles of Kohima-Imphal ‘Britain’s Greatest Battles’ ahead of Waterloo 1815 and D-Day 1944. Mountbatten was to call them ‘Probably one of the greatest battles in history … the British/Indian Thermopylae.’ The Japanese were thereafter pushed back all the way to Rangoon.

By the time the war ended, civil disturbances and agitations for freedom were widespread. While the post-independence narrative was built around the political and religious imperatives as drivers for the end of British colonial rule, the unacknowledged lever was the Indian armed forces. The over 15,000 trained Indian officers and 2.5 million men with aspirations of freedom could not be ignored by the British.

The Indian National Army (INA) may not have achieved much militarily as part of the Japanese offensive of 1944, however, it had created a deep fissure amongst the officers and men of the Indian Army between those who sympathised and aligned their nationalist views with them and those who considered them as having been unfaithful to their oath and salt. The INA trials initially opened at Shimla and twenty men pronounced guilty of waging war against the King Emperor were executed at Attock. This went largely unnoticed. But when they shifted to the Red Fort Delhi, the symbolism was not lost. The consequent national uproar and rumblings within the Army against the trials revived the spectre of 1857.

The beginning of 1946 saw mutinies in the Royal Indian Navy (RIN) at Bombay, Royal Indian Air Force (RIAF) at Bombay, Kanpur, Allahabad and Jodhpur and Army at Jubbulpore. The bigger princely states with their own military and ideas of regaining independence from British suzerainty only added to the conundrum. Viceroy Wavell in a dispatch addressed to King George VI on 22 March 1946, wrote: ‘The last three months have … by a mutiny in the RIN, much indiscipline in the RIAF; some unrest in the Army…. ‘

The British Cabinet Mission and the Viceroy negotiating Indian independence with the political parties concluded that in case of failure to reach an agreement leading to outbreak of violence, and with the Indian Army unlikely to help suppress it, Britain would not be able to hold on.

The British Chiefs of Staff noted ‘….we consider that the reliability of the Indian Army as a whole, including those in garrisons outside India is open to serious doubt. This applies even to Gurkha units….The Royal Indian Navy and the Royal Indian Air Force cannot be regarded as reliable’. And concluded that ‘….A policy of remaining in India … we would be faced with the necessity of providing five British divisions for India, with the consequent abandonment of commitments in other areas hitherto regarded as inescapable, ….and world-wide repercussions on the release scheme. The only alternative to this would be ignominious withdrawal from the whole of India.’ In any case the war weary British soldiers were looking forward to de mobilisation and were not willing to be re deployed.

On 20 February 1947, the British Government announced its intention to transfer power not later than June 1948. Lord Mountbatten, the new Viceroy arrived on 22 March with the simple brief to ‘Get Britain out of India’. On 03 June, he announced the partition of India into the Dominions of India and Pakistan by 15 August. The rest is history. India and indeed the British colonies from Aden to Hong Kong had been held with the help of the Indian Army.

With India and the army gone, the sun set over the colonies and empire. The Army of World War II India inherited had the trained officers and men to shoulder the immediate security responsibilities and fill the vacuum after the departure of the British. Indian independence and the state would have been incomplete without the integration of the princely states. The same army was instrumental in assisting and ensuring the integration.

Forgotten with the Army is its contribution towards Indian Independence. But it is never too late. The American World War II Memorial opened on 29 April 2004 on the National Mall in Washington,DC. Perhaps the time has come for us to remember and commemorate.

3 thoughts on “Remembering the Forgotten Army of World War-II”