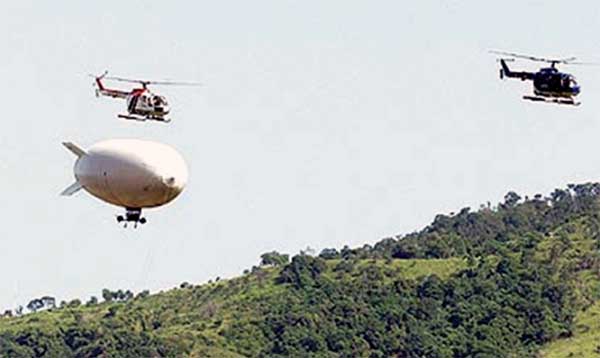 The application of aerostats for defensive area monitoring, or mobile airships for ISR patrol, can deliver mission effectiveness and cost containment while freeing IAF assets for other tasks…

The benefits of Lighter-Than-Air (LTA) platforms should be considered carefully and broadly as part of a holistic approach to strengthening the air defence environment in India, deploying force multipliers for the IAF and enhancing offshore patrol capabilities. Traditional piloted ISR aircraft such as Phalcon AWACS remain expensive to acquire, operate and maintain while slower or stationary, helium-filled airships and aerostats present manpower and cost efficient alternatives for rapidly delivering persistent elevated situational awareness supporting diverse missions.

“The application of aerostats for defensive area monitoring, or mobile airships for ISR patrol can deliver mission effectiveness and cost containment while freeing IAF assets for other tasks,” explains John Kiehle, Aeros’ Director of Communications adding, “Each LTA platform can provide enhanced capabilities and/or cost benefits to the IAF’s other regional operational commands (CAC, EAC, SAC, SWAC, WAC) as can Aeros’ ground-based solutions for elevated observation.”

Airships are typically piloted but have potential for future unmanned operations…

For a better understanding of capabilities enhancement for the IAF, now and in the near future, we will explore and illustrate the types of LTA assets and their expanding applications and benefits with the help of Aeros, a leading FAA-certified LTA manufacturer based in Los Angeles. Founded more than 25 years ago, the Aeroscraft Corporation (Aeros) has achieved multiple FAA airship type certificates and operates with an FAA Production Certificate while featuring a product line that includes advanced airships, tethered aerostats and the Aeroscraft cargo airship now in development.

There are three main categories of Lighter-Than-Air (LTA) assets, and each can further strengthen the air defense environment in different ways: unmanned and stationary Aerostats (tethered); mobile, piloted Airships (blimps), and new heavy-lift Cargo Airships that will enter service in the coming years (variable buoyancy vehicles).

•  Aerostats: Unmanned and tethered, aerostats are aerodynamic LTA platforms that provide cost-effective ISR support like a low-flying satellite system, but are much cheaper to launch and operate. Aerostats provide a constant ‘eye in the sky,’ providing persistent, wide-area coverage, particularly where topography or other factors limit land-based coverage. They can lend situational awareness to other air and ground support personnel, and are ideal when rapid deployment and persistent monitoring for days, weeks, months or years may be required. Large aerostats have fixed stations and can stay aloft for nearly a month between service maintenance, and often carry surveillance radar for long range detection and Precision Track and Illumination Radar (PTIR) to best focus on items of interest, as well as equipment for multi spectral HD imaging, and/or Communications and Signals Intelligence (COMINT & SIGINT) equipment. 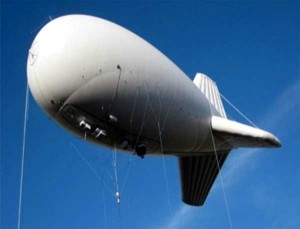 IDR readers are likely to be aware of India’s current use of large 71 meter aerostats (from Rafael/TCOM) now monitoring border areas, or may also be familiar with the Akashdeep aerostat system developed locally during the last few years by Aerial Delivery Research and Development Establishment (ADRDE) under the Defence Research and Development Organisation (DRDO). However, readers may not be aware that aerostats similarly aid persistent monitoring of America’s southern border and the area surrounding the US capital, supporting threat identification, immigration enforcement and national security because of their vigilance and cost-effectiveness.

For the military, this new generation of airships has the potential to revolutionise the future of intra-theatre airlift…

•  Cargo Airships: Modern cargo airships will support strengthening the air defense environment and force multiplication for the IAF in a markedly different way than traditional airships and tethered aerostats. An emerging LTA category being pioneered by Aeros to enhance military and commercial logistics, cargo airships are not currently in service, but should soon supporting logistics and humanitarian missions. Infrastructure independent cargo airships are likely to support commercial and economic development activities as well as military roles, helping support current air cargo growth in India; in 2013-2014, all operational airports in India handled two million Metric Tonnes (MT) of cargo (1.4 million MT international and 0.8 million MT domestic), registering a four per cent growth over the previous year. 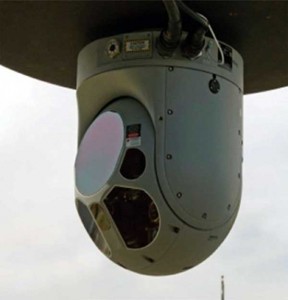 For the military, this new generation of airships has the potential to revolutionise the future of intra-theatre airlift, greatly increasing heavy cargo lift capability, reducing the logistics footprint in theatre, reducing dependence on airbases and ports, reducing the effectiveness of anti-access strategies employed by adversaries, and radically changing the hub and spoke logistics structure to one of point-to-point delivery. The cargo airship’s introduction to global logistics will reduce operational constraints on future heavy-lift, radically reduce energy use for aircraft operations on a tonne/mile basis, permit high-payload operations directly into austere locations with little infrastructure, surpass by several times the speed of fast sealift, and reduce the need for intermodal transport to move cargo from origin to point-of-need, with corresponding reduction in delivery time.

So exciting is their potential, that the US Congress recently created a new caucus to support the accelerated deployment of cargo airships. The bi-partisan caucus is Co-Chaired by Rep. Tom Rooney (R-FL) and Rep. Brad Sherman (D-CA), and has just started working to hasten the take-off of the cargo airship industry, an infrastructure independent mode of transportation, in support of military, economic, national security, diplomatic and environmental objectives. The chairmen explained their motivations for leading the caucus, stating:

Cargo airships are an exciting innovation because cargo airship utility has been historically hindered by external ballast exchange requirements, as well as lack of Vertical Take-off and Landing (VTOL) flight capability, slow speed, and non-rigid structural design that has limited payload capacity, aerodynamic loading (speed) and propulsion flexibility. Essentially you needed a large volume of lead or sand bags pre-deployed and loaded at destination before heavy cargo removal, to keep the helium-filled vehicle grounded. Aeros’ validated self-ballasting design for the 66-tonne and 250-tonne Aeroscraft address these limitations, while combining many of the flight attributes and benefits of fixed-wing, rotary and traditional LTA vehicles to move cargo directly or flexibly to new destinations independent from infrastructure.

The flight performance characteristics of airships and their flexible payload integration can cost-effectively service a variety of military and para-military missions strengthening the defence environment, both onshore and offshore, including: 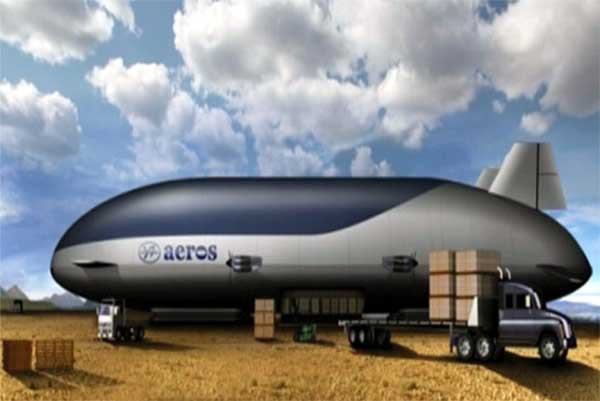 Mine Counter Measures (MCM): airships make a great complement to the current use of Unmanned Underwater Vehicles (UUVs) for the identification and neutralisation of naval mines (contact, magnetic, acoustic, pressure), replacing more expensive and vulnerable marine assets as the umbilical connected parent vehicle. Airships can provide longer time on station, and slow, low-level flight characteristics to enhance efficient observation around straits and outside harbors. 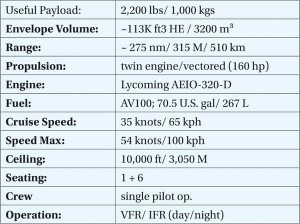 The aerostat system market will experience rapid demand growth during the next five years, growing from $3.93 billion in 2014 to $9.96 billion by 2020…

The benefits of Aeros’ mid-sized and tactical aerostats have delivered to over-border observation, defensive base protection and area observation outside the continental US have transitioned well to other security scenarios where they aid vigilant observation, identification, communication, documentation and interdiction. Aeros has an existing portfolio of solutions that range in size from 6M (tactical) to 39M in length (mid-sized), and also manufactures custom aerostats based on the specific mission requirements such as payload, altitude, wind speed and operating temperatures. Aeros’ production models range in payload accommodation from 9 to 300 kg, and the entire portfolio provides easy field operation and low manpower/maintenance requirements.

Aeros’ 39-metre length multi-payload aerostat has been designed to provide the full ISR capabilities associated with larger systems, but with the flexibility and reduced logistical footprint of smaller tactical aerostats.

The multi-payload aerostat can accommodate 300-kg payloads at operational altitude of 1,500 M above ground station, with mission duration of 21 days between servicing. The Re-locatable Integrated Mooring System (RIMS) permits full system transport and rapid redeployment, while the integrated remote winch system empowers easy launch and recovery for the operator.

Aeros’ 3200 is an example of a mid-sized aerostat system, similar to but longer than the Akashdeep aerostat system, which may be more familiar to IDR readers (developed by ADRDE for the DRDO of India). India’s domestic aerostat development continues amid increasing mission demand.

The ADRDE is now working on a more advanced version (Nakshatra) with increased payload and longer endurance, expected to enter service next year. Other IDR readers may also be familiar with the large LTA asset, which is also technically an aerostat, used in the opening ceremony of the 2010 Commonwealth Games held in Delhi.

Recent market research suggests that the aerostat system market will experience rapid demand growth during the next five years, growing from $3.93 billion in 2014 to $9.96 billion by 2020, and this growth is being driven by all aerostat size categories, particularly tactical, as well as integration of payloads that support non-traditional missions (from precision agriculture to wildlife monitoring).

Tactical aerostats are smaller systems that can support ISR and communications for local areas, military installations or individual field-based soldiers. They can serve as a soldier-centric tactical ISR platform, or an advanced portable and quick assembly surveillance system.

Tactical aerostats have more limited payload capabilities due to lower HE volumes. However, advances in lighter payloads developed for drone integration now empower midsize and tactical aerostats with greater capability and cost effectiveness. Aeros has two tactical aerostat production models that can help illustrate the sub-category: 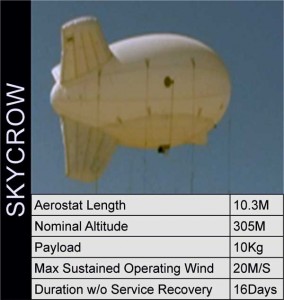 The system integrates payloads for high-resolution electro optics or thermal imaging, communications relays, or other payloads up to 20 lbs. 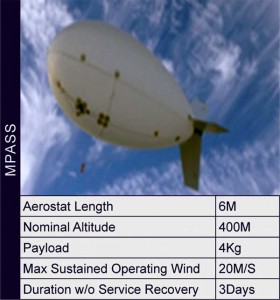 Aeros’ Man Portable Aerial Surveillance System (MPASS) has been designed for set-up and deployment by a single operator with minimal training requirements.

The system can carry lightweight cameras and payloads to 300M. When vehicle mounted, MPASS can operate whether the vehicle is moving or stationary.

The system remains stable in winds up to 35 knots, and can transfer video data to virtually any video input device. MPASS uses a HD color camera with 5-FOV matched optics, equipped with Automatic Video Tracker to monitor the field of view, and can integrate a 100mW laser pointer Eye Safe Laser Range Finder (ESLRF) for marking targets.

Force Multipliers for the IAF

The performance characteristics of traditional airships and aerostats can also serve as significant force multipliers for the IAF, beyond strengthening the air defence environment, reducing operational costs to free budgets for other commands or capability acquisition. Airships and aerostats generally have reduced acquisition, operational and sustaining (maintenance) costs over comparable ISR aircraft. Their speed, operational altitude, range and low and slow capability are simply better suited to certain missions than fixed-wing or rotary aircraft. Beyond long endurance, they provide operational cost effectiveness with both man hour and fuel advantages, have payload volume and flexibility advantages (for radar, cameras, antennae and acoustic detection), and can accommodate relief pilots, and permit onboard data analysis or remote monitoring.

Fixed wing commercial aircraft with comparable useful payloads used for ISR such as the King Air 250/350i (Beechcraft) and rotary aircraft such as the Dhruv or Sikorsky helicopters, require two pilots, while Aeros’ airships can be flown by a single pilot. Sustaining costs are also significantly divergent. The ‘Sky Dragon’ airship from Aeros has a maintenance and spare part contigency of $64 per flight hour, wheras average airframe and engine maintence costs for a helicopter can be twenty times more per flight hour (Si-92 ‘Seahawk’ ~$1,819 per/hr).

John Kiehle, Director of Communications at Aeros, a leading US - based manufacturer of airships, aerostats and elevated platforms for situational awareness.