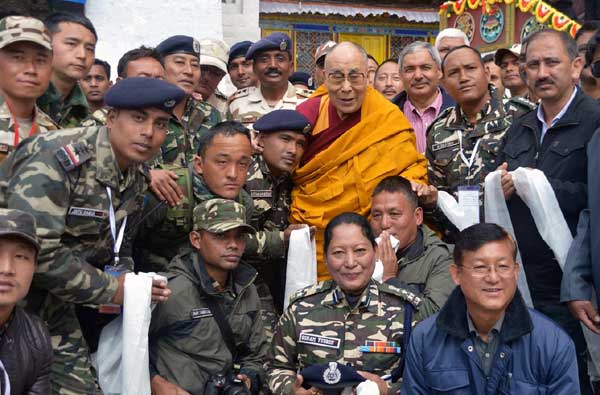 There has been a substantial amount of heat and dust raised over the intemperate actions of the Chinese in the South China Sea and President Trump’s aggressive posturing prior to President Xi Jinping visit to America including the threat of unilateral action against North Korea.

There is an apparent confluence of interests discernable in the Indo-US relationship as India finds itself increasingly restricted to its own neighbourhood by the stranglehold that China has been able to fashion.

Despite this, one thing is fairly obvious that there is little likelihood of any military confrontation in the region involving either the United States or China. Posturing is all that the United States can afford to indulge in and the reasons for that are obvious. For one, whether the Pentagon admits it or not, the US Military is war- weary having been continuously engaged in conflict for over a decade and a half, in the Middle East, North Africa and Afghanistan with little to show for its efforts and every likelihood of being unable to fully disengage because of the continuing instability in those regions.

Added to this is the aggressive intent shown by Russia to change the existing status quo in the geo-political scheme of things, both in Europe and the Middle East, which is keeping the Western Powers on tenterhooks and looks to be heading towards Cold War 2.0. Finally, as important a factor, if not more so, is the necessity for America and China to work in closely in tandem given the manner in which their economies are so tightly entwined.

A Brexit like situation is the last thing either of these nations need at this stage just as they have started to tentatively recover following the economic downturn of the very recent past.

It stands to reason then that the United States, while conceding space to China in Asia, will attempt to protect its core interests and contain China in the region through proxies, mainly with the assistance of its Allies there, among which India is emerging as an extremely important one.

The Sino-Indian relationship is marred to a large extent by China’s inability to accept the rise of another power in Asia.

There is an apparent confluence of interests discernable in the Indo-US relationship as India finds itself increasingly restricted to its own neighbourhood by the stranglehold that China has been able to fashion. Examples of this are its unequivocal opposition to India’s membership in the Nuclear Suppliers Group and the assistance it is providing Pakistan in enhancing its military capabilities, including the very real possibility of leasing it a nuclear powered submarine in the not too distant future. Its commitment to the China-Pakistan Economic Corridor (CPEC) that passes through parts of “Pakistan Occupied Kashmir” that India claims as its own integral territory and the development of a strategic naval facility at Gwadar where it will station 3000 Marines also cannot but add to Indian insecurities.

In addition, even within the Indian Ocean Region, which India considers its backyard, it finds itself hemmed in by the “string of pearls” and the Maritime Silk Road policies that China is so aggressively and adeptly pursuing in an attempt to woo Myanmar, Bangladesh, Srilanka and the Maldives by providing them vast amounts of economic aid.

The Sino-Indian relationship is marred to a large extent by China’s inability to accept the rise of another power in Asia. From Confucian times they have always believed that no legitimate international order can rest on the formal co-equality of sovereigns and therefore refuse to accept any other nation as an equal and will do all in their power, preferably without having to resort to violent conflict, to become the dominant power in that region. While they may be ambitious enough to want to pull down the United States from its position of the sole super power, they are hard headed enough to realize that is beyond their capability for the next few decades. However, they are unwilling to countenance the rise of any other power in Asia.

There is also a competitive facet to this relationship as both countries compete to corner natural resources and markets in their attempts to pull their vast populations out of poverty and join the developed world.

It is China’s inherent fear of losing control over Tibet. Their occupation of Tibet is questionable given the levels of protests by the ethnic Tibetans in the region over the years, even to this day.

Finally, the relationship has been greatly aggravated by the on- going border dispute that has remained unresolved ever since the occupation of Tibet by the People’s Republic of China in 1949-50. It resulted in the border war of 1962 that India lost, consequences of which continue to haunt the Indian psyche and the security establishment even to this day.

However, despite lack of any apparent progress in talks that have lasted over three decades, regular cross-border intrusions and even the odd confrontation, the border continues to remain relatively quiet and peaceful. This is a far cry from the situation that India faces along its disputed boundary with Pakistan in Kashmir, where cross-border artillery duels, terrorist infiltrations into Jammu and Kashmir from Pakistan and attacks on Border Posts are a routine feature.

While all these factors are a cause for worry, they can be mitigated or resolved if suitable impetus and focus is given to the subject by the political leadership on either side. The real flashpoint that may lead to another conflict and is the probable reason for Chinese antipathy towards India, however, is an issue that continues to be shrouded in the background. It is its inherent fear of losing control over Tibet. Their occupation of Tibet is questionable given the levels of protests by the ethnic Tibetans in the region over the years, even to this day.

The civil disturbances of 2008, which required the induction of two divisions to pacify the restive population of just Lhasa and its environs, are still quite fresh in the minds of the Chinese leadership. That they have been unable to pacify Tibet despite more than 75 years of punitive action against them, involving torture and murder of protestors as well as an ongoing attempt to transform the demography of the region by pushing in millions of Han settlers.

The governing elite is firmly of the opinion that Tibetan opposition to Chinese occupation has been sustained through the overwhelming influence that His Holiness, The Dalai Lama, continues to wield despite living in exile in India for nearly six decades. This they believe would not have been possible without complicity on the part of the Indian Government.

Recently, in an unprecedented move, Mr. Dai Bingguo, a former Deputy Foreign Minister of the People’s Republic of China and State Councilor, who had represented China in 15 rounds of talks with India on the border question till his retirement in 2013, has suggested a methodology to resolve the border issue. In an interview to a Chinese magazine he has suggested that if India ceded the Tawang region in Arunachal Pradesh, China would reciprocate by giving up its claim over Aksai Chin to solve the border dispute between both countries. For such a statement to be made by an experienced diplomat and politician of his stature, without official patronage is improbable and unlikely and thus needs to be given serious consideration, especially given its timing.