Palestinian Islamic Jihad turned out to be a Dark Horse 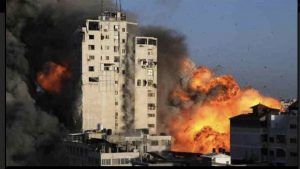 Fresh round of escalation between Israel and armed groups from Gaza has just completed. In this round, thousands of rockets are being fired towards Israeli cities and Israel Defence Forces (IDF) responded with overwhelming airstrikes. The biggest group and de-facto ruler of Gaza, Hamas got much of the attention in this flare-up. But it was a relatively much smaller Palestinian Islamic Jihad (PIJ) turns out to be the dark horse in this conflict. Despite losing top operatives and military infrastructure PIJ kept firing large barrages of rockets until the ceasefire came into effect. Also, PIJ rocket fire was very heavy and was comparable to Hamas in terms of both volume and range. This illustrates that PIJ has stepped out of the shadow of the big brother Hamas. Founded in the early 1980’s Palestinian Islamic Jihad (PIJ) is one of the most important yet least understood Palestinian armed faction, both in terms of its history and ideology. Designated as a terrorist outfit by the US and the EU both. It has grown to become the second-largest armed movement in the Gaza Strip and the third largest within the Palestinian Territories. The group has a reputation of being small and highly secretive, which makes it less prone to infiltration by Israeli intelligence services.

Hamas bears responsibility for running the day-to-day affairs of Gaza the coastal enclave often in news because of its Humanitarian hardships. Islamic Jihad has no such limitations and has emerged as the more militant faction, occasionally even undermining Hamas authority. The Islamic Jihad doesn’t bother with all those issues of social work, welfare, clinics, and food. They only care about Jihad and are of opinion that everything else will be dealt with afterwards. Because of this increasing number of Palestinians see PIJ as less willing to compromise than Hamas. PIJ is the smaller of the two main Palestinian militant groups in the Gaza Strip and is vastly outnumbered by the ruling Hamas. But it enjoys direct Iranian backing, both financially and militarily, and has become the driving force in rocket fire and confrontations with Israel. Many times it has picked up a fight with Israel on its own without taking any other resistance group in confidence. PIJ in recent time has tried to outflank Hamas by presenting itself as a more radical opponent of Israel. It’s the increased support of Iran for PIJ which is making them more flamboyant as it’s a known fact that Tehran’s favourite child in Gaza is Islamic Jihad.

While Hamas falls further down into the hole of governance, responsibility, and negotiations. PIJ will not only have a justification for existence alongside Hamas but will also prosper. According to Israeli media reports although Hamas is believed to have far more long-range rockets than PIJ. The Islamic Jihad is estimated to have as many as 8,000 short-range rockets, meaning it has more firepower to bring to bear than even Hamas against the nearby Gaza corridor. Also, most of the group’s weapons are locally produced now in Gaza. In recent years it has developed an arsenal equal to that of Hamas, with some longer-range rockets even capable of striking the Tel Aviv metropolitan area in central Israel. The group tried to overwhelm the Israeli state of the art missile defence system i.e. Iron Dome by the mere volume of the projectiles fired simultaneously. Many of the rockets are so cheap and easy to manufacture, in some cases requiring little more than metal casing and an explosive. That the group have been able to accumulate them in significant numbers. Even if Israel is able to effectively stops all the outside supplies coming into Gaza. PIJ because of its homegrown capabilities can sustain rocket fire in large volumes towards Israel for weeks if not for months. Islamic Jihad has moved into entirely indigenous production, often manufacturing both the weapon and the explosives out of raw materials available in the Gaza strip.

Shortly after Hamas seized control of the Gaza Strip in July 2007 the al-Qassam Brigades military wing of Hamas launched an extensive military operation to disarm the other organizations operating there. Only two groups were entitled to extensive “relief” from this campaign the Popular Resistance Committees and Islamic Jihad. Hamas leadership must be regretting this generous favour it did to PIJ. Because in return PIJ has most of the times has undertaken stand contrary to Hamas position. PIJ firmly believes that it has nothing to lose and everything to gain by escalating tensions with Israel as it will be seen as leading resistance against the Zionist state. While Hamas rightly believes at least for now that things need to be calm down with Israel. So, that Gazans can have some breathing space. But Hamas soon has to make tough choices otherwise it will be ousted from driving seat in Gaza. Hence Hamas has to take effective measures to prevent Islamic Jihad’s independent and sole benefiting activities. Because when Gaza will bleed from the Israeli onslaught then common people will be held Hamas responsible only as they are the administrators of the strip.

“A History of Palestinian Islamic Jihad Faith, Awareness, and Revolution in the Middle East” Authored by Erik Skare published by Cambridge University Press