Pakistan sponsored terror: India must prepare for a long haul 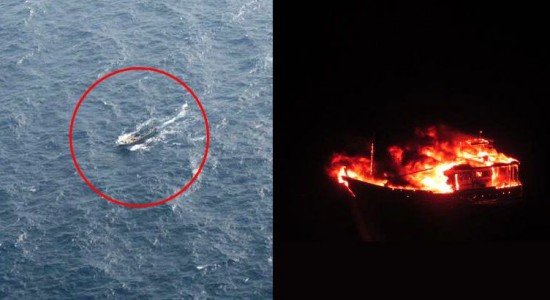 An All Party Conference (APC) has recently been held at Islamabad, Pakistan, to formulate a National Action Plan (NAP) against terrorism. PM Nawaz Sharif has hailed this as historic solidarity among the political parties to challenge a national security threat.

This indicates the high level of indoctrination, training and briefing that they had received before embarking on their mission; they were, without doubt, a fidayeen (suicide) squad.

Even as the meeting was going on, terror mongers in Pakistan were busy initiating a maritime terror plot against India. A fishing boat laden with explosives left from Keti Bunder near Karachi in Pakistan for the Porbander coast. Alert Indian security carried out a well coordinated operation in which a number of agencies were involved. The boat was ultimately cornered within Indian waters. Before the Indian authorities could seize the boat and conduct an investigation the occupants blew up themselves and the boat.

It is obvious that the occupants of the boat had been told to evade arrest even at the cost of self destruction. This indicates the high level of indoctrination, training and briefing that they had received before embarking on their mission; they were, without doubt, a fidayeen (suicide) squad.

In this instance, as in earlier cases, Pakistan has chosen the path of denial. Pakistani officials requesting anonymity insinuated that India could have blown off one of the Pakistani boats in her custody to “create” an incident. No official statement, however, has been issued. One is reminded of a similar denial in the aftermath of the Kargil War and the 26/11 terror attack at Mumbai when Pakistan was not ready to acknowledge the dead bodies of its citizens. Such treatment for those called upon to lay down their life for the cause of the Nation is dishonourable to say the least.

While the maritime terror plot was progressing the land segment of the grand terror plan targeting India was also quite active. Pakistan Rangers heated up the International border in Jammu by opening fire on the eve of the New Year. The massive retaliation from the Indian side led them to raise a white flag but not before an Indian soldier of the BSF and some others in Pakistan lost their lives. In this case, Pakistan was quick to lodge an official protest termed as a “breach of trust.” There has been no respite in firing in the Samba and Kathua sector of the Jammu region ever since. There have been more casualties and civilians have, once again, been forced to vacate their houses in the face of a belligerent onslaught.

India has no option but to face up to Pakistan sponsored terror in the most effective and professional manner possible.

Pakistan needs to understand that following a dual policy of this nature would be counter-productive to the serious need to get a hold on the spiraling violence being caused by religious radicalisation of the country. If the problem is not removed from the very root it will bounce back with renewed force. As things stand today, an understanding of this nature seems to be quite far removed from the Pakistani leadership.

Regrettably, US policy in Pakistan knowingly or unknowingly is also aligned to this thought process. A recently approved US defence authorisation bill has provided $ I Billion worth of aid to Pakistan. The aid is contingent to a precondition of Pakistan working towards disruption of the Haqqani Network, al-Queda and TTP. There is no mention of groups like the Lashkar-e-Taiba (LeT), the Jaish-e-Mohammad (JeM) etc that are directed towards India.

In case the political leadership of Pakistan is unable to get a hold on things it can be reasonably presumed that actual authority lies in the hands of the radicals – a mix of the Pakistan army and the Jihadi elements. A circumstance of this nature would offer negligible scope for a dialogue with the country.  India, therefore,  has no option but to face up to Pakistan sponsored terror in the most effective and professional manner possible.

Security challenges emanating from across the border have to be dealt with firmly so that a strong message is sent out to Pakistan as well as the international community.

The manner in which the maritime attempt has been foiled with credible intelligence inputs and multi-agency coordination is a reason for cheer. It proves that the security set up in the country has evolved significantly since 26/11. There is, however, more required to be achieved before it can be said that the country is reasonably ready to face the terror threat emanating from the neighbourhood. Even if the security set-up attains optimum levels of efficiency there would be a need for constant vigil and improvement because security can never be fool proof especially against an enemy as vicious and diabolic and the Pakistan.

Jammu and Kashmir requires special attention since it is in the forefront for terror assaults emanating from Pakistan. The situation is likely to escalate with the swearing-in of the next government.  The heating up of the border is an attempt to scuttle a PDP-BJP alliance.

India needs to work out its options in consideration of the consistent inability of Pakistan to stand up to its promise to stop the export of terror. Under the circumstances, any precipitate action to change the security paradigm in Jammu and Kashmir would have serious consequences. Security and politics have to be viewed separately to ensure that evil designs from across the border are thwarted.

India has achieved much in its fight against foreign sponsored terror, a lot remains to be done. Above all, India has to prepare for a long haul in this fight against terror. Security challenges emanating from across the border have to be dealt with firmly so that a strong message is sent out to Pakistan as well as the international community.

One thought on “Pakistan sponsored terror: India must prepare for a long haul”