Pakistan Army - The Enemy Within 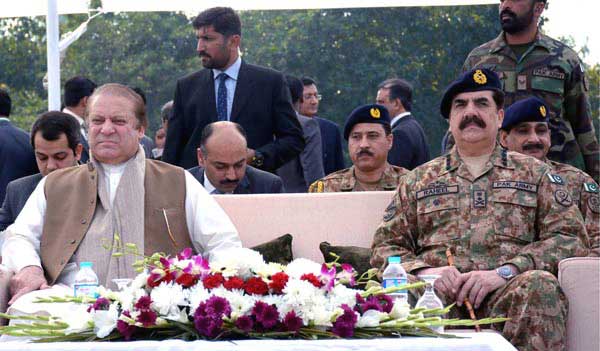 Every country has an army but Pakistan army has a country! The Pakistan army is an un-elected institution in itself which over the years have deliberately crafted, created and sustained an India-centric security narrative through two of its nefarious wing of ISPR and ISI.

Through direct and indirect means, the army intervenes forcefully in the national narrative and promotes itself as the defender of the country’s ideology. That ideology, of course, is of its own making.

One of the dirty departments of Pakistan military is ISPR (Inter-Services Public Relations). ISPR is headed for the first time by a three star General, since its inception. This was formed in 1949 to broadcast and coordinate military news and information to the country’s civilian media and the civic society and also to act as an interface between the armed forces, the media and the public.

It has played the dual role of projecting India as its existential threat and on the other hand gathered national support for the armed forces at the public level. For achieving its aim, ISPR often resorts to any means including murder, bribery or intimidation of the electronic or print media. Assassination attempt of prominent Pakistani TV figure Hamid Mir in 2014 was allegedly being planned by ISPR and executed by ISI.

ISPR actively engages with prominent media figures and present them with selected information that supports the army’s perspective. The co-option is done both nationally and internationally. Through direct and indirect means, the army intervenes forcefully in the national narrative and promotes itself as the defender of the country’s ideology. That ideology, of course, is of its own making.

Pak Military through its machinery has created such an impression within Pakistan that a large majority of populace nurture extreme hatred towards India and constantly lives with the fear of India’s aggression or what you call as repeat of 1971 war. This kind of jingoism has facilitated the military to claim and perpetuate its formal role in strategic policymaking.

Since its birth, Pakistan’s civilian and military leaders have quarreled over many issues, Kashmir being prominent amongst them.

Kashmir is an issue which has been created and nurtured by the Pakistani leaders and military over the years since independence. In fact Kashmir is as much if not more, a dispute between Pakistan’s civil-military leadership as it is between India and Pakistan.

Kashmir pits Pakistan’s civil and military leaderships against each other. Civil leadership have been willing to settle the issue politically but it is the powerful military which harps on resolving it by supporting and abetting terrorism as they are well aware of their limited capability and unique distinctive past of losing all wars against India.

The 1947-48 war over Kashmir that briefly followed Pakistan’s independence not only set the neighbours on a perennial collision course; it also revealed for the first time a deep-rooted schism in Pakistan’s civil and military leadership, with the former more prone to political settlement than the latter.

The fact of the matter is that the civilian government has never controlled Kashmir policy, nor is able to convince its military leadership to renounce jihad as a tool of statecraft.

As Aqil Shah notes in The Army and Democracy: Military Politics in Pakistan, the willingness of civilian leaders to accept a ceasefire in the 1947-48 war was one of the major factors that angered the military leadership and paved the way for the first military coup—a precursor to all coups, soft and hard, in Pakistan.

Kashmir has seldom figured in the priority list of Pakistan’s civil government of Bhutto, Zardari or Nawaz. All their political leaders including generals like Pervez Musharraf who made the move to politics have tried to find a political and negotiated solution rather than a military solution to the dispute. According to some reports, General Musharraf had agreed to give up claims on Jammu and Kashmir and the plebiscite option under the United Nations on certain conditions.

The fact of the matter is that the civilian government has never controlled Kashmir policy, nor is able to convince its military leadership to renounce jihad as a tool of statecraft. The recent article in Pakistan English daily Dawn on the civil military standoff by Cyril Almeida is a testimony to this.

The report which created an uproar within Pakistan, talks of PM Nawaz Sharif in joint meeting of civil and military accepting the fact of using terror as an instrument of state policy and clarifying that it was the decision taken jointly by civilian and military leadership in late seventies and were the collective responsibility of the state but things had changed over the years and now the democratic government was not on the same page with military establishment on this particular issue.

The probability of Army takeover after the India’s surgical strike cannot be ruled out keeping the previous records in mind.

There is a behavioral pattern which the expert can decipher of the Pakistan Army in general and their Kashmir’s policy in particular:-

The Pakistan Army, though have generally supported the Kashmir policy but their demand became more pronounced after their defeat in 1971 war in which the country was divided into two. The stance of the Pak army changed drastically, after being badly humiliated and the myths broken of the domestic audience.

Every time the Pakistan military is humiliated by Indian army, there has been a backlash by military, resulting in civil democratic government being overthrown, be it the humiliating defeat in Bangladesh war or the Kargil conflict in 1999, its military took over the reins of country just to safeguard their own personal image and further the interest of handful of the army top brass who literally have been fleecing and exploiting the country on the name of national security. The probability of Army takeover after the India’s surgical strike cannot be ruled out keeping the previous records in mind.

Pakistan’s powerful military elite needs to bury the deep rooted hatred of the past defeats and begin to understand the complexity of relations between Islamabad and Delhi.

PM Nawaz Sharif must be having sleepless nights as he is the one who has been overthrown twice in the past by his own chosen generals. Not to forget that Sharif has the unique distinction of handpicking five out of six last army chiefs barring Parvez Ashfaq Kayani and if he survives for next two months, he would have the honour of selecting the next one also due in November.

It is not that the efforts have not been made to normailse the relations and bring peace between two estranged brothers. There have been numerous attempts to improve the relationship—notably, the Shimla summit, the Agra summit, the Lahore summit or the PM Modi’s  outreach to Pakistan twice, first by inviting PM Nawaz Sharif to attend his swearing in ceremony and next by paying surprise visit to Pak to wish PM Sharif on his birthday, but all such initiatives and attempts were reciprocated by heinous terrorist attack on Indian soil with the prime motive of derailing the peace talks, Vajpayee’s Bus journey to Lahore followed by Kargil or PM Modi’s surprise stopover in Lahore followed by Pathankot terror attack are few examples of it. There is enough evidence to believe that all such attempts to thwart peace have been planned and perpetrated by the Pakistan Army.

Pakistan’s powerful military elite needs to bury the deep rooted hatred of the past defeats and begin to understand the complexity of relations between Islamabad and Delhi. Hopefully General Raheel Sharif and his successor would have the pragmatism not to fool their own nationals on the name of Kashmir and so called existential threat from India.

2 thoughts on “Pakistan Army – The Enemy Within”