Other countries pay real price for US' mistakes 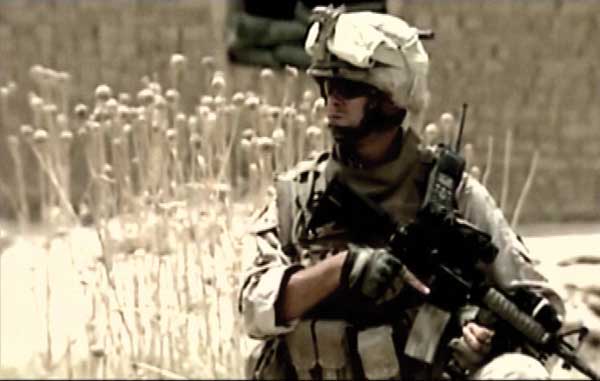 An American Soldier in Afghanistan

Recently The New York Times announced with breathless urgency that China was ramping up its military spending to $148 billion, up from $139.2 billion last year, adding that China already spent more than any country in the world, except the United States. The first impression was that American and Chinese military expenses were almost equal although the declared Pentagon budget last year was $575 billion. What the report does not say is that the US expenditure is higher than the next 13 countries, including Russia, India and China.

…the US has spent about $3.5 trillion or $7 million for every dollar spent by the terrorists. And yet from Libya to Pakistan, the world is in turmoil.

American researchers Chris Hellman and Mattea Kramer had calculated that cuts notwithstanding, the total national security budget for 2013 was nearly a trillion dollars. They had included various expenses like war funding, additional war funding for Iraq and Afghanistan, on nuclear weapons and programmes, homeland security, pensions and retirement benefits and so on, which are not reflected in the declared Pentagon budget. In comparison, our defence budget is about a third of the Chinese budget and the gap will continue to grow over time. We are not in the big league.

Very often people wonder how the Americans have been able to keep terrorism under control and we have not. Apart from the major difference that we have a neighbour which actively sponsors terrorism in India and at other times just nurses them as reservists for future use, the US has invested massive amounts in trained manpower and its global redeployment, intelligence and surveillance, weaponry and equipment to meet new threats. There is a huge cost that the State incurs and a price the people pay by surrendering some freedoms for greater security. Once again we are not in the same league.

The Indian armed forces have their commands dividing their jurisdiction within the country into various sections. The US has carved the globe like a watermelon into six slices. Each slice is a combined military command of which the PACOM is for China, Japan up to India and the CENTCOM is for all the oil-rich nations of West Asia, Israel, Central Asia and North Africa and includes Afghanistan and Pakistan. In addition, the STRATCOM includes the US Space Command and, as the name implies, the CYBERCOM. The US has 700 bases of various kinds all over the world, according to some reliable US analysts. The country’s weapon manufacturers controlled 78% of the global arms market a few years ago. And the world is still unsafe.

The US has 700 bases of various kinds all over the world, according to some reliable US analysts.

More has been done to secure the US as a fortress. Ever since September 11, 2001 Americans reassessed the new threat and the US Special Operations Command (SOCOM), with a global reach and footprint, has been added. Special Operations Force (SOF) units comprising variously the Green Berets, Rangers, Navy SEALs and Delta Force are present in about 100 countries since 2012 and 2013. With the force strength expected to reach 72,000 this year, of which about half of them would be combatants, the goal is to become a global SOF of ‘like minded interagency allies and partners’ if SOCOM chief Admiral William McRaven has his way. The aim is to build a network of alliances at home and abroad so that the SOCOM forces are at the centre of every conceivable global hotspot and power centre. As with the military commands there are now subsidiary SOCOM commands globally. There have been joint exercises with similar forces of other countries in Asia and in Africa.

To be able to react in time with force and authority or pre-empts enemy action, any power, especially a superpower, needs all-encompassing intelligence collection and interpretation capability. Today, the US intelligence apparatus, with a budget of $80 billion and spread over 16 agencies, is the biggest in the world. The US has outsourced much of its technical intelligence collection where private corporations were made partners and there is today a huge military-industry-intelligence complex that tries to keep the country safe. The National Security Agency (NSA) can sweep 5 billion records every day on the whereabouts of cell-phones all over the world — much like in an Orwellian world where everything said or written by anyone anywhere can be monitored. The NSA collects about 6.5 terabytes of information in one minute. In comparison, the US Library of Congress collects 5 terabytes of records in a month. Similarly, private military contractors now provide mercenary troops for tactical operations, training, logistics and expert advice in the privatisation of warfare.

The cost incurred in the war on terror has been huge. The al Qaeda was estimated to have spent half a million dollars on planning and attacking the World Trade Center and Pentagon. In response, the US has spent about $3.5 trillion or $7 million for every dollar spent by the terrorists. And yet from Libya to Pakistan, the world is in turmoil.

China may become the largest economy by the end of this decade, but the US will still be the strongest global power, despite the limitations of unilateral power.

More than a decade after the war on terror began and with hundreds of thousands killed the US seems willing to do a deal with the extremists it avowed to annihilate. What went wrong? Maybe the US simply fought the wrong war (an unnecessary and futile war against imaginary enemies in Iraq whereas the enemy was in Pakistan), at the wrong place (in Afghanistan whereas the support bases were in Pakistan) and wrong allies (Pakistan played a duplicitous game throughout, which would have been evident when the first al Qaeda terrorists, Abu Zubeidah and Khalid Mohammed Sheikh, were arrested in Faisalabad and Rawalpindi). It is said of the US that it comes to the right course of action after making all the mistakes. Unfortunately, it is others who end up paying the real price. And that includes Pakistan too. Ukraine looks to be the next candidate.

China may become the largest economy by the end of this decade, but the US will still be the strongest global power, despite the limitations of unilateral power. We are now living in a world where no single power can unilaterally pursue its global agenda. Anxious to retain its prime slot, the US has relied heavily on the corporate sector for its security. That is where the funds and innovation are. The scheme of things is that the corporate sector relies on production and consumption for sustainable profits. We all know what that means when it comes to war material.

One thought on “Other countries pay real price for US’ mistakes”