Nathu La to Kailash: Trip down the memory lane

Once upon a time, not far from Nathu-la, the pass situated at 4,310 metres above sea level between Sikkim and Tibet, India had a stunning Trade Agency in Yatung in Tibet. This came back to mind when I saw some photos of the launch of the second pilgrims’ route to Mount Kailash.

When Chinese President Xi Jinping visited India in September 2014, he agreed to open this ‘easier’ route. The present route, via Lipulekh Pass in Pithoragarh’s district of Uttarakhand (and Purang in Tibet), is dangerous and often badly damaged by landslides.

Prime Minister Modi was keen to have an alternate route; Xi Jinping offered the Sikkim one, though it is a much longer route compared to Shipki-la in Himachal or Demchok in Ladakh, which had been requested by India.

Anyhow, the deal was signed and the details worked out when PM Modi went to China in May.

As the first pilgrims crossed over to Tibet earlier this week, PTI reported: “The pilgrims belonging to different age-groups and hailing from various parts of India made their way to the Nathu-la pass, acclimatizing themselves for the high-altitude journey to Kailash which stands at an altitude of about 6,500 metres in Tibet.”

The first batch of 250 people has been allowed to take part in the yatra, via the new route. The pilgrims, many middle-aged or retired citizens all were delighted; they had been looking for such an opportunity for years.

The Chinese Ambassador to India Le Yucheng was present for the occasion. With the Councillor in the Indian Embassy in Beijing, Shrila Dutta Kumar and some Chinese officials from Tibet, he welcomed the pilgrims.

Le Yucheng said: “Instead of travelling through rough terrain facing high risks, you can reach the sacred place in bus while enjoying the heavenly beauty along the way. I am sure the Indian friends can feel the warm hospitality and profound friendship of Chinese people,” adding that the Indian pilgrims will not only gain spiritual strength but also develop better understanding of China. One could of course ask: and what about Tibet, Mr. Le?

Soon after they crossed the pass, the yatris descended in the luxuriant Chumbi valley; for centuries, countless Tibetan traders, lamas, pilgrims and officials used this route on their way to the hot plains of India. The first large town crossed by the yatris was Yatung.

The Chinese vehicles must have sped up, to not bring old memories back; less than 60 years ago, most of the shops in Yatung were run by Indian traders. In 1958, Jawaharlal Nehru visited the place on his way to Bhutan.

The Prime Minister had left a vivid description of the place: “Yatung was a small spread out town. The main market road was full of Indian shops. There were, I believe, over ninety such shops, many of them having started business in the course of the last three years, when this trade was highly profitable. Conditions were more difficult now and so a number of these Indian shops were closing up. …Our own Trade Agent’s house had its own little hospital and buildings for the staff.” Nehru then mentions “the harsh climate and the high altitude; the lack of social life or amenities and a sense of seclusion from the outside world: “Only physically tough people could stand these conditions for long.” He even suggested that Mr. Bachchan (Big B’s father) should select some Hindi books for the diplomats posted there.

Today, I am wondering how many of the yatris knew about Yatung, one of the most flourishing Indian Trade Agencies in Tibet? Probably none! It is a tragedy in itself. India had a beautiful Agency building where the then Prime Minister spent 2 nights in 1958. What has happened to the building? 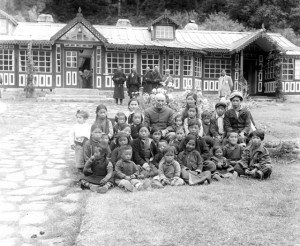 Photo Studio/October, 1958/FM, A22a(i)/A57f Photo shows the Prime Minister, Shri Jawaharlal Nehru seen with a group of school children at Yatung, which he visited on September 29, 1958.

For the past 2 years, I have asked several persons familiar with Sikkim, if the Agency still proudly stands on the hill above the main bazaar (now Yatung town)? Nobody knows.

Apparently, the building belonging to the Government of India has been destroyed by China. When? Nobody is able to tell me.

In the 1960s already, the Chinese were keen to erase the trace of the Indian presence in the Chumbi Valley and Yatung.

On October 31, 1962, the Ministry of External Affairs sent a memorandum to the Embassy of China in Delhi, it states: “The building of the Indian Trade Agency at Yatung has been the property of the Government of India for several decades. When the Trade Agency was withdrawn in 1962, the Chinese Embassy had been clearly informed of the Government of India’s intention to retain their property and buildings at Yatung under the charge of the Indian Consul General at Lhasa.”

New Delhi intended to use the heritage building as a resting place for Indian officials proceeding to Lhasa or returning to India: “The Indian Government’s request is fully in keeping with international custom and practice,” said the memorandum.

In June 1962, the Chinese Government had agreed that the buildings could remain under the charge of the Indian mission in Lhasa and be used as a rest house.

A few months later, when Chinese miscreants destroyed some parts of the heritage building, the Chinese put the blame on Arvind Deo, the Indian Consul General in Lhasa, who had passed through Yatung on his way to India.

On December 29, Beijing informed the Indian Embassy in China: “According to reports from China’s Tibet local authorities, when the former Indian Consul-General in Lhasa AR Deo and his staff withdrew from Lhasa and were passing through Yatung, they seriously damaged property within the premises of the former Indian Trade Agency in Yatung in the afternoon of December 15, 1962. …they demolished several motor-cars, broke up a diesel generator, cut open several dozen barrels of gasoline, diesel oil and machine grease with hatchets, broke down doors and windows, etc.”

One can hardly see the mild diplomat ‘smashing’ a building belonging to his own government.

South Block immediately denied any wrong doing from its personnel, and stated the facts: ‘miscreants’ paid by China attacked the beautiful building: “Even in July 1962, it had come to the notice of the former Indian Consul General at Lhasa that the former Trade Agency buildings at Yatung had been forced open, glass panes on the doors and windows broken and all the valuable properties removed.”

This was several months before the Sino-Indian War. 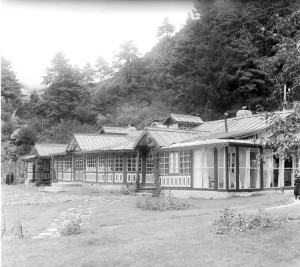 The attack against the Agency was also reported by the Indian Consul General in Lhasa to the Chinese ‘local’ authorities in Tibet, particularly an officer called Hang, the Vice-Director of the Foreign Bureau. Hang told the Arvind Deo that the local authorities in Yatung were neither responsible for the safety of the Indian properties in Yatung nor were they interested in what happened.

On March 11, 1963, the Ministry of Foreign Affairs in Beijing sent another memorandum to the Indian Embassy again accused the Indian diplomats: “On December 15, when they stopped at Yatung on their way back to India, the Indian officials …destroyed with axes, steels rods and other things the auto-vehicles, electric-generators and scores of drums of gasoline and diesel oil kept in the courtyard of the then Indian Trade Agency, glass panes of the doors and windows…”

The Indian ministry immediately denounced the Chinese Government for the slanderous attack on the Indian officials “…with the sole idea of deceiving others.”

Today, the fact remains that the building of the Indian Trade Agency in Yatung has ‘disappeared’. Mr. Le Yucheng should be asked to explain what has happened to this property of the Indian government in Tibet; it would be useful to have a rest house in Tibet for the yatris on their way to Mount Kailash.