Maoists are enemies of India - I

While the killing of Osama Bin Laden has dominated the Indian media space and the mind space of the Indians, the killing of eleven security personnel in Jharkhand by Maoists on 3rd may 2011 has been dismissed as routine. India may have to pay dearly for this indifference and insensitivity.

This article assess the Maoists situation as it obtains particularly in Jharkhand and Bihar. It is based on a very recent field tour by this author. It emerged from the interactions with various segments of the society as well as the administrators and security personnel that the overall intensity of the Maoist menace is certainly not on the decline. Even though in certain areas of Bihar the situation has abated, the Maoists are seeking to enlarge their influence in new areas.

One police official in Bihar lamented the fact that while the judiciary does not spare criminals, hard-core Maoists charged with dozens of murders are being granted bail. They come back only to unleash fresh round of terror.

In Jharkhand, the state authorities, given their some fresh administrative initiatives and expansion of security forces, are sanguine about rooting out the problem in a timeframe ranging from 5 – 15 years. This ambiguous time span in itself is indicative of the level of threat posed by the Maoists.

Certain revelations during the tour exploded many myths that the benefactors and ideologues of the Maoists have assiduously built over the years.

It is only in the last three or four years that the entire Maoist movement has sought to be portrayed as an uprising by tribes in the forested areas of Jharkhand, Chhattisgarh, Orissa and Andhra Pradesh.

As far as Jharkhand is concerned, it is pertinent to mention that the population of adivasis in the state is about 30 percent. Of the 24 districts, not more than five districts have tribal majority. These are situated on the west, bordering Chhattisgarh and Orissa the epicenter of the Maoists. The proximity of the epicenter is responsible for the high intensity of Maoism in these districts rather than tribal issues. The spread of Maoist terror is indifferent to the concentration of tribal population in the 20 out of 24 affected districts of Jharkhand. The casualty figures for 2009 are an indicator — Ranchi – 44, East Singbhum – 34, Latehar – 29, Khunti – 23, Bokaro – 22, Gumla – 21, West Singbhum – 20. The level of intimidation and coercion in these areas is very high. Not even army personnel are being spared from extortion. 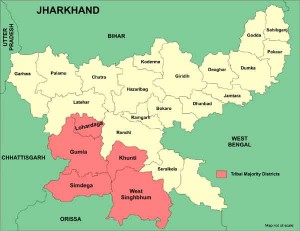 There is no displacement of tribal population on account of mining in Jharkhand. Also, the majority of the tribal have land-holdings. The problem of sharing of subsistence on forest produce is negligible.There are also no issues about exploitation of tribal by non-tribal. There is great deal of harmony between the two, not only in the towns of Jharkhand but the villages as well. The non-tribal are very much part of the fabric of society. The children of tribal and non-tribal go to the same schools, and given a geographical area have the same primary occupation. Amongst the people of Jharkhand, there is no ill-will, rancor, or complaint about industrial and mining activity.

The Maoist cadres and their local leadership are both tribal and non-tribal. There is no language divide between the two as the lingua franca across the state is Hindi. Culturally too, a great deal of synthesis has taken place over the years.

If the issue was only of tribal disaffection, the casualty (fatalities) would not have been so high in Bihar, especially in the backdrop of the widely hailed good governance in the state for the last six years.

Following the incident of killing of Inspector Tete in September 2010, there are reports about fissures in the Maoist ranks on ethnic lines. Otherwise, the Maoists have never tried to create or exacerbate any tribal or non-tribal divide, as it hurts their cadre recruitment and mobilization drives, and also has the potential to provoke the spawning of a counter revolutionary force, which would be detrimental to their political and financial interests. The “tribal displacement – forest rights – exploitation” label is a deliberate creation of the section of over-ground Maoists thriving in the garb of media, doctors, lawyers, intellectuals, NGOs, social workers and their international benefactors.

About 30 out of 38 districts of Bihar are impacted by the Maoist insurgency. The state has a tribal population of not more than one percent. There are no tribal majority districts in Bihar and yet the State continues to grapple with the Maoist menace, especially in areas like Gaya, Aurangabad and Sasaram, which are contiguous to Jharkhand. The intensity of Maoist violence in some pockets of these areas is as alarming as in the worst pockets of Chhattisgarh and Jharkhand.