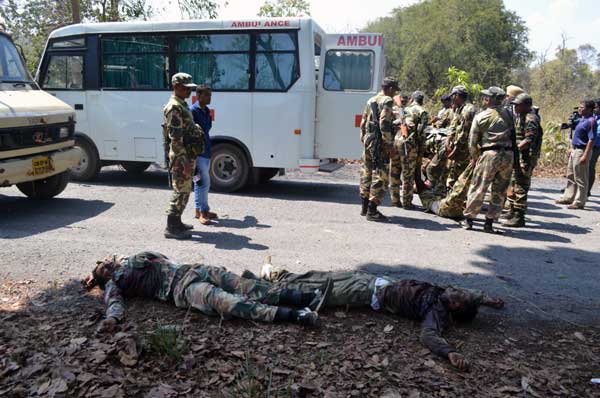 In yet another ambush by the Maoists in Sukma District, seven policemen of Chhattisgarh’s Special Task Force (STF) were gunned down and 11 were injured at Pidmal village near Dornapal in Sukma District of the Bastar Division of Chattisgarh. This ambush, which took place on the morning of 11 April 2015, had striking similarities to the one carried out four months earlier by the Maoists on 1 December 2014, in the Kasalpad forest area of Sukma district.

Set backs do happen in security force operations, but what is worrying is the explanations that came out from various quarters after every such incident.

Apparently, the right lessons were not learnt from the Kasalpad ambush and it is unlikely that any will be learnt from this one too, because the truth is unpalatable and difficult to digest.

What happened in the Kasalpad forest last December? As per the IG operations, Mr Siddhu, a CRPF company, that had commenced search operations in the area on 29 November, was ambushed by the Maoists on 1 December, while returning to their base. In the ambush, 14 CRPF personnel including two officers were killed and over a dozen injured. The Maoists looted the weapons and equipment from the slain policemen before making good their escape into the jungles. Set backs do happen in security force operations, but what is worrying is the explanations that came out from various quarters after every such incident.

In this case, Mr Siddhu stated that the company had somehow got split while returning to base and the force which came under the ambush had only about 30 men. As such, it was easily overpowered by the Maoists. Such statements are worrisome and seek to deflect attention from the real problems plaguing the security forces. The questions which need answering are, why Mr. Siddhu thought 30 fully armed men were not sufficient to take on a Maoist ambush? Why did they not hold on to their ground? Did they carry out the anti ambush drill? Why did the rest of the company not come to their rescue? The simple fact is that had the force resisted, there was no way that the Maoists could have made away with the weapons of the dead policemen. There was no resistance. Why? That is the question that should have been asked. And that is the question that needs to be answered.

Many explanations were however offered, that sought to deflect blame from where it really lay. There was a tendency to rationalise the loss, by suggesting that the police forces were ill equipped, lacked sophisticated weapons, had no intelligence, had poor communication and the like. Some reports even suggested that the police forces need drones and helicopters to fight the Maoists. All such arguments when put to the test, fail to convince.

The Maoists are in the jungle. They move from one place to another and do not have a fixed address. It is the job of the ground forces to gather intelligence and take action accordingly.

Four months down the line, history repeated itself, when 49 policemen from the STF on a search mission were ambushed. Here too, the Maoists looted the weapons and equipment of the  seven slain policemen, but to add to the ignominy, did not permit their bodies to be recovered. The bodies were eventually recovered on 12 April, when the Maoists allowed them to do so. In terms of moral domination, the Maoists had won a handsome victory. Once again, the same explanations were trotted out as given in the earlier ambush at Kasalpad forest area. The force was too small, and the rest of the spiel that was trotted out in the case of the earlier ambush, were trotted out once again.

And this will happen in the next ambush too. And the next one, and the one after that, till someone finally asks the right questions, to set the system in order.

The Maoists are in the jungle. They move from one place to another and do not have a fixed address. It is the job of the ground forces to gather intelligence and take action accordingly. In any case, when the police forces go out on a search operation, that is exactly what it is. A search operation. It means that they are looking for the Maoists. Obviously, there is every chance that the Maoists can ambush them. It is for the police forces to anticipate such eventualities and take appropriate counter measures. To keep harping on the point of lack of intelligence is betraying a lack of knowledge of how such operations are conducted on the ground.

Another common fallacy is that drones and helicopter support is required to combat the Maoists. In the jungle terrain that is obtaining in the Bastar division, drones have very limited utility. Even if a drone is in a position to give out the location of a group of Maoists, there is a wide lead time between the obtaining of such information and its synthesis and communication to the concerned police force for action. By this time, the Maoists would have moved out to a different area altogether. More importantly, it is practically impossible to discriminate between a normal villager and an armed Maoist. Drones are hence not the answer to combating the Maoists and helicopters at best can provide logistic support and be used for casualty evacuation purposes. Such assistance is already being provided by the Indian Air Force.

Not big forces, but small teams of ten men, well trained in jungle warfare, will give the desired results.

An honest answer to the questions asked above would be revealing. They would point to systemic weaknesses in the training of the police forces and the leadership provided to them. In addition, the manner in which search operations are conducted needs to be reworked. We do not need large scale operations.

On the contrary, the police forces need to deploy in a grid pattern and operate from their bases in small scale operations, in an area domination role, through well hidden ambushes, self sustained for two to three days, lying doggo for the entire duration. Through such concealed moves, the police forces will over time, be able to effectively dominate the area under their control. Not big forces, but small teams of ten men, well trained in jungle warfare, will give the desired results. They need to improve their shooting standards, develop esprit de corps, and learn to operate totally concealed, both by day and by night, all the time keeping the area under surveillance. Most importantly, they require leadership of a very high order.

It would be advisable, if the battalion commanders stay with the men on the ground and officers of the rank of DIG and IG also establish their headquarters in the jungles of Bastar Division. It has been said that history repeats itself because men repeat their mistakes. That is not true. History repeats itself because we do not record the truth. Let us make a start by changing the narrative in the Bastar Division. Else we will be failing the men who have put their lives under our care.

One thought on “Maoist attacks: Hunters become the Hunted”