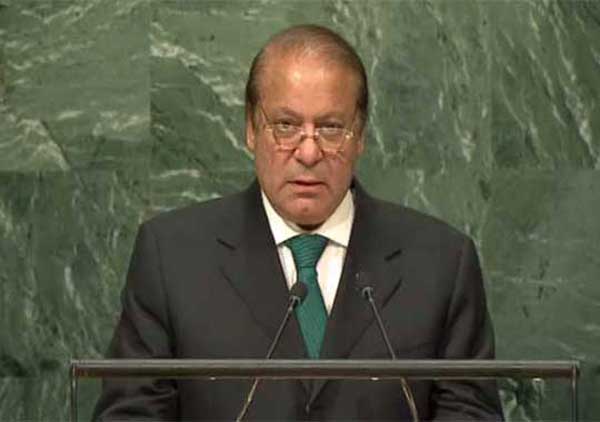 Those who saw live coverage of Pakistan Prime Minister’s live speech at the 71st session of United Nations General Assembly (UNGA) would have been shocked and dismayed at the candor, demeanor and a straight jacket face displayed by him while making reference to issues that perpetrate out of its territory and as its stated policy that are the root causes of instability in the region.

Pakistan had probably tasted blood and learnt to effectively use non regulars as instruments of its state policy.

Consider the following statements made from pedestal of the highest international organ; United Nations.

“My country has been the principal victim of terrorism including that supported, sponsored and financed from abroad.” “We will not allow externally sponsored terrorism and threats of destabilization to cause turbulence in Pakistan.”

The statement appears to be satirical in the backdrop of clinching and irrefutable evidence that Pakistan is the fountain head and biggest architect of nurturing outfits that use religious indoctrination, violence and use of terrorism as a tool to achieve their stated objectives.

Historically these can be traced back to day when it came into existence. Use of irregulars for invasion of Kashmir in 1947 was the first instance Pakistan unleashed armed intruders on a helpless Kashmiri population. Timely and resound action by Indian Army forced the retreat of raiders until Prime Minister Nehru declared a ceasefire.

But Pakistan had probably tasted blood and learnt to effectively use non regulars as instruments of its state policy.

The use of infiltrators to precipitate insurgency in 1965 led to its comprehensive defeat at hands of Indian Army.

During Kargil Conflict the then PM Nawaz Sharif had expressed his ignorance to the actions of his army and lied to the world about non involvement of its Army.

The oppression of Bengali speaking population in 1971 and refusal to honour democratic mandate led to untold miseries against its own citizens. The use of Razakars and religious zealots  to further its agenda and violate their basic rights led to Bangladesh’s war of liberation and Indo-Pak war of 1971 leading to total annihilation of Pakistan’s armed forces and their surrender to Indian army. Pakistan continued to use these proxies post independence era until Bangladesh cracked down hard on them in recent past.

Pakistan riling under a comprehensive defeat in 1971, encouraged Khalistan proxies to detabilise Punjab. Having been again defeated, it provided tacit support to Kashmir based militant outfits to initiate violence and instability in Jammu and Kashmir.

The Kargil conflict launched by Pakistan’s erstwhile Army Chief Parvez Muzharaf, again in garb of infiltrators saw their bloody eviction by Indian Army to restore the sanctity of borders and revealing that the intruders were actually Pakistan regular army soldiers. At the time of conflict then Prime Minister Nawaz Sharif had expressed his ignorance to the actions of his army and lied to the world about non involvement of its Army.

The most significant similarity between Kargil War and current situation is the commonality of political dispensation during both periods and his statements about Pakistan being the victim of terrorism.

Prime Minister Nawaz Sharif had the following to say, “In response to requests from President Ashraf Ghani, we have been facilitating the process of reconciliation in Afghanistan. There have been setbacks. That, however, is not a sufficient reason to abandon the path of peace and rely on the military option, which has failed, for the past decade and a half, to stabilize Afghanistan”.

Pakistan has done everything at its disposal to de stabilize the situation in Afghanistan.

“Progress will be assured only when the Afghan parties themselves conclude that there is no military solution to the Afghan war, and work assiduously, through a meaningful dialogue process, for achieving reconciliation and peace at home.”

Again, nothing could be farther from truth. Pakistan has done everything at its disposal to de stabilize the situation in Afghanistan. Beginning from placing a pliable Taliban dispensation in 1996, which saw innumerable instances of violence, especially against women and children, being unleashed on a hapless Afghan population until it was thrown out from Kabul in 2001, to trying to control the state of affairs in Afghanistan through use of proxies and groups, in spite of a new power structure and constitution, Pakistan has only brought the situation to a state of chaos.

Pakistan wants reconciliation at its terms and is the biggest impediment in bringing peace to the region. The process of dialogue has failed because Pakistan has refused to cooperate and restraint Taliban that operate out of its territory and functions as its tutelage. The violence unleashed by Taliban and its proxies in Afghanistan is the biggest reason for instability in the region. Yet Pakistan claims to be a well wisher of Afghanistan.

Maximum time of his speech was devoted to India with emphasis on Kashmir. He said “Pakistan wants peace with India. I have gone the extra mile to achieve this, repeatedly offering a dialogue to address all outstanding issues. But India has posed unacceptable preconditions to engage in a dialogue. Let us be clear: talks are no favor to Pakistan. Talks are in the interest of both countries.”

Prime Minster Sharif’s claim of going extra mile to achieve peace with India falls on its face with the whole world knowing that it was Prime Minister Modi who initiated the fresh process of peace with Pakistan by inviting Sharif to his swearing in ceremony, surprising everybody.  This was followed by other conciliatory gestures only to be vitiated by Pakistan at the behest of orders from Rawalpindi. Talks again in Paris, during Climate Change Summit, and Modi’s unscheduled stopover in Lahore on Christmas Day in 2015 were again PM Modi’s initiatives to put relations back on track. But these were quickly followed up by the New Year attack on Pathankot air base. Since then the relations have been on a downward spiral.

Killing of Burhan Wani a young face of insurgency and the violence that followed was an unexpected opportunity that came Pakistan’s way and it fully exploited the situation in Kashmir Valley.

Indian response to Sharif’s address was sharp and crisp, it is hoped that Indian Foreign Ministers address to the UNGA in the coming days would bring out the role of Pakistan more explicitly…

Again nothing could be farthest from the truth.

What however is well known to the world is that Pakistan is the biggest perpetrator of conflicts in the region, is doing everything at its disposal to fester instability, is chief promoter of terrorism around the globe, follows no democratic norms and violates Human Rights with impunity.

Although Indian response to Sharif’s address was sharp and crisp, it is hoped that Indian Foreign Ministers address to the UN General Assembly in the coming days would bring out the role of Pakistan more explicitly using the latest Uri incident as evidence to strengthen the case for putting a tag on Pakistan of a country that promotes terrorism.